'Moral Week Of Action' Takes Off 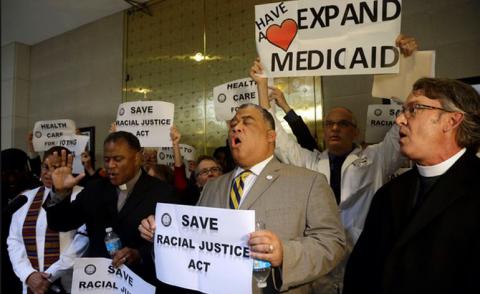 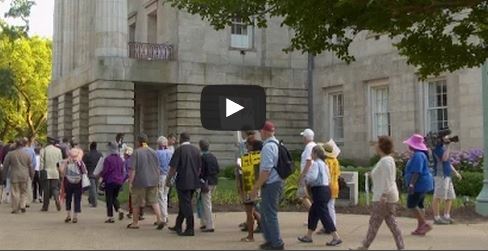 North Carolina’s Moral Mondays Movement on Friday launched a “Moral Week of Action” that will run through Thursday to demand that Republicans “repent and repeal” their public policy attacks on the human and civil rights of North Carolinians.

Each day of action emphasizes a different issue:

August 22 – Labor Rights, Fair and Living Wages, and Economic Justice: North Carolina’s GOP leadership opposes increasing the minimum wage. House Speaker (and U.S. Senate candidate) Thom Tillis called raising the minimum wage a “defeatist mentality.”, and said it is “a decision that the legislature needs to make with business.”. Moral Mondays demonstrators who waited for 10 hours in Tillis’ office were handcuffed and hauled away on charges of “trespassing.” As United Steelworkers president Leo Gerard wrote: “The way GOP hardliners see it, Tillis is the Speaker. He speaks, and everybody else shuts up and listens.”

August 23 – Education and Criminal Justice: In 2013, the GOP-led state General Assembly launched a sweeping assault on public education. Republicans passed tax cuts for corporations and the wealthy — eliminating $684 million in revenue that could have benefited public schools — froze teacher salaries, and eliminated pay raises for advanced degrees. Republicans also repealed the state’s Racial Justice Act, which prohibited seeking or imposing the death penalty on the basis of race and allowed death row inmates to challenge their sentences on the basis of racial discrimination.

August 24 – Equal Justice Under The Law: The state’s “sodomy law” remains on the books. State law and a constitutional amendment ban same-sex marriage and other same-sex unions. The state’s anti-discrimination and hate crime statues do not include sexual orientation or gender identity. The state Republican party’s platform condones anti-gay discrimination.

August 25 – Youth Moral Monday: North Carolina’s GOP has restricted youth voting by preventing college students from using their student IDs as voter identification, and proposed legislation to tax the parents of college students who register to vote at their college campus instead of their home town.

August 26 – Women’s Rights: In 2013 the Republicans launched a “sneak attack” on reproductive rights by raising licensing standards too high for most clinics to meet. Tillis led the charge to pass the infamous “Motorcycle Vagina Bill,” which added dangerous abortion restrictions to a motorcycle safety bill. Tillis also blocked a paycheck fairness act in the Assembly.

August 28 – Voting Rights: Buncome County GOP precinct chair Don Yelton told the Daily Show that North Carolina’s voter ID law would “kick Democrats in the butt.” Yelton added, “If it hurts a bunch of lazy Blacks that want the government to give them everything, so be it.” Yelton lost his position, but the voter ID law — which requires voters to present government-issued photo IDs, and shortens early voting — still stands. The Moral Monday organizers plan a “Vote Your Dreams, Not Your Fears” voter registration and mobilization rally to end the week of action, and are encouraging other organizations to mount their own voter registration drives this week.

Last summer, thousands of North Carolina residents came together to respond to the Republican-led legislature’s “mean-spirited attack” on the state’s most vulnerable residents. Conservatives dismissed them as “crazies,” but their numbers swelled to thousands as diverse communities were united by Rev. Dr. William Barber’s “fusion politics.” Today that movement has spread to 12 more states. Alabama, Arkansas, Florida, Georgia, Indiana, Mississippi, New York, North Carolina, Ohio, Pennsylvania, Tennessee, and Wisconsin have announced their own “Moral Week of Action” events.

The North Carolina movement that so captured the imagination and inspired the hopes of progressives has now spread across the country, in the spirit of the movement’s popular chant: “Forward together, not one step back!”