For Dessert, May I Recommend the Buglava?

An argument for additional alimentary arthropods 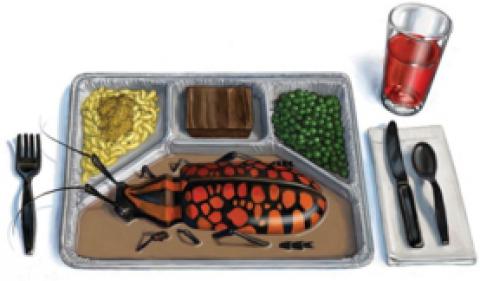 The recipe for wild mushroom risotto starts with the ingredients list. The risotto includes rice, garlic, minced onion and vegetable stock. The mushroom mixture contains half a pound of wild mushrooms, garlic, butter, thyme, 12 grasshoppers with the legs and wings removed, and two thirds of a cup of buffalo worms, along with salt and freshly ground black pepper. Julia Child has left the building.

Entering the building are Arnold van Huis and Marcel Dicke, entomologists at Wageningen University in the Netherlands, along with chef Henk van Gurp, from the nearby Rijn IJssel Vakschool, which teaches hotel and tourism management. The wild mushroom risotto recipe is one of 32 in the frying Dutchmen's new volume, The Insect Cookbook: Food for a Sustainable Planet.

Americans may involuntarily utter “Gurp” as they contemplate dishes rich in grasshoppers and buffalo worms, the larvae of a rather handsome beetle. Therefore, the meat of the book is its essays discussing the value of incorporating insects into culinary cultures that have mostly eschewed them.

More than 1,900 insect species are on the menu in great swaths of the world. “People in Asia, Africa and Latin America do commonly eat insects,” the authors say, “not because of hunger, but because they are considered special treats.” Indeed, insects in these regions can be more expensive than meat. The authors note that an analogous situation exists in Europe, where meat can be less pricey than shrimp. And shrimp, being fellow arthropods, are much closer morphologically, but for some reason not yuckitudinally, to insects than to cows or chickens.

Of course, Americans already eat plenty of insects. “Apples sometimes have an insect or two in them—and these just get ground up … and become part of the applesauce and juice,” the authors point out. “The same goes for tomatoes and ketchup, grains and bread, coffee beans and coffee, and a long list of other foods.” The most healthful ingredients in your burger and side of fries may be the insect bits in the bun and ketchup.

And that does not include any foodstuffs such as red candy or strawberry yogurt that contain the dye carmine. This red additive comes from the smashed bodies of a scale insect called the cochineal. In 2012 news of the presence of carmine in six Starbucks offerings quickly got the coffee giant to switch to a tomato-derived replacement dye. Personally, I'd keep the carmine and get rid of almost everything else in the products, which included the raspberry swirl cake, the mini doughnut with pink icing and the red velvet whoopie pie.

The push to increase the attraction of insects as food for people comes from two population figures. First, the human population of the planet is expected to reach nine billion by the middle of this century. Second, the population of insects may be as high as 10 quintillion. The authors put that stat in what may seem to be more accessible terms but is still perhaps merely mind-blowing: “For every human being on Earth, there are between 200 million and 2 billion insects.” Put down the spray gun, you're surrounded.

Those nine billion people will need protein, and cultivating insects is far more efficient than producing other animal foods, especially beef, in terms of land and water use and the feed-to-food conversion ratio: about two pounds of feed will get you a pound of edible crickets, compared with 25 pounds of feed for a pound of beef. If we want a comeback of small farmers, it may be through farming these small critters.

So, as The Insect Cookbook recommends, think of grasshoppers as land shrimp. Call locusts sky prawns. Frenchifying it to a bonbon sauterelle could help the grasshopper bonbon hop off shelves. As my, and seemingly everybody else's, mother used to say upon the discovery of an insect in our food, “It's just a little extra protein.”

This article was originally published with the title "It's a Cookbook!."

Steve Mirsky has been writing the Anti Gravity column since a typical tectonic plate was about 34 inches from its current location. He also hosts the Scientific American podcast Science Talk.