Impatient hedge-fund billionaires do not attempt to conceal their contempt for the rest of us. They are used to making money—fast. Witness what they have done to large segments of the overall economy. Education does not thrive in those conditions, because there is no standard of perfection in any schoolhouse that can survive brutal suppression of uniformity imposed by clumsy testing. A successful school not only makes room for dissent. It constantly nourishes it. 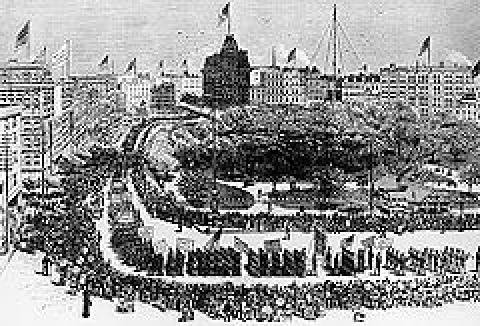 I know this sounds absurd—it is absurd—but for some odd reason Labor Day reminds me of my mother. She was a school teacher, and I think she would have a good laugh to learn that so-called “education reformers” are accusing school teachers of being too powerful and protected. My father, who was himself a long-time member of our local school board, would probably snort at the ignorance of highly educated experts.

Together, they could set the record straight on education from the facts of their own lives. They fell in love when they were young and optimistic and talented. This was the 1920s when women had just won the right to vote, and both were newly graduated from four-year colleges—the very first in my mother’s family. My father completed graduate work in chemistry and was hired as a researcher by a Philadelphia manufacturer where he later invented useful products.

They faced one obstacle in their promising lives. My mother had to sign a teaching contract with a local school district in western Pennsylvania that would prohibit her from getting married. This crude violation of a young woman’s civil rights was commonly enforced around the country. Years later, I learned that my wife’s mother had to do the same thing to get a teaching job in Iowa. Recently, I reread the steamy love letters my parents wrote to one another during that school year of frustrated desire. I blushed for them.

At the Thanksgiving break, they abandoned abstinence and broke the school contract. But secretly. On the long holiday, they eloped to West Virginia and got married there. They told no one. My parents, I should add, were no-nonsense conservative Republicans, not given to reckless adventure or inflammatory political statements. I did think of my mother as an assertive proto-feminist. In retirement, both became Democrats because they thought Goldwater was a dangerous crackpot. In 1972, my dad declared early for George McGovern, while Mom held out for Shirley Chisholm.

Keeping the secret of their marriage may have been done to protect her eligibility for many more years as a teacher. It worked. Toward the end of her long life (she died three days short of 100) my mother got a letter each year from Ohio governors, congratulating her on being the oldest living recipient in Ohio’s teacher retirement system.

I tell this intimate story to make a point that the latter-day reformers do not seem to grasp. They have left out the human dimensions of a harsh labor market where women were regularly punished for not being men. School teachers from the beginnings of America’s public schools have been vulnerable to blatant exploitation—lower wages and harsher terms—and they have been exploited. The jobs could be filled by an abundance of educated single young women in need of incomes. Married women might have babies in the middle of the school year—an inconvenience to school administrators—so married women were banned. Similar gender biases affected nursing and other caring occupations, and to some degree still do.

The fundamental power shift for school teachers did not occur until the 1960s, when frustrated teachers rebelled against traditional school systems run top-down by superintendents and principals. As a young reporter in Louisville, Kentucky, I witnessed one of the early skirmishes in 1962.

One day I got a phone call from an organizer for the American Federation of Teachers who blithely announced that AFT intended to shut down the Louisville schools the following week with a citywide strike. I thought he was joking. AFT was based in East Coast big cities and had no more than fifty members among Louisville’s 2,000 teachers. The National Education Association (NEA) dominated most states those days, and it was run by and for the administrators, not rank-and-file teachers.

The AFT’s strike in Louisville was like a thunderclap—teachers did walk off and virtually shut down the system. Teachers were fed up. They were demanding a stronger voice and power in school affairs and school politics. In rural states like Kentucky, the poorest counties were frequently dominated by matriarchal political machines—women superintendents who controlled more jobs in their county than the men in county offices. The NEA got the message and swiftly adjusted. It became a full-fledged labor union like AFT. Instead of fronting for old-style political bosses, both organizations now try to speak for the interests of teachers and to defend them against political intrusions and other abuses.

These are the relevant facts that self-appointed billionaire reformers skip past. By demonizing the teachers unions and denouncing the tenure laws that protect teachers from arbitrary political reprisals, the do-good foundations have unwittingly cast themselves as a malevolent Daddy Warbucks ready to bury their opposition with tons of money.The Gates Foundation and some others do seem to be belatedly backing away from obvious mistakes, but the reform engine still threatens to undermine the common public school in favor of a deeply fractured system of sectarian and secular private sponsors claiming public money.

Impatient hedge-fund billionaires do not attempt to conceal their contempt for the rest of us. They are used to making money—fast—with no excuses for dawdlers. Witness what they have done to large segments of the overall economy. Education does not thrive in those conditions, because there is no standard of perfection in any schoolhouse that can survive brutal suppression of uniformity imposed by clumsy testing. A successful school not only makes room for dissent. It constantly nourishes it.

Of course, I am biased. But I think that was my mother’s teaching style. She taught first grade in an “inner city” neighborhood of Cincinnati where the students were not not poor black kids but white kids from the mountains of Eastern Kentucky. They shared many of the same handicaps. Mom developed her own theories on how to teach reading to such children. It inovlved hand-eye coordination and other elements I could not follow. I have no proof that she succeeded, but I have a hunch she drove the principal nuts.