When the District Attorney says, "we'll present the evidence and let the grand jury decide," that's malarkey. If he takes that approach, then he's already decided to abdicate his role in the process as an advocate for justice. At that point, there's no longer a prosecutor in the room guiding the grand jurors, and — more importantly — no state official acting on behalf of the victim, Michael Brown... 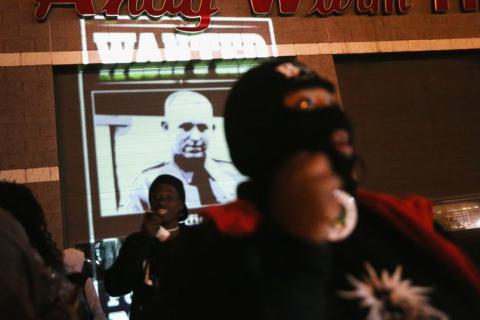 The grand jury responsible for deciding whether Ferguson, Missouri, police officer Darren Wilson should be indicted for the shooting death of Michael Brown has returned its answer: no.

Wilson won't be charged. He won't be arrested. He won't face any criminal consequences for shooting and killing the unarmed black 18-year-old on August 9.

St. Louis County Prosecuting Attorney Bob McCulloch made the announcement in a statement Monday night, during which he said that Wilson knew that Brown was a robbery suspect at the time he shot him.

Still, many are wondering how it's possible that 12 men and women who've been investigating the case since September didn't conclude that there was probable cause to believe a crime had occurred.

After all, witnesses who've spoken to the media have given same basic description of Brown's final moments: he had both hands in the air when Wilson fired the shots that killed him — a narrative that made "hands up, don't shoot" the rallying cry for protestors that flooded the streets of Ferguson after the shooting, demanding an indictment for Wilson.

In his statement, McCulloch said that some of the witnesses changed their stories and were unreliable. Some of them, he said, were "making it up."

That determination explains in part why Wilson wasn't indicted. Here are the other reasons that this outcome was somewhat predictable.

The law makes it easy not to charge police officers 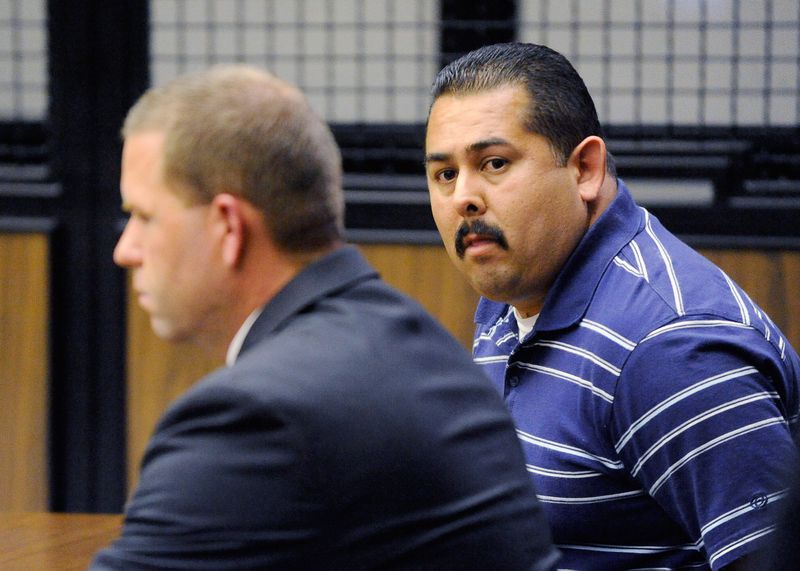 A rare sight: two California police officers on trial for the death of a homeless woman in 2011. (Paul Rodriguez/Pool/Getty)

But most of these weren't realistic options. All along, legal experts have said that it was unlikely that Wilson would be charged with first-degree murder. That would have required evidence that he maliciously set out to kill Brown. Second-degree murder charges were theoretically possible, but this choice was unlikely if jurors decided that Wilson feared for his life when he killed Brown.

If jurors concluded that Wilson was negligent when he shot Brown, they could have gone with a charge of voluntary or involuntary manslaughter. That was somewhat more likely.

It's important to note that ten out of the twelve grand jurors would have had to agree to indict. That means only three jurors needed to agree that there wasn't enough evidence to charge Wilson — but that's still a lower standard than a full trial, where a jury would have to unanimously agree that he should be convicted.

But here's the key fact: Wilson was a police officer. And the law is relatively easy on police officers who kill people in the line of duty.

When police officers are allowed to use deadly force 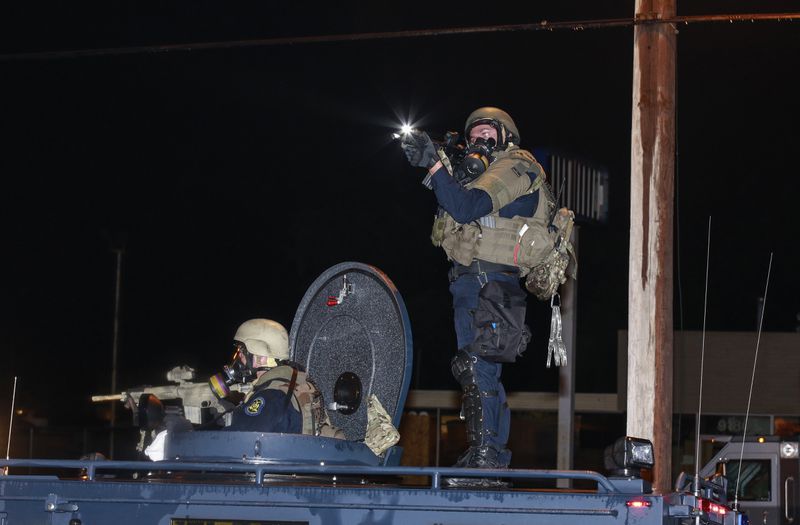 Police officers were armed during the protests following Brown's death — but probably wouldn't have been justified in shooting. (Bilgin Sasmaz/Anadolu Agency/Getty Images)

State laws, guided by a couple of Supreme Court precedents, have laid out a set of circumstances in which a cop killing a civilian is justifiable homicide.

POLICE OFFICERS ARE ALLOWED TO SHOOT UNDER TWO CIRCUMSTANCES

The Court says that "police officers are allowed to shoot under two circumstances," David Klinger, a criminologist at the University of Missouri-St. Louis and a former police officer, told Vox in August.

One circumstance is "to protect their life or the life of another innocent party" — what departments call the "defense-of-life" standard. The other circumstance is to prevent a suspected violent felon from escaping. The St. Louis County grand jury had to have decided that at least one of these applied — or both.

The Ferguson Police Department has said that Brown was a suspect in a "strong-arm robbery" (which St. Louis County prosecutor Robert McCulloch says counts as robbery in the second degree, a felony) at a convenience store that occurred just before he was stopped by Wilson. Previously, officials had been inconsistent on whether Wilson actually knew about the robbery when he stopped Brown, although McCulloch said Monday that Wilson did know.

If the grand jury was convinced that Wilson believed Brown to be a violent felon, the police officer would still only be able to claim that he was justified — if Brown was fleeing when Wilson fired at him.

Was it "objectively reasonable" for Wilson to fear for his life? 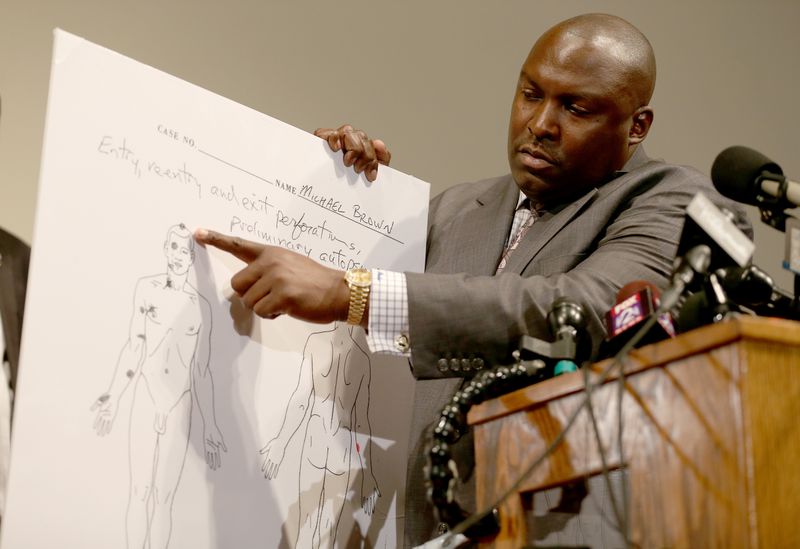 A press conference reveals the results of an independent autopsy of Michael Brown's body. (Joe Raedle/Getty)

Given what's known about Wilson's account of the shooting, it's most likely that the grand jury decided Wilson was justified under "defense-of-life" — that he feared for his life when Brown (in his telling) assaulted him in his car and tried to grab at his gun. In that case, the next question will be whether it was reasonable for him to be afraid of Brown.

Under the law, it doesn't matter if Brown ever intended to hurt Wilson. What matters is the officer's "objectively reasonable" belief that he was a threat. That puts a lot of weight on an officer's immediate instincts in judging who's dangerous.

Forensic records indicate that the final two shots Wilson fired, the ones that killed Brown, were fired into the top of Brown's bowed head. Several eyewitnesses have said that Brown was attempting to surrender when the final shots were fired, whereas Wilson's account (which has only been heard publicly secondhand) is that Brown's head was down because he was trying to charge at Wilson.

Those last shots were important, because each use of deadly force has to be evaluated separately to determine if it was justified. "The moment that you no longer present a threat, I need to stop shooting," said Klinger. Of course, he added, "there's a difference between the moment you cease to be a threat and the moment I perceive that you ceased to be a threat." Walter Katz, a California attorney who specializes in oversight of law enforcement agencies — particularly during use-of-force investigations — told Vox in August that that if an officer has been assaulted and the suspect runs away, the officer's threat assessment is probably going to be shaped by having just been assaulted.

Jurors may have chosen not to indict because they decided that each time Wilson shot Brown, he reasonably believed Brown represented a threat to him or others.

How could they conclude that Wilson's belief that Brown posed a threat was reasonable, if the teen had his hands up when Wilson fired his last shots — as many eyewitnesses have publicly said? McCulloch suggested the jurors were presented with conflicting eyewitness testimony about Brown and Wilson's interactions in the moments before the deadly shots were fired, and the story witnesses told the media is not the same story jurors necessarily heard.

The prosecutor's tactics made a charge less likely 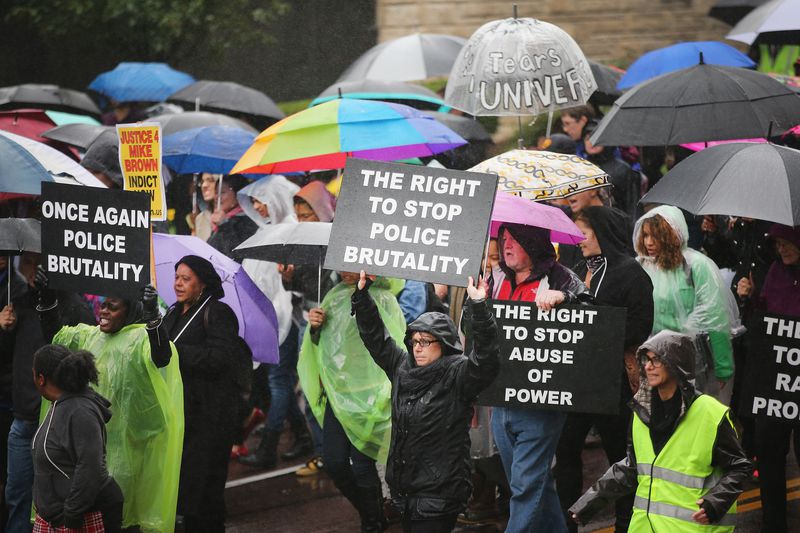 Protesters calling for the indictment of Darren Wilson in October. (Scott Olson/Getty)

McCulloch, the St. Louis County prosecutor, had a lot of discretion when it came to how to handle this case, and he used it in ways that experts said could have made an indictment less likely.

Instead of telling the grand jury what charges Wilson should face and letting the jurors hear from a detective or a couple of main witnesses, McCulloch chose to present them with every single piece of available evidence and hear every single witness — "every scrap of evidence," as he put it — and let them decide for themselves.

So when a District Attorney says, in effect, "we'll present the evidence and let the grand jury decide," that's malarkey. If he takes that approach, then he's already decided to abdicate his role in the process as an advocate for justice. At that point, there's no longer a prosecutor in the room guiding the grand jurors, and — more importantly — no state official acting on behalf of the victim, Michael Brown...

Then, when you add to the mix that minorities are notoriously underrepresented on grand juries, you have the potential for nullification — of a grand jury declining to bring charges even when there is sufficient probable cause. That's the real danger to this approach.

Kevin Curran, president of the Missouri Association of Criminal Defense Lawyers, told Vox that the choice to use this tactic instead of presenting "an advocate's case" — which McCulloch could have done by arguing for one ore more specific charges against Wilson using a few key witness statements — made an indictment much less likely.

And the sheer volume of evidence they heard made it more likely that they'd be left to grapple with the type of conflicting statements that could lead them to conclude that there was not probable cause that a crime had occurred, Curran said.

In an interview Vox's Amanda Taub conducted with David Rudovsky, an expert in police prosecutions, he explained that various stages of the criminal justice process — from being investigated by police peers, to being prosecuted by attorneys who work closely with police, to natural jury bias toward law enforcement — makes it rather rare for cops to go to jail for misconduct on the job. This plays out not just in Ferguson, but across the nation.