How Ferguson Changed America ... and Me

But for both America and me, Ferguson was different, because it was now. Because of social media, the 24-hour access to media and the domino effect of protests that rippled through cities across the country, white America could finally see up close what was going on. 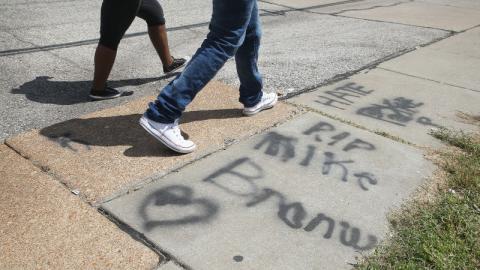 On Aug. 9, 2014, in Ferguson, Mo., a police officer named Darren Wilson fired at least six bullets into the head and body of an unarmed, 18-year-old named Michael Brown Jr. Four hours later, they finally removed Michael Brown’s body from the sweltering heat and took his corpse to the St. Louis County morgue.

As crowds gathered, investigators found a scene so volatile, so dangerous, it caught them by…

By the next day, America, Ferguson and I would forever be changed.

Some people called it a riot. Others referred to it as “unrest in Ferguson,” while others called it a protest. It was simultaneously all of those things and none of them. It was a cry for justice and equality. It was unleashed anger. It was an SOS from black America to the world. It was a temper tantrum and a plea for help that forced this country to notice and address police brutality forever, and I know, because I was there.

America has always ignored the way the people in whose hands it places authority treat her darker-skinned citizens. Whether this country’s indifference is willful ignorance, apathy or the intentional turning of a blind eye can never be known, but it is an immutable fact. History teaches it. Statistics prove it. Black people’s mistrust of the law reflects it. The attitudes of white people show it to be true.

I arrived in Ferguson three days after Mike Brown had been killed. I had seen the uprisings on every news channel and read about them in newspapers and on the internet. I want to say that I was there because I am a hard-core activist who fights for the rights of my people, but that would not be true. To this day, I cannot give a rational explanation for why I drove nine hours alone in the dead of night across four states. I can only say that—for some reason—I knew I had to be there.

I have never been abused by an officer of the law, but if you are black in America, you are a victim of police brutality. It is in the way your heartbeat quickens at the sight of flashing blue lights—even when you have done nothing wrong. It is in the necessity of sitting in the front seat with your 16-year-old son or daughter and teaching him or her how to parallel park, how to change lanes and how to nonthreateningly reach for his or her license and registration so that he or she will not be killed.

When I parked on Canfield Drive, there were no Molotov cocktails or looters looking for liquor bottles or flat-screen televisions. I helped unload a truck with diapers for people who could no longer go to their corner store. I helped pass out lunches to children who missed their midday meal because they couldn’t go to school. America saw 10-second clips of a McDonald’s being burned down and people yelling at police. I saw a neighborhood and country trapped in a mixture of shock, anger and helplessness.

America had seen this before. Black people rioted after the Rodney King verdict, after Martin Luther King Jr.’s assassination and when Nat Turner planned a slave revolt. White people rioted at the Boston Tea Party, when the Freedom Riders rolled through Birmingham, Ala., at Donald Trump rallies, and whenever their teams finally won the Stanley Cup or World Series. Riots are a part of this country’s DNA.

But for both America and me, Ferguson was different, because it was now. Because we were there. I had never experienced the unbridled combination of unrepentant anger and desperation in person, and neither had America. Because of social media, the 24-hour access to media and the domino effect of protests that rippled through cities across the country, white America could finally see up close what was going on. They could no longer turn their heads and plug their ears. It was in their faces.

I, like most of this country, had been spoon-fed the whitewashed notion of respectability. We had been brainwashed into believing in the transformative power of nonviolent protest and peaceful assembly. This nation and I were two generations removed from the struggle for civil rights. We had come to believe that our incremental achievements were because we marched and sang freedom songs.

We had forgotten about the sacrifice. We had both been led to believe that we were better off when the apple cart sat upright, and we waited patiently for the world to change. The fact that no movement in the history of mankind has ever been achieved without blood and broken windows had totally slipped our minds. This country has never worked that way. The world has never worked that way.

Isn’t that the American spirit they tout in patriotic speeches and car commercials? Isn’t that same unwillingness to go quietly into the good night, unafraid to be kicked in the teeth, the perpetual spark that lights the torch of liberty?

Regardless of how anyone feels about Ferguson, Mike Brown or the unrest his death engendered, it undeniably worked. The city government was forever changed. America is feeling the repercussions to this day. Whether or not police departments have changed their practices, they can no longer do it in the dark.

I know. They know. America knows, and the nation can’t pretend that it doesn’t.

Michael Brown Jr. is dead now. His existence was snuffed out for no other reason than that he was a black boy in America, thus making him disposable. To the man who killed him, he was nothing. Yet like everything that we have ever touched, we picked up his discarded pieces and turned him into something. He is not gone. He is not forgotten.

Both he and I were silent for a moment, and then he whispered something else. I still don’t know if he was talking to me or to himself because he was looking at the ground when he whispered, “There was so much blood.”

Michael Harriot (@michaelharriot) is a staff writer at The Root, host of "The Black One" podcast and editor-in-chief of the daily digital magazine NegusWhoRead.