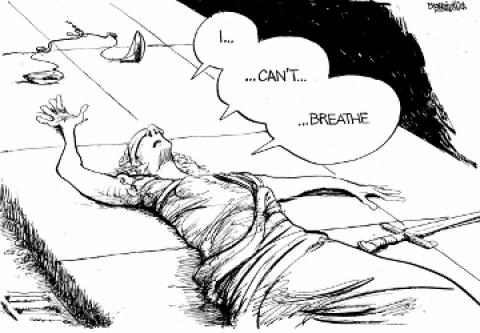 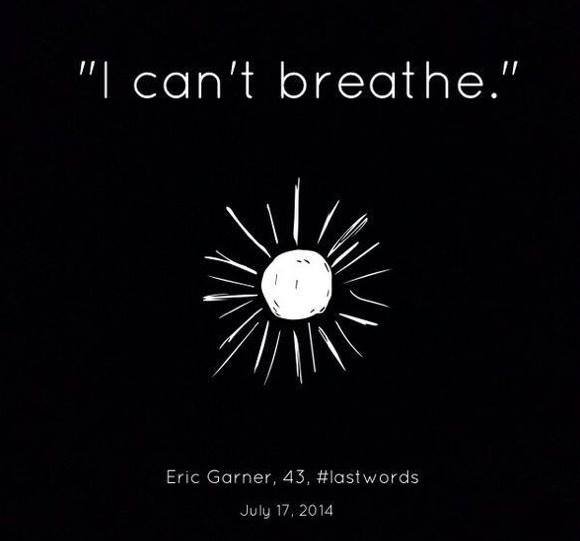 The death of Eric Garner by an illegal chokehold is only one example of unwarranted practices and the use of excessive force exercised by some NYPD officers. Our thoughts and prayers go out to the Garner family who now join the ranks of the families of Emmett Till, Trayvon Martin, and Mike Brown who have not only tragically lost a son, husband and father, but have now been denied justice.

We are outraged that the Grand Jury failed to indict Daniel Pantaleo in the death of Eric Garner. The failure to recognize that black and brown lives matter is evident throughout all five boroughs, as New York's communities of color suffer the brutality of hyper-aggressive policing and are too often denied meaningful accountability of officers who to choose to use excessive and deadly force.

We demand accountability for officers who use excessive and deadly force in communities of color throughout our city."

How can anyone in the community have faith in the system now?

How can anyone in the community have faith in the system now? First Ferguson, now Staten Island. The Grand Jury's failure to indict sends the clear message that Black lives don't matter. But they do. It's bad enough that broken windows policing over something as harmless as selling untaxed cigarettes led to this tragic killing; it's even worse when the officer responsible - who was caught on tape using a prohibited choke hold, no less - is not held accountable. The problem isn't one officer, though: it's systemic. We need real reform of discredited broken windows policing and of the NYPD more than ever. With the court-ordered joint reform process in our class action stop-and-frisk case Floyd v. City of New York finally getting underway, we have that opportunity. 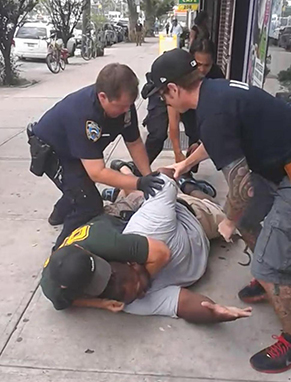 Day of Action, Thursday at 5:30 in New York City at Foley Square to demand justice for Eric Garner and an end to discriminatory policing.
New York Civil Liberties Union

On July 17, Eric Garner, a black 43-year-old father of six and grandfather of two, died after NYPD officers held him in an illegal chokehold while Garner protested, "I can't breathe!" The tragedy was caught on video, and the medical examiner ruled Garner's death a homicide.

Today, the grand jury in Staten Island decided not to indict the NYPD officer involved.

The failure of the grand jury to file an indictment in the killing of Eric Garner leaves New Yorkers with inescapable questions: How will the NYPD hold the officers involved accountable for his death? And what will Commissioner Bratton do to ensure that this is the last tragedy of its kind?


We still fight for Eric Garner 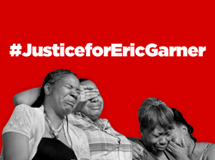 This non-indictment comes despite the fact that NYPD officers were caught on camera strangling Eric Garner to death. In a horrifying video that later went viral, Pantaleo can be seen chocking Garner as he screams out in pain, "I can' breathe, I can't breath," 11 times.

The Department of Justice (DOJ) and President Obama have a duty and responsibility to protect our community against discriminatory policing tactics and violence, especially when local prosecutors fail to do so. But the DOJ will only file federal criminal charges against Eric Garner's killer if enough of us raise our voices and demonstrate a groundswell of outrage against a criminal justice system that shields killer cops from dealing with the consequences of their deadly actions.

Join us in calling on Pres. Obama and the Attorney General Eric Holder to prosecute Officer Pantaleo under federal criminal charges and overhaul the New York policies and practices that led to Eric Garner's death:

The NYPD's unjust killing of Eric Garner is one among many, and cops who kill or brutalize Black folks are almost never held accountable for their deadly actions. In 1999, officers fired 41 shots at Amadou Diallo, killing him in his Bronx apartment; in 2006, police fired 50 shots at Sean Bell, killing him on his wedding day in Queens; and in 2012 officers targeted Ramarley Graham, broke down the door to his home without a search warrant, and killed him in front of his grandmother and younger brother. In all of of these horrifying cases, the District Attorney's office failed to secure a guilty verdict. And some of the officers involved in these deadly altercations were even allowed to remain on the police force with their gun-carrying privileges restored.

Now, with the inhumanity and racism of today's broken criminal justice system on national display, we must go above and beyond to hold our leaders accountable. We are amidst a national crisis that requires nothing short of a transformative, people-led movement to end white supremacy and police brutality. Law enforcement are killing Black youth and adults at the same rate of Jim Crow Era lynchings.

Join us working together to create real-world change.

Urge President Obama and Attorney General Holder to hold Officer Pantaleo accountable for the tragic killing of Eric Garner, and to protect the 1st amendment rights of peaceful protesters.

Dear US Attorney General Eric Holder and Department of Justice,

I urge you to bring federal charges against Eric Garner's killer and investigate the discriminatory NYPD patterns and practices, such as the "Broken Windows" policing tactic that led to this tragic police killing. A New York City Grand Jury has refused to indict Officer Daniel Pantaleo who targeted and choked Eric Garner to death.

Many believe that the NYPD conducted an unlawful stop of Eric Garner; witnesses say he was breaking up a fight, not selling untaxed cigarettes as the NYPD claims. That illegal stop quickly escalated, with fatal consequences. Multiple NYPD Officers can be seen on camera, brutally slamming Garner to the ground and applying pressure to his neck despite him repeatedly saying "I can't breathe." And despite the fact that the entire deadly altercation was caught on camera, the criminal justice system has once again failed to hold a law enforcement officer accountable for choking Garner to death.

I demand that you conduct a full and thorough investigation, convene a federal grand jury, arrest and prosecute Officer Daniel Pantaleo to the fullest extent of federal law. By filing federal charges against Officer Pantaleo the DOJ could make it clear that they are prepared to uphold the value of Black life and protect Black folks from discriminatory policing tactics and police violence, especially when local prosecutors fail to do so.

According to FBI statistics, law enforcement kill Black Americans at nearly the same rate as Jim Crow Era lynching. And the NYPD's unjust killing of Eric Garner is one among many, and cops who kill or brutalize Black folks are almost never held accountable for their deadly actions. In 1999, officers fired 41 shots at Amadou Diallo, killing him in his Bronx apartment, in 2006, police fired 50 shots at Sean Bell, killing him on his wedding day in Queens, in 2012 officers targeted Ramarley Graham, broke down the door to his home without a search warrant, and killed him in front of his grandmother and younger brother and just last month an officer "accidentally" shot and killed Akai Gurley. This devastating crisis cannot continue.

We are in a historic time; the tragic police killings of Eric Garner, Mike Brown, Akai Gurley, Tamir Rice and so many others has inspired a powerful police accountability movement. And what the DOJ does in this moment will have a major impact on the future of racial profiling and police brutality in America. 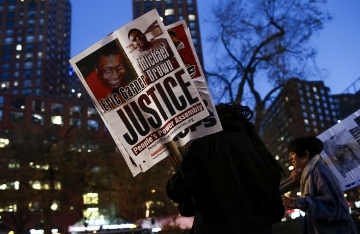 That a grand jury decided not to indict NYPD Officer Daniel Pantaleo for killing 43-year-old Eric Garner the same week where President Obama proposed spending $75 million in federal money to outfit 50,000 police officers across the country with body cameras would seem to be hack Hollywood writing with neatly applied plot points. Garner's death was caught on video-video that the police were aware was being taken-and it still was not enough to indict anyone, least of all the man responsible for choking Garner to death, for any type of wrongdoing. It's as if this decision was handed to us at this time in order to get us to say "now what?"

So. now what? We can move forward with this notion that police officers wearing body cameras will make them more judicious in their use of force, but it seems pretty clear that they just don't give a fuck, and the court system is content to allow them to keep on not giving a fuck. And we'll be right back here when they don't indict the officer who killed 12-year-old Tamir Rice in Cleveland.

So. now what? Not much, so long as the reverence paid to police officers lends itself to deference. They are not regarded as citizens also beholden to the law. They are an armed force charged with maintenance of a status quo steeped in white supremacy and anti-blackness. Key to the reign is the suspension of a belief in the rule of law. Whatever tools they require for to carry out their actual purpose, the public and the courts are eagerly ready to provide.

We keep applying the language and framework of accountability, diversity and sensitivity to an issue of oppression. We are attempting to fly an airplane with the keys to a motorcycle. Our tools are woefully inadequate, and until we are ready to admit to ourselves that the police are an inherently oppressive force, and then use the language of anti-oppression and anti-racism in our analysis and solutions, it will not end today, as Eric Garner had hoped. The dead bodies of black folks will continue to line our streets and sidewalks, and they will be treated no better than the roadkill with whom they occupy those spaces.

Last night, at an event addressing racial profiling on the campus of Vassar College, a student told their administration that putting body cameras on security guards was like "Band-Aids to a bullet hole." I was in attendance and was struck by just how literal that phrasing was. We are being choked and shot with impunity, and yet all that is being offered to us in response is a means to relive the experience over and over again. But we already do.