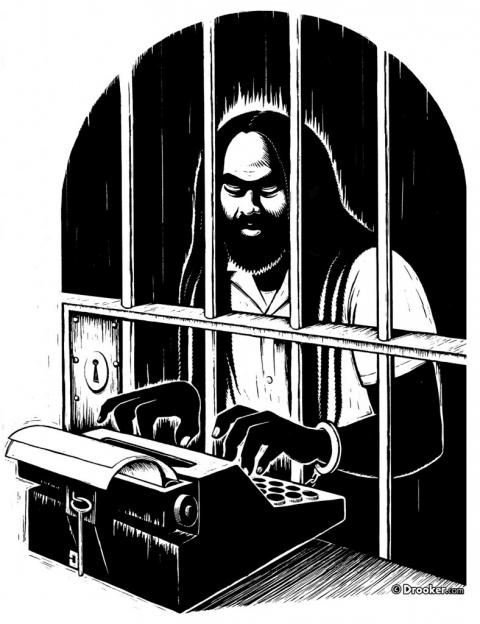 Why should journalists care about a new Pennsylvania law that limits the speech of people convicted of violent crimes? Because it could discourage valuable sources from talking to reporters—and might even block or penalize journalists for doing their work.

That’s the case made by a lawsuit filed this month by a coalition of advocacy groups, inmates, journalists, and media organizations. Philadelphia’s City Paper, Prison Legal News, and Solitary Watch are among the plaintiffs, along with individual journalists like City Paper’s Daniel Denvir and the freelance writer Christopher Moraff, who often cover criminal justice stories.

“For us, it was a no-brainer,” said Paul Wright, editor of Prison Legal News. “Probably 95 percent of our content is written by prisoners and former prisoners.”

That includes longtime columnist Mumia Abu-Jamal, the prison activist who was convicted for the 1981 murder of a Philadelphia police officer and is now serving a life sentence in Pennsylvania. It was recorded graduation speech by Abu-Jamal, delivered at Goddard College in Vermont last fall, that inspired the new law. The college announced Abu-Jamal—a former Goddard student— as a speaker on Sept. 29. The speech was delivered on Oct. 5. The Revictimization Relief Act—rebranded the “Silencing Act” by critics—was introduced by state Rep. Mike Vereb on Oct. 2. It sailed easily through Pennsylvania’s legislature, passing 15 days after its introduction with no changes to the text. Former Gov. Tom Corbett signed it into law on Oct. 21. Abu-Jamal and other prison activists filed a separate suit soon after.

Under the law, people who were victims of a personal injury crime may bring a civil action against offenders who engage in “conduct which perpetuates the continuing effect of the crime on the victim” and causes “a temporary or permanent state of mental anguish.” Prosecutors can also seek injunctions to block speech or conduct that would fall in that category.

Critics argue that this is unconstitutional prior restraint—and that the law could chill convicts’ speech in broad ways.

“For reporters who cover the criminal justice system, the law amounts to a standing gag order on an entire population of potential sources,” wrote Moraff in a Jan. 15 piece for The Daily Beast.

“It blocks or chills prisoners from coming to us as sources,” Denvir, who has also contributed to CJR, said in an interview. “And we need them to report on prison conditions, sentencing, a whole lot of different things. Even basic crime reporting. The law dissuades them from talking with us. That’s the harm.”

The language of the law is vague about what conduct might be a violation—and for that matter, who might end up in its crosshairs. Another concern raised by plaintiffs is that the act may be applied directly to news organizations or third-party publishers. Moraff, in The Daily Beast, and Denvir, in a column for City Paper, both cite testimony during the legislative debate that declared courts could stop a third party from publishing banned speech. A lawyer for the plaintiffs said in an email statement that the law might also be used to penalize journalists who quote convicts—and raised the possibility that the wildly popular podcast Serial might have been affected if a similar law had been on the books in Maryland.

In filing the new case, the ACLU of Pennsylvania and First Amendment lawyers at the local law firm Pepper Hamilton netted a diverse plaintiff coalition to demonstrate the law’s potential consequences and argue that it is unconstitutional. Seven of the 11 plaintiffs are third parties that depend upon the speech of people targeted by the law in order to inform public debate on issues like prison conditions, wrongful convictions, and criminal justice policy.

Lillian Swanson, editor-in-chief of City Paper, said Pepper Hamilton approached the alt-weekly in November to ask if it would join the suit. “We quickly agreed because of the peril the law presents to our coverage of criminal justice issues and because it violates free speech,” Swanson said in an email.

The plaintiff coalition does not include the state’s leading dailies or press association. The Pennsylvania NewsMedia Association did oppose the law, however. In an Oct. 14 letter to state senators, the association argued that the bill raised “significant constitutional issues” and noted that similar laws in other states had been struck down. The association’s president, Teri Henning, said in an email that, “We continue to believe that the Act raises significant constitutional issues, including that it is overbroad and impermissibly restricts constitutionally-protected speech.”

I also reached out to officials at the Philadelphia Inquirer and Daily News to ask if they had considered signing on, but did not immediately hear back.