Bernie Sanders’s announcement may well signal a turning point in the domestic politics of Mideast policy. Despite his strong progressive vision, Sanders has in the past been reluctant to criticize Israel. He, like many on the American left, held up Israel in general as a progressive cause, regardless of the country’s colonial actions in the Palestinian West Bank or its illegal blockade of Gaza. 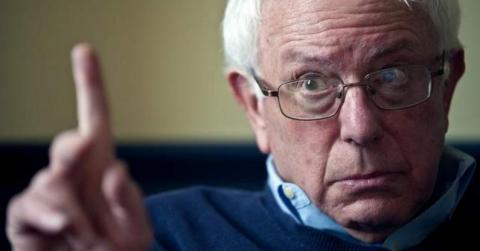 Sanders’s announcement may well signal a turning point in the domestic politics of Mideast policy.,Common Dreams

Senator Bernie Sanders, the most consistent and prominent progressive in the US Senate, has decided to skip the speech of Israeli Prime Minister Binyamin Netanyahu to Congress on March 3, which was orchestrated by Israel’s ambassador to the US Ron Dermer and Speaker of the House John Boehner in an attempt to derail President Obama’s negotiations with Iran over its civilian nuclear enrichment program. It is Bibi’s Kanye West moment.

Sanders’s announcement may well signal a turning point in the domestic politics of Mideast policy. Sanders runs as a Socialist but might well announce his candidacy within the Democratic Party for president in the 2016 race. He can’t win, of course, but could push the electoral issues to the left. He in any case caucuses with the Democrats. Despite his strong progressive vision, Sanders has in the past been reluctant to criticize Israel. He, like many on the American left, held up Israel in general as a progressive cause, regardless of the country’s colonial actions in the Palestinian West Bank or its illegal blockade of Gaza

Obama believes that a deal can be had whereby Iran is allowed to enrich uranium for reactor fuel but through restrictions and inspections can be kept from ever militarizing the program. Boehner and Netanyahu believe that Iran’s enrichment program must be closed down to forestall the development of a bomb by Tehran. Israel is currently the only nuclear power in the region, which makes it a regional hegemon, a position it might lose if it were one of many nuclear powers.

The Israel lobbies as a project of Jewish nationalism have long depended primarily on three tactics for their success. 1) They brutally punish those critical of Israeli policy (no matter how justified the criticism) with boycotts, smears and blackballing; 2) They marshal American Jewish groups into unanimity in support of Israel regardless of the latter’s feelings about certain policies, and 3) they use political donations to shape Congressional and general political discourse on Israel in official circles.

The Israel lobbies are not by any means unique, since there are Cuban, Armenian and other ethnic lobbies. And of course there are many ideological lobbies, including that of the Koch brothers for a peculiar kind of conservatism (they say they are Libertarians but seek government policies favorable to their Oil businesses).

But the Israel lobbies are, while sometimes dealt defeat, remarkably successful among lobbies. And, whereas many wealthy conservatives might have objected to the views of Native Americans specialist Steven Salaita at the University of Illinois Urbana Champaign, none of them pressured the chancellor with withdrawal of donations on the basis of conservatism. A Jewish nationalist donor did get Salaita fired over his private tweets, done on his own time and unconnected to his position in Native American studies, about the brutality of the Gaza War. Jewish nationalist legislators or those beholden to the Israel lobbies also routinely shoot down government appointments of officials insufficiently obsequious to Israel as a cause.

Rep. Steven Cohen (D-Tenn.) is also said to be leaning toward a boycott of Netanyahu’s speech. So are a number of other Jewish Congressmen on the Democratic side. And, Vice President Joe Biden’s own decision to boycott may sway many Democrats in Congress.

This stampede of Democratic legislators away from Netanyahu’s speech disrupts principles 2) and 3) above, and makes it difficult for the Israel lobbies to implement 1) consistently. Biden has been close for his entire career to the positions of the American Israel Public Affairs Committee, a coordinating body for 16,000 smaller lobbies that throw millions into congressional races. He may not have another race to run, and for the lobbies to try to smear or punish him would surely backfire on them. It would also signal to younger politicians that it is dangerous to take their money because they are fickle and intolerant of the slightest dissent. I have argued that for many reasons, Israel is becoming more a Republican Party project than a Democratic one. Many in the GOP agree and hope this development will bring US Jews, who vote overwhelmingly Democratic, over to the Republicans. But another development is possible, which is that Jewish Democrats may become less supportive of an increasingly far rightwing Israel.

By overreaching, Netanyahu may be shattering the hammer his partisans in the US have used to destroy critics of his policies in America. And Mideast policy in the US may never be quite the same.