Surviving the Nazis, Only to Be Jailed by America

Today the U.S. government treats immigrants from Latin America the way liberated Jews were treated after World War II. Then a presidential aid reported: "we appear to be treating the Jews as the Nazis treated them except that we do not exterminate them. They are in concentration camps in large numbers under our military guard instead of S.S. troops." Our nation of immigrants treats modern immigrants with arrest and detention; and modern immigrant (concentration) camps. 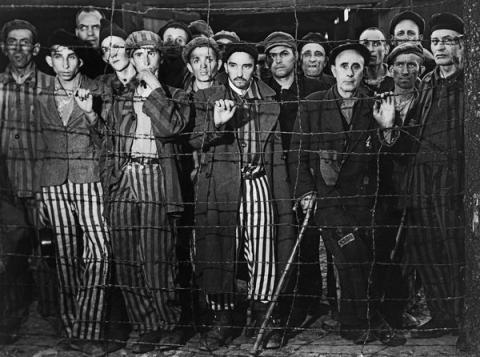 Prisoners at the Buchenwald concentration camp, near Weimar, Germany, as it was liberated by American forces in April 1945., Margaret Bourke-White/Time & Life Pictures - Getty Images // The New York Times

World leaders gathered at Auschwitz last month to mark the liberation 70 years earlier of the Nazis' most infamous concentration camp. More ceremonies will follow in coming months to remember the Allied forces' discovery, in rapid succession, of other Nazi concentration camps at places like Bergen-Belsen that winter and spring of 1945.

Largely lost to history, however, is the cruel reality of what "liberation" actually meant for hundreds of thousands of Holocaust survivors discovered barely alive in the Nazi camps.

Even after the victorious American and Allied forces took control of the camps, the survivors - mainly Jews, but also small numbers of gays, Roma, Communists, Jehovah's Witnesses and others - remained for months behind barbed wire and under armed guard in what became known euphemistically as displaced persons, or D.P., camps. Many Jews were left wearing the same notorious striped pajamas that the Nazis first gave them.

With the American forces overwhelmed by the sheer numbers of refugees under their control, underfed survivors lived for months in decrepit camps in Germany and Austria - a number of them on the same grounds as the concentration camps. Even after conditions improved, thousands of former prisoners remained inside and in limbo for as long as five years because the United States and most other nations refused to let them in.

In the early months after the war, thousands of survivors died from disease and malnutrition. Food was so scarce that rioting broke out at some camps, as Allied commanders refused to give extra food rations to Jewish survivors because they did not want to be seen as giving them preferential treatment over German P.O.W.s and other prisoners.

Faced with complaints by outside Jewish groups about conditions of "abject misery," President Harry S. Truman sent a former immigration official, Earl Harrison, to Europe to inspect the camps. His findings were blistering. The survivors "have been `liberated' more in a military sense than actually," Harrison wrote Truman in the summer of 1945.

"As matters now stand," he wrote, "we appear to be treating the Jews as the Nazis treated them except that we do not exterminate them. They are in concentration camps in large numbers under our military guard instead of S.S. troops."

I ran across Harrison's report a few years ago while researching a book on the flight of Nazis to the United States after the war. As I examined the path the Nazis took out of Europe, I struggled to understand how so many of them had made it to America so easily while so many Holocaust survivors were left behind.

One answer came in a copy of Gen. George S. Patton's handwritten journal. In one entry from 1945, Patton, who oversaw the D.P. operations for the United States, seethed after reading Harrison's findings, which he saw - quite accurately - as an attack on his own command.

"Harrison and his ilk believe that the Displaced Person is a human being, which he is not, and this applies particularly to the Jews who are lower than animals," Patton wrote. He complained of how the Jews in one camp, with "no sense of human relationships," would defecate on the floors and live in filth like lazy "locusts," and he told of taking his commander, Gen. Dwight D. Eisenhower, to tour a makeshift synagogue set up to commemorate the holy day of Yom Kippur.

"We entered the synagogue, which was packed with the greatest stinking mass of humanity I have ever seen," Patton wrote. "Of course, I have seen them since the beginning and marveled that beings alleged to be made in the form of God can look the way they do or act the way they act."

Other evidence emerged revealing not only Patton's disdain for the Jews in the camps, but an odd admiration for the Nazi prisoners of war under his watch.

Under Patton, Nazis prisoners were not only bunked at times with Jewish survivors, but were even allowed to hold positions of authority, despite orders from Eisenhower to "de-Nazify" the camps. "Listen," Patton told one of his officers of the Nazis, "if you need these men, keep them and don't worry about anything else."

Following Harrison's scathing report to Truman, conditions in the camps slowly became more livable, with schools, synagogues and markets sprouting up and fewer restrictions. But malaise set in, as survivors realized they had no place to go.

Hundreds of thousands of war refugees from Eastern Europe - including many top Nazi collaborators - gained entry to the United States in the first few years after the war, but visas were scarce for those left in the camps. Some Washington policy makers were actively opposed to the idea of taking in Holocaust survivors because of lingering anti-Semitism.

At Bergen-Belsen, as many as 12,000 Jewish survivors at a time remained there until the camp was closed in 1951. Menachem Z. Rosensaft was born at the camp in 1948 to two Holocaust survivors. He said in an interview that he believed that the survivors' hardships after the war had often been overlooked because "it doesn't neatly fit the story line that we won the war and liberated the camps."

Mr. Rosensaft, the editor of a new book by Holocaust descendants called "God, Faith and Identity from the Ashes," added: "Nobody wanted them. They became an inconvenience to the world."

Joe Sachs, an 88-year-old Holocaust survivor who now lives outside Miami, said his three and a half years in a displaced person camp were tolerable. He met his wife there, learned a trade as a dental technician, and, on most days at least, there was enough food for everyone to get a piece of bread or meat.

Compared with the Nazi camps, "it was heaven," he said. "But of course we felt abandoned," Mr. Sachs added. "We were treated not quite as human beings. In a camp like that with a few thousand people, the only thing you feel is abnormal."

The State Department finally approved visas for Mr. Sachs and his wife and their 18-month-old daughter in 1949, just as Holocaust survivors were finally being allowed into the country in large numbers, and they left for New York City.

That, he said, was truly liberating.

[Eric Lichtblau is a Washington correspondent for The New York Times and the author of "The Nazis Next Door: How America Became a Safe Haven for Hitler's Men."]