New Study--Lynching in America: Confronting the Legacy of Racial Terror

I don’t believe that we have confronted the legacy of our history in a meaningful way…Our interest is really in forcing the country to talk differently about this history,” -- Bryan Stevenson, executive director of the Equal Justice Initiative, 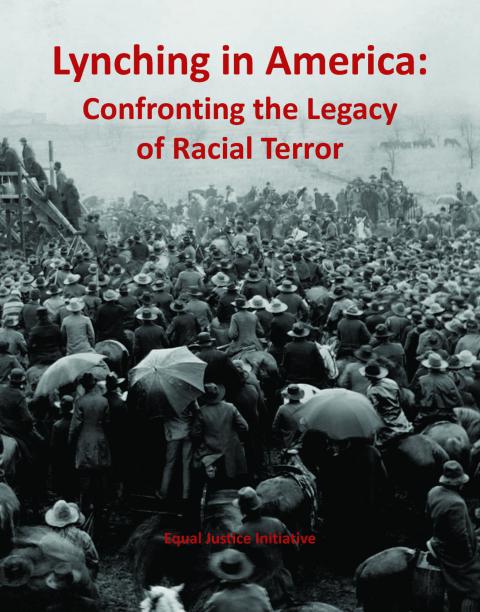 The number of African-Americans lynched in Southern states in the 19th and 20th centuries is significantly higher than previously detailed, according to a new report examining lynching in the United States.

The report is the latest in a series of attempts to document the true number of lynching victims in this country, an effort that dates back more than a century. While it is known that thousands of black Americans were lynched, the practice of “targeted racial violence” still has not been fully addressed, according to the report released Tuesday by the Equal Justice Initiative, a non-profit based in Alabama.

“Lynchings were violent and public acts of torture that traumatized black people throughout the country and were largely tolerated by state and federal officials,” the report’s summary states. “These lynchings were terrorism.”

Researchers said they determined that 3,959 black people were killed in “racial terror lynchings” in a dozen Southern states between 1877 and 1950. The new number includes 700 people who were not named in previous works seeking to comprehensively document the toll, the authors wrote. Some of those previous studies were conducted at a time when lynching was still an ongoing phenomenon.

“I don’t believe that we have confronted the legacy of our history in a meaningful way…Our interest is really in forcing the country to talk differently about this history,” Bryan Stevenson, executive director of the Equal Justice Initiative, said Tuesday.

This latest report, titled “Lynching in America: Confronting the Legacy of Racial Terror,” becomes part of a broader universe of studies and publications that have tried to quantify the scope of these brutal attacks during the decades after Reconstruction.

The authors of the new report point to research conducted by the Tuskegee University as well as the work of Stewart Tolnay and E.M. Beck, the sociologists who wrote “A Festival of Violence.” In their 1995 book, Tolnay and Beck also cited two other inventories, both of which were produced amid what they called “a frenzy of lynching” in Southern states between 1882 and 1930: The Chicago Tribune’s annual list of lynching victims, published in the late 19th century and early 20th century; and the NAACP’s 1919 report finding that 3,224 people were lynched from 1889 to 1918.

Tolnay and Beck sought to tie together these earlier resources as well as contemporaneous news accounts, writing in “A Festival of Violence” that they worked with these sources to try to come up with an updated record of victims. They determined that more than 2,400 black people were killed by lynch mobs in the South between 1882 and 1930.

As part of their work, Tolnay and Beck wrote that they tried to only include incidents that fit specific criteria (they used the NAACP’s definition, which required evidence that someone was illegally killed at the hands of three or more people) and were confirmed by a newspaper account. The latter requirement is open to criticism, the two authors wrote, because it is possible newspaper reports may not have documented every possible lynching.

But Tolnay and Beck said they doubted this occurred very often, because lynchings did not occur hidden away from the public. Rather, what actually happened was quite the opposite, as they wrote:

“To be an effective mechanism for social control, lynchings had to be visible, with the killing being publicly known, especially to the target population.”

The new report published this week looked at a period that was slightly longer than the one studied by Tolnay and Beck and similarly focused on the Southern states it found had the most lynchings in the country: Alabama, Arkansas, Florida, Georgia, Kentucky, Louisiana, Mississippi, North Carolina, South Carolina, Tennessee, Texas and Virginia.

(It is worth pausing here to note that while most discussions of lynching tend to focus on the South, it was by no means just a Southern phenomenon. A “significant” number of lynchings did occur outside this region, as Michael J. Pfeifer, a history professor at John Jay College of Criminal Justice, wrote in the introduction to the essay collection, “Lynching Beyond Dixie: American Mob Violence Outside the South.” And when the U.S. Senate apologized in 2005 for not passing anti-lynching laws long before, admitting that the legislative body had repeatedly failed to make lynching a federal offense, the bill noted that lynching had occurred in nearly every state.)

The authors of the new report outline a series of common threads that tied together the lynchings that occurred across states and over a period of several decades. It took little more than an allegation or a perceived insult to spark a lynching in some cases, they write, and the lynchings themselves drew large crowds. James Cameron, who survived being lynched as a teenager and later founded America’s Black Holocaust Museum in Milwaukee, said he remembered seeing 2,000 white people gathered at his lynching, some with their children.

Here is how the authors of the report describe the crowds in the report’s summary:

The lynchings we document were acts of terrorism because these murders were carried out with impunity, sometimes in broad daylight, often “on the courthouse lawn.” These lynchings were not “frontier justice,” because they generally took place in communities where there was a functioning criminal justice system that was deemed too good for African Americans. Terror lynchings were horrific acts of violence whose perpetrators were never held accountable. Indeed, some “public spectacle lynchings” were attended by the entire white community and conducted as celebratory acts of racial control and domination.

And this segment describing the spectacles seems to echo what Tolnay and Beck wrote two decades ago regarding how public these events were:

Large crowds of white people, often numbering in the thousands and including elected officials and prominent citizens, gathered to witness pre-planned, heinous killings that featured prolonged torture, mutilation, dismemberment, and/or burning of the victim. White press justified and promoted these carnival like events, with vendors selling food, printers producing postcards featuring photographs of the lynching and corpse, and the victim’s body parts collected as souvenirs

In addition, the study decries the lack of a public memorial or monument to the lynching victims while the region is cluttered with “markers and monuments” memorializing the Civil War and Confederacy.

Max Ehrenfreund contributed to this report.

Mark Berman is a reporter on the National staff. He runs Post Nation, a destination for breaking news and developing stories from around the country.