For years McDonald's new products, business ventures, even social media attempts have gone wrong. It has spectacularly failed to attract or even hold on to millennial customers, who’ve fled in droves. It’s the most visible target of an alliance of workers fighting for $15 an hour and its food is seen as anything but sustainable, fresh or healthy. A result has been a whopping 15 percent drop in its United States operating income in the last quarter of 2014. 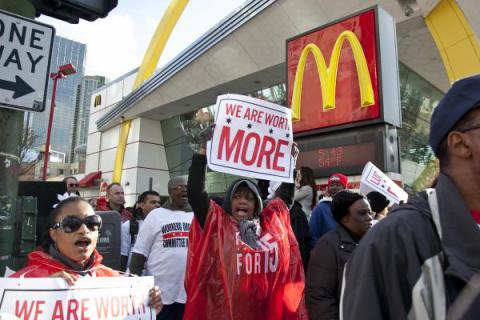 You could almost feel sorry for McDonald’s. That’s an odd sentiment when you consider that the company’s revenues in 2014 were $27.4 billion and its stock price makes it worth something like $92 billion. It’s among the world’s most valuable brands and has three times the United States market share of Subway, its nearest competitor.

Enviable. Yet for years its new products, business ventures, even social media attempts have gone wrong: It sold a 90 percent share in Chipotle,now one of its strongest competitors; it introduced products like chicken wings, which went nowhere; it created a Twitter hashtag, #McDStories, that turned into a bashing event. And it has spectacularly failed to attract or even hold on to millennial customers, who’ve fled in droves.

Meanwhile, it’s the most visible target of an alliance of workers fighting for $15 an hour (most McDonald’s workers make slightly more than the federal minimum wage, $7.25, but it varies by state), and its food is seen as anything but sustainable, fresh or healthy. A result has been a decline that includes a whopping 15 percent drop in its United States operating income in the last quarter of 2014.

The company is losing customers to higher-end burger chains like Shake Shack and Five Guys, to small but intriguing start-ups that makes locally sourced, slow food appealing, like Dig Inn, to Chick-fil-A (around $5 billion in sales in 2013) and, of course, to Chipotle, which has sales in the $4 billion range.

McDonald’s can’t get a break. In the last two months, the company has made several well-publicized big announcements that were widely greeted with yawns or jeers.

The first was a decision to phase out chickens raised using antibioticsmeant to treat humans. The second was to unilaterally raise the salaries of those minimum-wage workers the company directly employs by at least a dollar an hour, granting a small amount of paid vacation time to company employees and financial assistance for education to all workers in its system. And the third was to begin referring to itself as a “modern, progressive burger company.”

Is it too little, too late? Recall Polaroid trying to manage digital photography or BlackBerry struggling to recover after being devastated by the iPhone. Once again, an entrenched company has sat back while nimbler, more with-it others ate its lunch. Many of the new fast-food chains are paying workers better, sourcing sustainable ingredients, creating different forms of fast food and even making better burgers. Now McDonald’s is trying to play catch-up.

But it’s using half measures, and that’s the problem. It’s not like the competition is going to go away, and the brand may be permanently tarnished. Fixing that isn’t going to be easy, and it’s not even clear whether it’s possible.

What McDonald’s should do is go all in and really transform itself, because the effect of positive change would be immeasurable. Instead it tries to play it both ways, controlling what franchisees buy and sell but insisting that it cannot dictate how they treat employees. Thus the wage increase touches only around 11 percent of the chain’s workers, and workers immediately decried it as inadequate. (Even Walmart did better.) No one turns down a raise, but this one virtually guarantees that most of the company’s workers will remain eligible for food stamps, thus perpetuating the public subsidy for McDonald’s labor force.

That the nonantibiotic move has taken this long (Chipotle has tried to be antibiotic-free for more than a decade, as has Panera) and is so incomplete — that is, there’s no word about pork or beef, and the move is being phased in — also seems pathetic. (Even more pathetic is the refusal of the Food and Drug Administration to mandate the removal of nonmedicinal antibiotics from animal production, but that’s another story.)

These moves demonstrate that McDonald’s is hardly a “progressive” company but one that is merely trying in a halfhearted way to catch up with changing market norms and to anticipate inevitable regulation.

If McDonald’s were truly progressive, what would it do? It might revamp the menu in favor of sustainably sourced and fresher food (it’s worth noting that in Britain, McDonald’s uses free-range eggs and organic milk), and might increase its workers’ wages (and hours) to something approaching a living wage.

It may be that the biggest beneficiary of McDonald’s recent moves is the food movement, which, smelling blood, continues to apply pressure. (In response to the raise, some demonstrating workers chanted: “Hey McDonald’s, let’s be blunt/This is just a P.R. stunt.”) And that movement continues to gain credibility as it attends more to the rights of humans than those of animals — not that animals don’t matter, but it’s all relative.

It’s great that McDonald’s blinked. I’d love to see it become a truly progressive company — I’d even help them if I could — but if that’s not in the cards, it would be fine to see a continuing decline in its business. Either would be a satisfactory ending to the McDonald’s story.