However, skillful propagandist that Kennedy is, in her effort to whitewash history and try to ferret out something positive in a colossal debacle, there’s something even she can’t hide. Look closely at the newsreel clips as the NVA tanks roll into what was renamed Ho Chi Minh City. Not only are the soldiers jubilant, but look at the smiling faces of the Vietnamese masses as they are being liberated from decades of Japanese, French and Yankee occupation and imperialism. 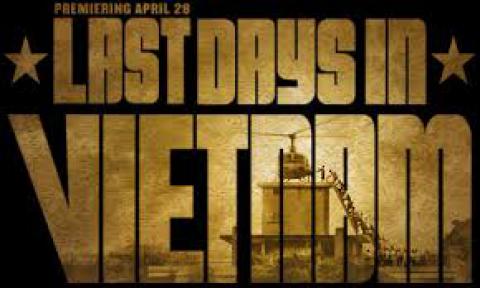 As U.S. foreign policy in Iraq faces its biggest defeat since the Indochina Wars the niece of President Kennedy — who escalated the number of U.S. advisors in Vietnam from 600 to 16,000 — directed the cinematic equivalent of putting a blossom on a turd. Rory Kennedy fired the opening salvo in the propaganda war regarding a historic Indochina landmark with Last Days in Vietnam, which was theatrically released last September and nominated for the Best Documentary Oscar (losing, thankfully, to Laura Poitras’ Citizenfour).

PBS aired Last Day in Viet Nam on April 28th and it can be viewed currently on the PBS website. This film is so shamefully, wildly one-sided that this historian/reviewer hesitates to call it a “documentary” — rather, Last is a piece of propaganda in the very worst sense of the term. Indeed, this egregiously biased, one-sided work is arguably more of a mock-umentary — but unlike This is Spinal Tap Kennedy’s Orwellian disinformation is no laughing matter.

As the 40th anniversary of the end of the Vietnam War and reunification of the nation approaches April 30, Last desperately tries to find something positive to say about the role the American military and diplomats played as the “Yankees go home” scenario unfolded and the communists took over what was then Saigon. According to the film, some soldiers and State Department officials took great pains — and sometimes at grave personal risk to themselves — to evacuate thousands of the Vietnamese, including military, who had worked for and married U.S. personnel, as well as the up to 5,000-7,000 Yanks still “in country.”

Like Ronald Reagan before them, Kennedy and her partners-in-crime, including co-writer/husband Mark Bailey, have taken great pains to try and find something glorious and heroic in the greatest defeat for U.S. imperialism in the entire history of the American empire. In their disgraceful effort to make a stinking garlic smell like a rose, the filmmakers willfully expunge history and any sort of context from their one dimensional exercise in disinformation. For example: The film alleges that during 1968’s Tết Offensive the communists executed thousands of South Vietnamese at Huế. However, the countless war crimes committed by Washington are never, never once mentioned in this execrable piece of agitprop.

Hey Ms. Kennedy, ever hear of the Mỹ Lai Massacre? How about the 1972 bombing of Hanoi — during CHRISTMAS? Or the mining of Haiphong Harbor??? Of course, the list of American atrocities committed against the Indochinese — starting with intervention in the domestic affairs of nations that never attacked the U.S.A. — is endless, the millions murdered by carpet bombing, landmines, agent orange, napalm, etc., is innumerable, and it would require an entire series of documentaries to record them all. But Kennedy never mentions any of them — although she goes out of her way to vilify the Reds (don’t forget that her father, Bobby Kennedy, served on anti-communist Sen. Joseph McCarthy’s witch-hunting Senate Permanent Subcommittee on Investigations).

Last simplistically endeavors to depict the Vietnam War (which, by the way, the Vietnamese call “the American War”) as a conflict between the north and the south, with Washington backing the latter. Kennedy conveniently commits the heinous crime of omission by never — not even once! — ever mentioning the National Liberation Front, the resistance fighters in the south. According to the Pentagon Papers, 300,000 people belonged to the NLF (aka Viet Cong) by 1962 (you know, when Ms. Kennedy’s uncle was president). MILLIONS of people in the south must have supported the NLF in order for the Tết Offensive to have been carried out in 1968, let alone for the south to have been liberated seven years later, beating both the American imperialists and the army it supplied and funded. Last mentions that the ARVN “eroded” in 1975, but never ponders why the North Vietnamese Army and the Viet Cong didn’t and remained highly motivated.

Last’s sources include former Secretary of State Henry Kissinger, who appears in news clips and presumably in contemporary, original interviews, where this mass murderer of millions in Indochina, Chile, Timor, etc., is once again given the softball “elder statesman” treatment. Richard Armitage — no, not the Hobbit actor but the Navy and U.S. government operative who apparently never met a covert action he didn’t like — is likewise given the hero treatment. But Armitage’s willingness to break the law — purportedly to save south Vietnamese lives — is never put in the context of his alleged involvement with Ted Shackley, the CIA chief in south Vietnam, and the heroin trade, as well as Armitage’s dubious role in the Iran-Contra Scandal are never mentioned. The film also conducts original interviews with former ARVN officers.

After a LA Film Festival screening an audience member asked Kennedy and crew members why nobody from the Northern and NLF side were interviewed for the film and she replied, “We considered this but ultimately their part of the story was about the war. We wanted to focus on the heroes,” that is, those Americans who put themselves in peril to rescue south Vietnamese lives, in order to tell what Kennedy blithely called “a human story.”

Author Stuart Herrington, who served in military intelligence and then the Defense Attaché Organization in south Vietnam and is a source in the film as he was an eyewitness to the events of April 1975, joined Rory for the post-screening Q&A. Herrington said that the communist side “did not add to the film” and that they would have merely indulged in “chest thumping” had they been interviewed. SORE LOSER! As if Yanks never take part in “American triumphalism” screaming “USA! USA!” and the like, especially when it invades — unprovoked — smaller, weaker nations.

But here’s the real reason why this agitprop pic never makes any effort to show the other side of the story: NVA and NLF supporters would presumably contend that the southerners the Yankees tried to save at the last minute were collaborators and running dogs of U.S. imperialism, who supported a Washington-backed puppet regime. And that it was the Viet Cong who were the south’s real patriots. But don’t worry: The former president’s niece, charter member of the ruling class, has taken great care to make sure that American ears aren’t offended by hearing the other side of this “human story.” The Vietnamese Left doesn’t just not get equal time — it gets no air time in this blatantly biased propaganda flick, because Kennedy’s subjects and POV couldn’t withstand scrutiny. Thus Last is willfully violating journalistic ethics to present all viewpoints, without fear or favor.

However,  skillful propagandist that Kennedy is, in her effort to whitewash history and to try to ferret out something positive in a colossal debacle so she can pander to U.S. rightwing sentiment, there’s something even she can’t hide. Look closely at the newsreel clips as the NVA tanks roll into what was renamed Ho Chi Minh City. Not only are the soldiers jubilant, but look at the smiling faces of the Vietnamese masses as they are being liberated from decades of Japanese, French and Yankee occupation and imperialism. Perhaps we should thank Ms. Kennedy for not using CGI to turn those smiles into frowns.

To be fair Ms. Kennedy has produced and/or helmed some good documentaries in the past, including 2005’s Street Fight, 2006’sThe Homestead Strike and 2007’s Ghost of Abu Ghraib. The jury is still out as to what JFK would have done in Vietnam had he had a second term in office. Some, like Oliver Stone, believe he planned to pull out of Vietnam (which Stone and others believe is a major reason why he was liquidated). And Rory’s father, Bobby Kennedy, did run as a peace candidate in 1968, although again, bullets cut short his life and who knows how a possible Bobby presidency might have ended the war, instead of Tricky Dick’s ascension to the presidency in 1968?

And Last does point out that the U.S. Ambassador to south Vietnam, the Nixon-appointed Graham Martin, was in denial of reality up to the very last minute (if not, like the pig who appointed him, unhinged), resulting in chaotic, last minute evacuation plans. More than 400 of those Vietnamese camping out at the U.S. embassy grounds in what had been Saigon never made it to those choppers or boats to escape their fates.

Having said this, with liberals like Rory Kennedy, who needs reactionaries? Last Days in Vietnam will air on PBS’ (your tax dollars at work!) American Experience just in time to brainwash Americans as the 40th anniversary of U.S. imperialism’s greatest defeat nears, and as another catastrophe for Washington’s foreign policy unfolds in the Middle East and beyond. But the real lesson to draw from the Vietnam War is not that at the very end, perhaps a handful of Yanks put themselves in harm’s way. (Which is a bit like arsonists patting themselves for rescuing a few folks from the house they’ve set afire.)

Rather, the true moral of the story is that being the world’s policeman is a disastrous policy that costs Americans and the nations they willy-nilly invade dearly, in blood and treasure. U.S. military and intelligence are arguably the most destabilizing forces on Earth, with bases straddling the globe and eternally intervening in others’ internal affairs. Nobody likes busybodies and meddlers: If you go around the world sticking your nose into other people’s business you’re likely to get punched in the schnoz. Washington’s empire is bankrupting a country that can’t even take care of those hapless soldiers who politicians and corporations blithely send into harm’s way for foreign misadventures — should they eventually make it back home outside of body bags. No amount of flag waving can hide the truth, that when it comes to militarism, Washington should mind its own business — as if America doesn’t have enough pressing problems back home.

As the Obama regime escalates the U.S. involvement in Iraq, documentaries like this are the last thing viewers need to see. Rory Kennedy’s despicable, reprehensible propaganda flick might be called Last Days in Vietnam, but the liberation and reunification were certainly not the last days of Vietnam. The Vietnamese won the war and they are winning the peace, proving that the last shall be first.As PBS uses taxpayer money, if Last is broadcast without an antiwar film near its time slot, this may very well be a violation of laws prohibiting the government from using public funds to favor one side in an issue through preferential treatment. It may also be violating U.S. prohibitions against government support for propaganda – and those responsible should be investigated and held accountable for any possible lawbreaking.

Last Days in Viet Nam can be viewed on PBS.org.

[Ed Rampell is a Film historian and reviewer.  His interview with legendary Greek director Costa-Gavras appeared in The Progressive Magazine. Rampell is the co-author of The Hawaii Movie and Television Book.