After Lobbying by Obama, Senate Agrees to Vote on Trade Bill After All; Why Elizabeth Warren is Fighting the TPP

The Trans Pacific Partnership (TPP) - what's at stake? Why the secrecy, why the rush, why cut-off debate and input? The reason is - Money, big money, says the New York Times. Major American business interests, from Nike to Boeing and Hollywood to Silicon Valley, want the deal badly. Labor and environmental groups see it as a threat to American workers at the expense of profits.

May 14, 2015 Jonathan Weisman; Bud Meyers
Printer friendly
After Lobbying by Obama, Senate Agrees to Vote on Trade Bill After All; Why Elizabeth Warren is Fighting the TPP Published May 14, 2015 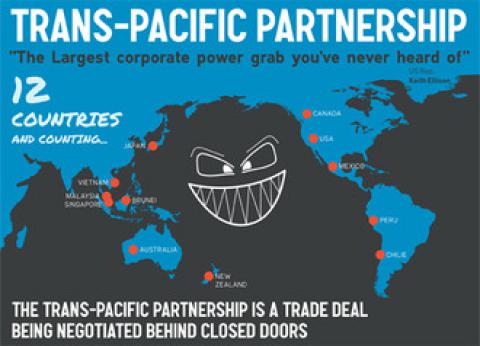 After Lobbying by Obama, Senate Agrees to Vote on Trade Bill After All

Senate leaders, after personal intercessions by President Obama, reached an agreement Wednesday on a path to grant the president accelerated power to complete a sweeping trade accord ringing the Pacific Ocean - just a day after fellow Democrats had blocked him.

The larger aim is to secure a 12-nation agreement known as the Trans-Pacific Partnership, spanning the Pacific from Canada and Chile to Japan and Australia and encompassing 40 percent of the world's economic output. Mr. Obama sees the pact as a central part of his economic legacy, the largest trade deal in two decades and the realization of his foreign policy pivot toward Asia.

It also means money. Major American business interests, from Nike to Boeing and Hollywood to Silicon Valley, want the deal badly. Labor and environmental groups see it as a threat to American workers at the expense of profits.

A series of trade-related votes will begin Thursday and stretch well into next week. The trade promotion authority would give the president the ability to move more quickly on the deal, leaving Congress with the power to vote up or down on the agreement but with no ability to amend it.

While the pathway to passage became clearer Wednesday, it is still treacherous. Most Senate Democrats will ultimately oppose the trade promotion bill, and with the stated opposition of Senators Rand Paul of Kentucky and Jeff Sessions of Alabama, both Republicans, there are now louder rumblings on the president's right flank.

"Now is not the time to celebrate," said Senator Orrin Hatch of Utah, the Finance Committee chairman. "While this agreement solves a temporary procedural issue, now is when the real work begins."

Yet Mr. Obama showed he does have sway among fractious Democrats. A long White House meeting with 10 Democrats considered pro trade helped force the Senate to compromise. In the end, the Democrats withdrew their demand that trade enforcement measures be integrated into trade promotion authority before the Senate began considering the measure.

"The so-called pro trade Democrats had a chat with the president for a couple of hours, and I think that helped," said Senator John Cornyn of Texas, the Senate's No. 2 Republican. "I wish he'd had that chat with them before the first failed vote."

Under the deal, the Senate will vote Thursday, first on a contentious trade enforcement bill that includes new remedies to counter currency manipulation by trading partners, and then on an extension of an African trade agreement.

The Senate would then begin debate Thursday evening on trade promotion authority.

The agreement gives Democrats a chance to demonstrate broad, bipartisan support for a get-tough approach on countries that intentionally keep the value of their currency low to make their exports cheaper, which then effectively raises the cost of American-made goods. But if that separate bill can get through the House, it would then be vetoed by the president, who believes it would destroy the trade talks.

For the most ardent opponents of Mr. Obama's trade push, the deal means delay, which can be perilous for trade negotiators. Under the terms of the trade promotion legislation, Congress could not consider a final Pacific trade deal for four months after it was completed, pushing it further into the election season, when major legislative initiatives become far more difficult. Final negotiations would not begin unless and until Congress approved the accelerated authority.

Republicans succeeded in fending off a Democratic push to attach the currency measure to trade promotion authority itself. The measure has the support of a strong majority in the Senate, including Senator Rob Portman, Republican of Ohio and a United States trade representative in the administration of President George W. Bush. American automakers and some economists believe a currency measure is vital to a trade agreement that is intended to protect the interests of American workers.

Mr. Portman went to the Senate floor Wednesday evening and promised that he would push for a currency provision on the trade promotion bill itself. "Part of a level playing field is making sure countries don't manipulate their currency," he said.

But the White House fears that making the accelerated authority contingent on currency policy alterations could scare important partners from the negotiating table, including Japan, the second-largest Trans-Pacific partner.

Senator Mitch McConnell, the majority leader, insisted on a legislative approach that would "provide our Democratic colleagues with a sensible way forward without killing the bill," he said as he presented the plan on the Senate floor.

For his part, Mr. Obama preserved a clean path toward the Pacific trade deal, which includes Australia, Brunei, Canada, Chile, Japan, Malaysia, Mexico, New Zealand, Peru, Singapore and Vietnam, as well as the United States. "Yesterday, we made it clear we didn't accept merely a fast-track foreign trade agreements," said Senator Harry Reid of Nevada, the Democratic leader. "We must also enforce the trade agreements we make. The proposal today provides that path forward."

Mr. Obama had rankled Mr. Reid and some other Democrats by singling out members of their party by name, criticizing them for their opposition to the deal. The president was notably critical of Senator Elizabeth Warren, Democrat of Massachusetts, whom he called "absolutely wrong" for her views.

For all the drama, Senate Democrats may have ended up where they started, with tough trade enforcement provisions that are broadly supported but without a vehicle to get them into law. Lawmakers from both parties say that even if the enforcement and currency bill passes Thursday, they may try to break off some provisions as amendments to the trade promotion bill that Mr. Obama must sign into law.

Those measures include the creation of an interagency trade enforcement center and a system to respond faster to unfair trade practices. Another would require Customs and Border Protection to quickly investigate allegations of customs duty evasion.


Elizabeth Warren at the Roosevelt Institute (TPP and More)

Elizabeth Warren and Rosa DeLauro recently co-authored an article posted at the Boston Globe (titled Who is writing the TPP?) which says, "Hillary Clinton has said that the United States should be advocating a level and fair playing field, not special favors for big business, in our trade deals. We agree with this blunt assessment."

Some people might find it odd that Elizabeth Warren (or was it Rosa DeLauro?) would quote Hillary Clinton, who was really only quoting Elizabeth Warren. But overall, it's a great article, and it also goes on to say that "28 trade advisory committees have been intimately involved in the [TPP] negotiations. Of the 566 committee members, 480, or 85 percent, are senior corporate executives or representatives from industry lobbying groups. Many of the advisory committees are made up entirely of industry representatives."

This is true, and you can see who they are in a link further below in this post. But here is where the main gripe is, that both left-wing progressives and right-wing Tea Partiers can fully agree on, when the article goes on to say:

A rigged process leads to a rigged outcome. For evidence of that tilt, look at a key TPP provision: Investor-State Dispute Settlement [ISDS] where big companies get the right to challenge laws they don't like in front of industry-friendly arbitration panels that sit outside of any court system. Those panels can force taxpayers to write huge checks to big corporations - with no appeals. Workers, environmentalists, and human rights advocates don't get that special right.

Most Americans don't think of the minimum wage or antismoking regulations as trade barriers. But a foreign corporation has used ISDS to sue Egypt because Egypt raised its minimum wage. Phillip Morris has gone after Australia and Uruguay to stop them from implementing rules to cut smoking rates. Under the TPP, companies could use ISDS to challenge these kinds of government policy decisions - including food safety rules.

The president dismisses these concerns, but some of the nation's top experts in law and economics are pushing to drop ISDS provisions from future trade agreements. Economist Joe Stiglitz, Harvard Law professor Laurence Tribe, and others recently noted that "the threat and expense of ISDS proceedings have forced nations to abandon important public policies" and that "laws and regulations enacted by democratically elected officials are put at risk in a process insulated from democratic input." That was exactly what Germany did in 2011 when it cut back on environmental protections after an ISDS lawsuit.

Elizabeth Warren and Rosa DeLauro could have also mentioned Coke in their article. When the government of Australia's Northern Territory considered creating a 10-cent refund on recycling plastic bottles, Coca-Cola poured millions of dollars into a misleading campaign to oppose the plan. But after the people Down Under had decided, the plan had passed --- but then Coke sued the government to stop the program. Coca-Cola runs similar campaigns all over the world. Of course, this is only one of many other examples.

In other words, President Obama and others who are pushing hard for the TPP trade agreement are really advocating to forfeit our national sovereignty to a group of "multi-national" corporations. 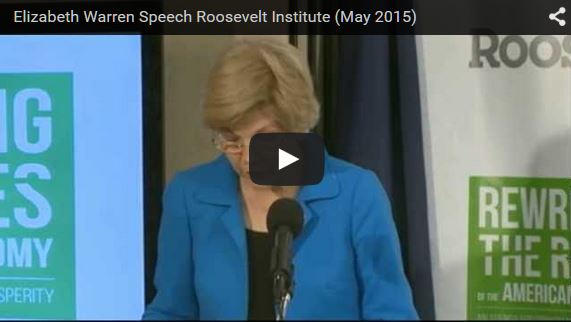 An organization of business lobbyists and huge corporations (that Warren had alluded to in her article) called "Trade Benefits America" has recently been plastering the airwaves with ads on TV promoting the TPP trade agreement. This is what the Supreme Court meant when they said corporations are people with free speech - because these "multi-national" corporations also have the most money to dominate the airwaves with the biggest megaphones and bombard us with the most political ads, while overriding everyone else's opinions on these matters and drowning out the "free speech" of much smaller and lesser organized voices.

And the corporate media running these ads are complicit, because just 6 corporations control 90% of the media in America. Recently it was announced that Verizon is going to buy out AOL (who also owns the Huffington Post) for $4.4 billion in cash - rather than give Verizon workers a raise.

Just as Senator Warren and many others have been pointing out over the last several years, the majority of U.S. corporate profits haven't trickling down to the U.S. working-class (meaning 90% of all American workers) since 1980 - because most of the gains have been sucked up to the wealthiest 0.01% (those that control the media, the multi-national corporations, the politicians and the U.S. Supreme Court). Now Obama is promoting "more of the same" with this TPP trade agreement.