A new report “Say Her Name: Resisting Police Brutality Against Black Women” by the African American Policy Forum (co-authored by Kimberlé Williams Crenshaw and Andrea J. Ritchie) offers the stories of girls and women—both cis- and transgender—whose names are not as well known in the mainstream and argues that fewer numbers is no excuse for erasure. 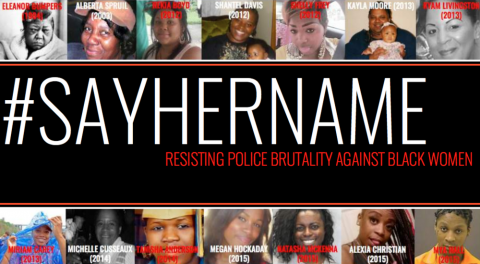 A new front in #BlackLivesMatter organizing is advancing today as concerned people nationwide gather to draw attention to black women and girls harmed or killed by police violence. According to organizers with Black Youth Project 100, rallies and vigils in more than 20 cities—including Baltimore, Chicago, Miami, and Los Angeles—will demand that onlookers, the media, and the public at large #SayHerName. Participants argue that a truly inclusive movement challenging police misconduct and state violence would make sure the names Tanisha Anderson, Michelle Cusseax, and Tarika Wilson—all black women killed by police—are remembered and used as motivating rallying cries alongside the names of their male counterparts.

Black boys and men are victimized by police violence more often than the girls and women in their communities. But a report out this week that offers the stories of girls and women—both cis- and transgender—whose names are not as well known in the mainstream argues that fewer numbers is no excuse for erasure. According to “Say Her Name: Resisting Police Brutality Against Black Women”: “The erasure of Black women is not purely a matter of missing facts. Even where women and girls are present in the data, narratives framing police profiling and lethal force as exclusively male experiences lead researchers, the media and advocates to exclude them.” Disproportionate police contact puts black women at risk for violence, and the researchers point out that in New York City—a site of ongoing organizing against stop and frisk policies—black men and women make up the lion’s share of those targeted. In 2013, black men made up 55.7 percent of all men stopped by NYPD, while black women made up 53.4 percent of all women stopped. Yet stop-and-frisk and “driving while black” are consistently framed as male problems.

In an effort to explain why it’s so easy for black women to go missing from the narrative,Tamara Winfrey Harris explained the historical roots of the problem earlier this month: “Black women were believed unbreakable long before Kimmy Schmidt came along. Our assumed lack of fragility made our enslavement, overwork, torture and sexual exploitation conscionable in an era when ‘real’ (read: white, middle-class) women were thought in need of white men’s protection.”

The “Say Her Name” report indicates that many of these same perceptions are at work today among law enforcement. For example, no period of time confers on women a kind of protected status more than pregnancy and motherhood, but the report highlights the cases of half a dozen pregnant women and women with children present who were killed or subjected to excessive force by police. There’s Rosan Miller, the Brooklyn woman who, at 7 months pregnant, was put into what appeared to be a prohibited chokehold by NYPD after an officer approached her for grilling on a public sidewalk. There’s also the case of Danette Daniels, a 31-year-old pregnant woman who was fatally shot in the head by a Newark, New Jersey, police officer in 1997. The officer was later cleared of criminal charges. To be fair,hundreds of people marched to protest the shooting at the time. But Daniels’s name is rarely if ever heard among those of others brutalized or killed by police during that same time period, such as Anthony Baez, Abner Louima, and Amadou Diallo.

Recent events in Baltimore have also drawn attention to incidents of pregnant black women’s abuse at the hands of police. Last year’s Baltimore Sun investigation, “Undue Force,” about more than 100 city residents who won judgments or settlements related to police brutality, highlighted the case of Starr Brown. Brown, who in 2009 witnessed a fight in her neighborhood, was detained by police after she encouraged them to pursue the fleeing attackers. According to the Sun, when an officer lunged at her, “She said she screamed that she was pregnant, but Galletti responded, ‘[We] hear it all the time.’… ‘They slammed me down on my face,’ Brown added, her voice cracking. ‘The skin was gone on my face.… I was tossed like a rag doll. He had his knee on my back and neck. She [the other officer] had her knee on my back trying to put handcuffs on me.’” Brown eventually delivered a healthy baby and was acquitted of all charges, including obstruction, disorderly conduct, and resisting arrest. She won a settlement from the city of $125,000.

Pregnancy is no shield against police violence, and neither is motherhood or childhood, according to the “Say Her Name” report. It tells the story of Tarika Wilson, a 26-year-old Ohio resident killed by police when they raided her house in search of her boyfriend, who was allegedly involved in the drug trade. In the process, they killed Wilson, who wasn’t a suspect, and injured her 14-month-old son. Aiyana Stanley-Jones, a 7-year-old girl in Detroit, was killed under similar circumstances in 2010. The officer who fatally shot her during a raid on her grandmother’s home has been cleared of all charges.

Miriam Carey. Meagan Hockaday. Sonji Taylor. Denise Stewart. These are the names of other women who, like Tarika Wilson, were killed or abused by law enforcement in the presence of their children. For those who concern themselves with reproductive health, rights, and justice, it’s especially important to learn their stories and say their names.

Dani McClain is a fellow at the Nation Institute. Her writing and reporting on gender, sexuality and reproductive health has been published in outlets including The Nation, The New York Times "Room for Debate," Al Jazeera America, Colorlines and EBONY.com. She lives in Oakland, California. Follow her @drmcclain.