The case, filed in 2002, was the first broad legal challenge to the policies and practices that swept hundreds of mostly Muslim men into detention on immigration violations in the weeks after the Sept. 11 attacks. The defendants include John Ashcroft, the former attorney general, and Robert S. Mueller III, the former F.B.I. director. Orders came from officials at the highest levels of government. Now we have the chance to ensure that they are held accountable. 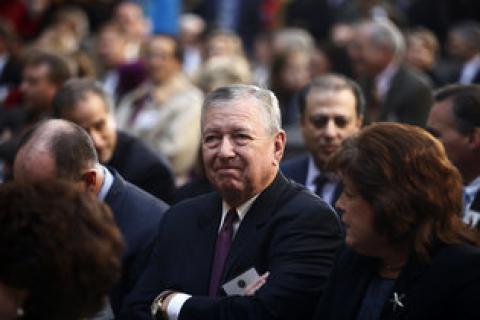 John Ashcroft, former United States attorney general - to be deposed. He is the defendant in a lawsuit over the detention of immigrants after 9/11. , Credit Charles Dharapak/Associated Press // New York Times

Saying that high-ranking Bush administration officials may have taken part in grave constitutional violations after the Sept. 11 attacks, a federal appeals court in New York on Wednesday revived a long-running lawsuit brought by immigrants, most of them Muslim, who said they were subjected to beatings, humiliating searches and other abuses in a Brooklyn detention center.

"The suffering endured by those who were imprisoned merely because they were caught up in the hysteria of the days immediately following 9/11 is not without a remedy," Judges Rosemary S. Pooler and Richard C. Wesley wrote in a joint opinion for a divided three-judge panel of the court, the United States Court of Appeals for the Second Circuit.

"Holding individuals in solitary confinement 23 hours a day with regular strip-searches because their perceived faith or race placed them in the group targeted for recruitment by Al Qaeda violated the detainees' constitutional rights," the judges said.

The case, filed as a class action in 2002, was the first broad legal challenge to the policies and practices that swept hundreds of mostly Muslim men into the Metropolitan Detention Center in Brooklyn on immigration violations in the weeks after the Sept. 11 attacks.

A lawyer for the plaintiffs said the ruling sent a powerful message.

"Punishing low-level perpetrators is necessary but hardly sufficient to prevent future abuse," said Rachel Meeropol, a lawyer with the Center for Constitutional Rights. "Orders came from officials at the highest levels of government. Now we have the chance to ensure that they are held accountable and not treated as if they are above the law."

"We are reviewing the court's decision," said Nicole A. Navas, a spokeswoman for the Justice Department.

The roundups after Sept. 11 drew criticism from the inspector general of the Justice Department, who in 2003 issued reports saying that the government had made little or no effort to distinguish between genuine suspects and Muslim immigrants with minor visa violations. The reports also documented widespread abuse at the Brooklyn detention center.

The eight named plaintiffs in the case, Turkmen v. Ashcroft, said they had been humiliated, beaten, and denied sleep and edible food or religious materials. Their detentions lasted three to eight months.

In 2009, in a related case called Ashcroft v. Iqbal, the Supreme Court ruled that another detainee, Javaid Iqbal, could not sue Mr. Ashcroft and Mr. Mueller because he had not supplied enough detail about what they were said to have done wrong. The decision on Wednesday said the plaintiffs had cleared that hurdle.

In dissent, Judge Reena Raggi said the majority had erred in allowing a lawsuit against "the nation's two highest-ranking law enforcement officials" for "policies propounded to safeguard the nation in the immediate aftermath of the infamous Al Qaeda terrorist attacks."

"It is difficult to imagine," she wrote, "a public good more demanding of decisiveness or more tolerant of reasonable, even if mistaken, judgments than the protection of this nation and its people from further terrorist attacks."

In their joint opinion, Judges Pooler and Wesley said that the evidence in the case coul