The flag may be wiped from state grounds and license plates, but its ideals live on in the GOP agenda 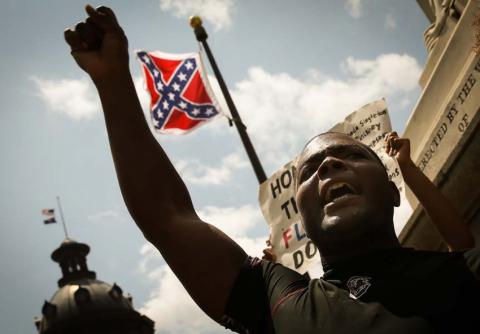 Jalaluddin Abdul Hamid shouts, ‘Take it down!’ in response to a pro-Confederate-flag demonstration outside the South Carolina State House on June 27. , Lexey Swall / Getty Images

It is an irony that the symbol of the old Confederacy has become the most prominent victim of the June 17 massacre in Charleston, S.C., rather than the three men and six women who were slaughtered at church.

After photos surfaced of the shooter posing with the flag, a bipartisan chorus of politicians, including at least a dozen Southern Republicans, denounced the flag's display on state grounds and license plates.

Though the Stars and Bars served as the battle flag for the Confederate Army, it only became a totem of the South in opposition to the integrationist push of the 1950s and 1960s, when it was adopted by the Dixiecrats—Southern Democrats repelled by their party's embrace of civil rights.

Those disgruntled white Democrats were aggressively recruited by the GOP through Nixon's Southern Strategy, which was exceedingly successful in transforming the Dixiecrat South into Republican central. Alienated Republican Michael Lofgen, a former staff member of the House and Senate Budget Committee, told MSNBC's Chris Hayes in 2013 that the GOP has become, in the past few decades, “an insurrectionist, neo-Confederate party.” Or, as Paul Krugman put it in a June 22 column, “Race made Reaganism possible.”

Some see the Tea Party as the latest manifestation of the GOP's neo-Confederate march. Law professor Ian Haney Lopez, author of Dog Whistle Politics: How Coded Racial Appeals Have Reinvented Racism and Wrecked the Middle Class, argues that the Tea Party's appeal has much to do with its coded racist messaging. The modern Republican Party—with its voter suppression schemes, states’ rights fetish, and steep cuts to government jobs and services that most benefit black communities—has absorbed the Confederate message. Its platform is in line with the principles espoused by neo-Confederate white separatist groups like the Council of Conservative Citizens, which donated $25,000 to GOP candidates in the last election cycle.

There is little doubt that the ascension of the first black president has contributed to this neo-Confederate boomlet. Obama's election exacerbated anxiety among America's white majority about the demographic changes that will, according to the U.S. Census, render it a minority in the next three decades. According to a 2014 Bloomberg poll, most Americans believe black-white “race relations” have worsened since Obama's election. In its official statement responding to the massacre at Charleston's Emanuel African Methodist Episcopal Church, the Southern Poverty Law Center (SPLC) noted that racist hate groups are on the rise. The Charleston shooting was “an obvious hate crime by someone who feels threatened by our country’s changing demographics and the increasing prominence of African Americans in public life,” said SPLC President Richard Cohen. The most prominent example is the presence of a black man in the White House.

Perhaps the savagery of a rampage in a sacred sanctuary will hasten some racist white Republicans to reappraise their views. The victims' families' expressions of Christian forgiveness won many whites' admiration; yet those conciliatory attitudes disquieted many black activists, a growing number of whom are increasingly militant—frustrated with the seeming acceleration of police abuse and the concomitant lack of racial progress on other fronts.

Indeed, it seems Republicans' sympathy for African Americans goes only so far. The GOP's neo-Confederate agenda is almost diametrically opposed to the interests of the black electorate. A glance at the platforms of the cavalcade of presidential candidates now lining up for the Republican primaries reveals a solid consensus behind the neo-Confederate agenda and little support for measures that strike at the heart of structural racism, like expanding voting access, creating more federal jobs and reforming criminal justice.

In light of the GOP's Southern dominance, the once-revered Confederate battle flag has served its purpose. The GOP elephant is the only totem now relevant. The flag is dispensable; the agenda isn’t.