Bernie Sanders is campaigning on behalf of the 99 percent against the 1 percent. And, he is getting lots of supports, drawing thousands to his campaign rallies. Sanders is not running an explicit socialist campaign for public or worker ownership of major firms. Sanders's socialist values underpin his argument that the economy should serve the needs of the people and be governed not by corporate oligarchs, but by democratic means. 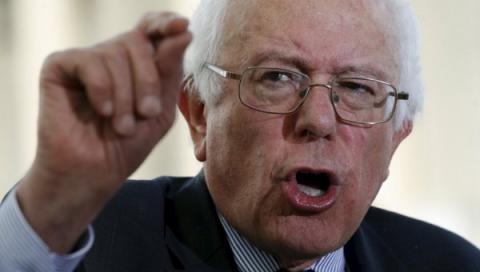 The Latin American left has had some success during the past decade limiting the ravages of neoliberal capitalism. In contrast, European social democracy and its distant cousin, United States liberalism, have mostly adopted a "third way" that has cut back on labor rights, deregulated finance, and curtailed public provision.  The austerity politics of both the right and the moderate left have forced ordinary people to bear the costs of the global economic crisis rather than the irresponsible corporate elites who caused it. But grassroots resistance to austerity has spread, beginning with the Spanish indignados and the Occupy movement in the United States.  Podemos in Spain and Syriza in Greece are electoral expressions of this new left. And now in the United States, the most anti-socialist of capitalist societies, an explicit democratic socialist, Senator Bernie Sanders (a political independent from the small rural state of Vermont)  has emerged as the major challenger to former Secretary of State Hillary Clinton for the 2016 Democratic presidential nomination.

Sanders is not running an explicit socialist campaign for public or worker ownership of major firms. Rather, he is campaigning on behalf of the 99 percent against the one percent; his platform calls for the strengthening of union power and labor rights; a massive public jobs program to rebuild U.S. infrastructure; truly universal health care ("Medicare for All") and  publicly-funded child care and free higher education. These social programs would be funded by forcing the rich and corporations to pay their fair share in taxes.  Sanders has focused laser-like attention on unbridled corporate power as the reason why the United States is the most inegalitarian of advanced capitalist societies.

When the media asks Sanders about his democratic socialist identity, he invariably refers to Scandinavian social democracy as his model.  When ABC News chief news anchor George Stephanopoulos recently chided Sanders for wanting to turn the United States into Scandinavia, Sanders spiritedly retorted on national television that Scandinavian child poverty rates are one-third those of the United States and social mobility for working class and poor children is considerably higher.

Sanders's socialist values underpin his argument that the economy should serve the needs of the people and be governed not by corporate oligarchs, but by democratic means.

In a country where polls say that only 31 percent of adults have a favorable view of socialism, how can Sanders draw crowds in the thousands in the small towns of Iowa and New Hampshire and be within striking distance of Hillary Clinton in early polls in both these states?  Perhaps because the public increasingly realizes that 90 percent of the income gains from the past five years of economic recovery have gone to the top one percent of income earners.  In a recent Pew Research Center poll, 77 percent of respondents (including 53 percent of Republicans) agreed "that there is too much power in the hands of a few rich people and corporations."  Individuals who came to political consciousness after the Cold War are  less hostile to socialism than are older generations that associate the term with authoritarian Communist regimes. In another poll taken in fall 2011, 49 percent of 18-29 year olds in the United States held a favorable view of socialism while only 47 percent had a favorable view of capitalism.  Younger Americans often associate capitalism with inequality and a stagnant labor market; they envision (perhaps in a vague manner) socialism as a more egalitarian and just society.

The United States does have a rich socialist history, but one largely hidden from the  public.  Socialists and Communists played a major role in organizing the industrial unions in the 1930s and also helped build the civil rights movement. Martin Luther King, Jr. sometimes self-identified as a democratic socialist and the two key organizers of the 1963 "March on Washington for Jobs and Freedom" were Socialist Party members Bayard Rustin and A. Philip Randolph. On the eve of World War I, the Socialist Party of Eugene Debs ranked as comparable in size and influence to many of the young socialist parties of Europe.  Not only did Eugene V. Debs receive six percent of the vote for president in 1912, but on the eve of U.S. entry into World War I, members of the Socialist Party held 1200 public offices in 340 cities, including 79 mayors in 24 states (among them Minneapolis, MN; Milwaukee, WI; Reading, PA; and Buffalo, NY).Brutally repressed by the federal government for opposing World War I and then during the McCarthyite Cold War hysteria, socialists never regained comparable influence; but as organizers and thinkers they have always played a significant role in mass social movements.

Structural biases in the U.S. electoral system in favor of a two party system make it difficult for socialists to win office as third party candidates.  Single-member, winner-take all legislative districts and direct election of veto-wielding executives (mayors, governors and presidents) create strong incentives to form broad "catch-all" parties that can win elections by capturing the median voter.  On the other hand, the open primary system in the United States means that candidates with very diverse political bases can run on the Republican or Democratic ballot line. The Democrats are today divided between affluent, suburban social liberals who are economically moderate to pro-corporate and a Black, Latino and trade union base which favors more social democratic policies.  Given the role of corporate money in elections, the national leadership of the Democratic Party has moved in a decidedly pro-corporate, "free trade" direction over the past 30 years, but less so the Democratic base. Sanders  represents the revolt of that base against the pro-corporate Democratic establishment.

Perhaps 20,000 or so people in the United States annually pay dues to some socialist organization; far more identity as socialists but do not belong to a socialist organization. Some socialists believe that U.S. political parties are ideologically as coherent as parties in other parts of the world. These individuals will not support any candidate, even an avowed socialist, who runs as a Democrat.  Two socialist organizations are openly working for Sanders for president; the most visible is Democratic Socialists of America (DSA), the largest socialist organization in the United States, with about 7000 dues paying members. The smaller Committees of Correspondence for Socialism and Democracy (CCDS)  does not endorse candidates, but is clearly enthusiastic about Sanders' run.  Socialist Alternative, a "cadre" organization out of the Trotskyist tradition,  argues that Sanders erred in running in the Democratic primaries;  but they urge Sanders backers to push him to run in the general election as a third party independent, if and when he loses the Democratic primary..   The rest of the alphabet soup of U.S. socialist organizations have denounced Sanders for running in the primaries of the Democratic "capitalist party," despite the fact that in just six weeks Sanders has received campaign contributions from 400,000 individuals, signed up tens of thousands of campaign workers, and introduced a social democratic program to millions who would most likely remain unaware of a marginal third party effort.

Most socialists are impressed by Sanders' ability to reach working people with a populist message that identifies the class warfare waged by corporate elites against working people as the cause of rampant inequality and stagnant living standards.  Sanders excels at reaching out to white working class populists, a skill he mastered in Vermont, which is 95 percent white.  But his 12-point platform focuses on economic policy issues and does not explicitly address racial justice issues such as mass incarceration, police brutality, voter restriction, and immigration reform. So far, the base of the Sanders campaign is white progressives; but 35 percent of Democratic primary voters are Black and Latino.

Even though President Bill Clinton's welfare reform and strict federal criminal justice sentencing guidelines had disastrous consequences for poor Blacks and Latinos, many mainstream politicians of color see Bill Clinton as a white Southerner who broke with the legacy of Jim Crow.  The Hillary Clinton campaign clearly views women and voters of color as her core constituencies. Thus, she has given major speeches calling for immigration and criminal justice reform, as well as the overturning of strict voter identification laws aimed at disenfranchising voters of color.  Her proposals may be quite moderate, but her multi-racial staff touts her attention to these issues. In response, an informal group of radical activists of color have been pressing the Sanders campaign to make racial justice issues central to his platform and to add  senior staff who have strong ties to communities of color.

The tragedy of the Jessie Jackson campaign of 1988 was that despite winning 8 million votes from white progressives, trade unionists, and activists of color, no democratic Rainbow Coalition organization emerged to continue working around issues of economic and racial justice after the campaign ended.  This time, activists must use their work for Sanders to build local, multi-racial coalitions that live on well after the campaign.  As part of that broader coalition, socialists hope to build much stronger organizational capacity.  None of the reforms Sanders advocates can be won without increasing socialism's legitimacy within US politics, as the political establishment of both parties deploy anti-socialist ideology against any reform  that challenges corporate power. Thus, instead of fighting for Medicare for All (and abolishing private health insurers), the Obama administration opted for an Affordable Care Act which expanded the number of insured via massive government subsidies to the private health care industry.

Democratic socialists are not sectarians; they participate in mass movements of feminists, people of color, and trade unionists for reforms that these communities desperately need to win tomorrow at 9am.  But as the erosion of the social democratic gains of the post-World War II era demonstrates, without greater democratic  control over the economy, capital will always work to erode the gains made by working people. Out of the Sanders campaign must come a stronger organization of long-distance runners for democracy - a stronger U.S. democratic socialist movement.

[Joseph M. Schwartz is a professor of Political Science at Temple University and a National Vice-Chair of Democratic Socialists of America (DSA). He is the author of The Future of Democratic Equality and The Permanence of the Political.]

A version of this article originally appeared on teleSUR .