Historically, the public sector has served as an equalizing institution through the expansion of job opportunities for minority workers. This study examines whether the public sector continues to serve as an equalizing institution in the aftermath of the Great Recession. Results point to a post-recession double disadvantage for Black women: they are concentrated in a shrinking sector of the economy, and they are substantially more likely be without work. 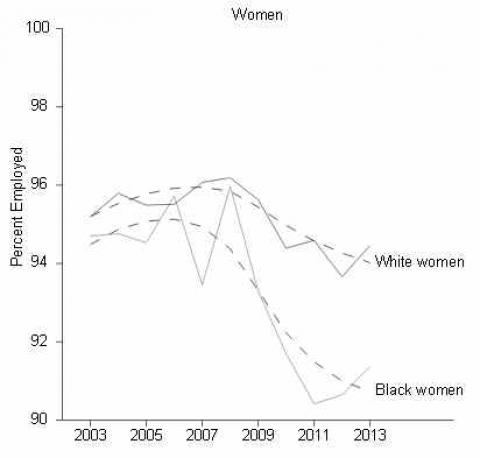 After recessions, government employment usually expands (Elsby et al. 2011). But after the Great Recession of 2007 - 009, government employment contracted. Aside from the two week shutdown of the federal government in 2013, most of the layoffs were made by state and local governments (Stevenson and Langan 2011). (The majority of public sector workers are employed by local government; less than a fifth are employed by the federal government.)    Severe cuts were made to police forces, fire departments, social service agencies, and school districts (Dewan and Rich 2012). Despite the billions allocated to preserve jobs through the American Reinvestment and Recovery Act of 2009, total government employment fell three percent between December 2008 and December 2013. Why did the government shrink after the Great Re-cession? Similar to previous recessions, the Great Recession led to a decrease in sales and income tax receipts. The drop in tax revenue after the Great Recession, however, was especially deep and long-lasting (Gordon 2012). Compared to earlier recessions, workers stayed unemployed for longer and the transition rate of workers leaving the labor force altogether was lower (Kroft, Lange, Notowidigdo, and Katz 2014). As a result of heightened demand for unemployment benefits and other government subsidies, budgets at both the federal and state level were stretched thin.

There are also political forces that contributed to the contraction of public sector employment. After the 2010 midterm election, the Tea Party and its supporters were vocal about their intent to cut public sector employee benefits and slash public spending (Skocpol and Williamson 2012). With tax revenues in freefall, political constraints against raising taxes, and a growing number of high-profile political attacks against public sector employees (including those led by governors in Wisconsin and Indiana), many states and municipalities resorted to drastic measures. In 2011, approximately 40% of state and local governments reported layoffs (Center for State and Local Government Excellence 2012).

The effects of public sector decline will be uneven simply because black workers - black women in particular - are over-represented in the public sector. In 2010, when state budget shortfalls reached their peak, 17% of black women in the Current Population Survey (CPS) worked in the public sector, compared to 15% of white women, 13% of black men, and 12% of white men (Oliff, Mai, and Palacios 2012). Yet there is also evidence that inequality increased within the public sector. Among women in the CPS who reported that their current or most recent job was in the public sector, there was a dramatic increase in the black / white unemployment gap from less than a percentage point in 2008 to a peak of 5.5 percentage points in 2011.  What accounts for the sudden increase in public sector employment inequality? This study considers potential explanations based on theories about human capital and occupational sorting. I examine black / white differences in public sector employment and unemployment after taking into account compositional differences in education and occupation. I also consider whether public sector whites are more likely to find private sector
employment.

The dynamics of public sector stratification are important for at least two reasons. First, social scientists consider the public sector to be a major source of economic mobility for black workers, particularly black women (Parks 2011;Zipp 1994). Understanding public sector decline should inform debates about between-race and within-race inequality in the United States. Second, by clarifying the link between public sector decline and racial inequality, this analysis advances the literature on the social and economic consequences of the Great Recession (Grusky, Western, and Wimer 2011).

Within the public sector, new patterns of employment stratification emerged after the recession. Black women are over-represented in a shrinking sector of the economy, and they are more likely than other public sector workers to be without work. These two trends are a historical break for the public sector labor market. I consider explanations based on compositional differences in education and occupational sorting. Models results show that even after controlling for education, occupation, and a host of other measurable factors associated with labor force attachment, there are significant race gaps in public sector unemployment and employment probabilities - particularly among women.

Unequal entry into public sector unemployment may be linked to recently-enacted policies at the local and state level. Wisconsin, for example, implemented sharp and immediate funding cuts for municipalities in 2011. Black public sector employment started to rebound after 2011 in most states, but in Wisconsin, black public sector employment continued to plummet into 2012. It may be that black workers are more likely to be laid off when the layoffs are triggered by a sudden and significant reduction in funding. When the number of layoff decisions increases, managers have more opportunities to discriminate.

Unfortunately the CPS does not have enough public sector workers to conduct a representative multivariate analyses at the state level. The protective effect of working in the public sector decreased substantially for black workers - especially black women - after the Great Recession, while white workers were relatively insulated. The preceding analyses suggest that without a course correction, further efforts to dismantle the public sector will most likely have a negative effect on the workers who have historically gained the most from public sector employment.