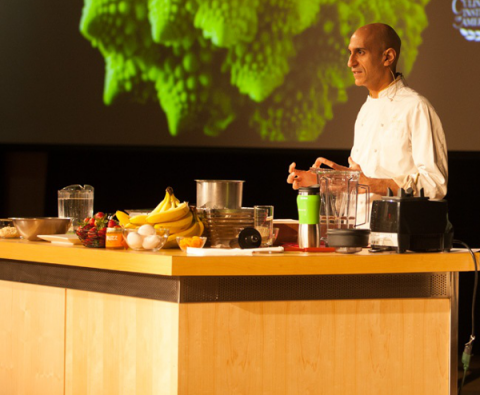 Good news: Restaurants aren’t plotting the deforestation of the planet, global warming or the universal fattening of society!
Better news: In fact, restaurants are at the cutting edge of effecting change in our food supply and supporting a more sustainable food system.

That was one of the main messages at the third annual Menus of Change conference, jointly presented by The Culinary Institute of America and Harvard University’s T.H. Chan School of Public Health. Granted, the CIA, being a culinary school, is inclined to be pro-restaurant, but the messages at this conference, attended by chefs, chain restaurant executives, non-commercial foodservice operators, academics, activists, journalists and assorted gadflies, can nonetheless be pretty dire. Last year’s meeting, held over a couple of rainy days in Cambridge, Mass., felt like a grim litany of problems that we probably weren’t going to solve, from cattle farts causing global warming, to lack of traceability causing fishery depletion, to over-use of antibiotics creating virulent germs that would kill us all, to Americans just gorging their way to diabetes and heart failure. As I left that conference I felt like we were all soon going to be bobbing (because of how fat we were going to be) above our underwater cities in dead oceans, somehow still fighting over the last cheeseburger as we gagged on methane.

This year, the conference, which ended on Friday, was held on The CIA’s beautiful Hyde Park, N.Y., campus. The sun was shining and spirits were high.
I’m not sure why, exactly. Many of the same issues discussed last year were on the agenda this year, too. And some of the news was worse.

Lance Price a professor at George Washington University’s Department of Environmental and Occupational Health, has been busy sequencing bacteria genomes, largely in Flagstaff, Ariz., and he found that the same antibiotic-resistant E. coli found in meat is causing urinary tract infections in humans — clear evidence that use of antibiotics in livestock, widely seen as excessive, is endangering human health. Although livestock producers are already voluntarily — with strong pressure from the Food and Drug Administration — stopping use of medically important antibiotics as growth promoters, Price called for an end to their use for disease prevention, too, and restricting them to be used only when absolutely necessary.

In terms of the environment, seafood sustainability and global warming were given the year off, not because things are better, I suspect, but because there’s nothing more to be said. Instead, the conference focused on fresh water shortages, and the news was bleak. Will Sarni, director for enterprise water strategy at Deloitte Consulting, said we’ve already reached the state predicted for 2025, in which two thirds of the world’s population lives in areas of physical water scarcity or stress an/or face economic water shortages.

“The past is not a guide to the future. Things really have changed,” he said.
“We’re essentially mining ground water.”
Then Thomas Harter, the Robert M. Hangan endowed chair of water management and policy at the University of California at Davis, underscored that point about mining ground water, noting that most of the places in the world where we grow food need irrigation, and due in part to drought (but also, Sarni noted, to growing populations and a rising middle class) we’ve been using and depleting our aquifers to grow food. Ground water has been so depleted, in fact, that seawater is intruding into it, he said. On top of that, those water sources are being contaminated by nitrates from excessive use of fertilizer, among other things.

But that sad news was reported on the last day of the conference, which was finished up by a rousing talk from Claus Meyer, owner of award winning Copenhagen restaurant Noma and, more importantly for this conference, author of the New Nordic Manifesto, a pretentious but influential declaration of how food should be sourced and treated (with a focus on local and seasonal products, ethically produced and treated with respect, without shying away from modern cooking techniques), that he hoped would translate to everyday culture.
About a decade ago, he said, he held his first symposium with what he called the gastro-intelligentsia, and asked participants (this is how I paraphrased it in my notes) if they were allowed to dream of handing to their children a food culture that was so much better than what they inherited from their parents. Asking people if they’re allowed to dream of something is beautiful and heartbreaking, and I imagine translated directly from Danish. Anyway, Meyer’s working to spread the gospel of wholesome food and plans to open a food hall in the profoundly underserved Brooklyn, N.Y., neighborhood of Brownsville.

But before the gloom and hopes and dreams was a positive story and plan of action summarized by Walter Willett, chair of the Chan school’s department of nutrition and also of the Menus of Change Scientific & Technical Advisory Council. Willett, possibly the most quoted nutritionist in the country, and certainly one of the best-respected, pointed out that the foods that are the greatest strain on our health (with the exception of sugar sweetened beverages) also are the greatest strains on the environment — namely red meat and dairy — and that we could solve both problems by eating what the Menus of Change conference has dubbed a “plant-forward” diet.

Not to be confused with a “plant-based” diet, which for some reason is code for a vegan diet, a plant-forward diet moves vegetables and whole grains to the center of the plate, topped with a little meat if you like, or mixed in with the meat, which is what the CIA did at the conference’s opening reception. It was its own version of burger bash, which is now a mainstay of food-and-wine festivals, in which guests gorge themselves on a whole bunch of different hamburgers, and are in fact encouraged to try all of them so they can vote on the best one.

The CIA’s version featured sliders, all mixed with vegetables. So the patty in the Flip Earth & Turf Burger was a mix of beef and ground mushrooms. The Moroccan Lamb-Eggplant Burger, which unsurprisingly blended lamb and eggplant, was topped with mint yogurt and caramelized peppers & onions. A delicious vegetarian burger was made with peanuts, mushrooms and farro, topped with arugula & tomato chutney, and chicken and caramelized cauliflower went into a patty topped with “fava-ghanoush” (you know, like babaghanoush, but with fava beans instead of eggplant) and spicy tomato jam.

Although institutional change governing what we eat has been slow — and Willett lamented that potatoes were approved as vegetables for school lunch (“They really don’t behave like other vegetables,” when we metabolize them, he said) — we are eating more fruits and vegetables even if you don’t count potatoes, he said, and our diets actually have been improving steadily since 1999.

Unfortunately, much of that dietary improvement has happened among richer Americans.
But, as I said 1,100 words ago, restaurants got a lot of praise, from chef-driven fast-casual restaurants offering more healthful items to chains getting rid of animals raised on antibiotics. Chick-fil-A got big praise for their announced plans to phase out chicken raised with antibiotics, and Panera Bread founder Ron Shaich was keynote speaker, discussing how his company was continuing to offer food that he thought was better for his customers and the planet.
All-in-all, it was good news for restaurants, and a more upbeat conference for everyone else.