Systemic problems require systemic solutions. Police alone cannot stop urban violence; it requires action on every front. Rising poverty in the nation's capital has been experienced primarily by black and Latino residents. The average white family's income is $110,757, according to Census estimates. For black families it's $39,081. There's a growing income gap nationwide. This kind of disparity breeds hopelessness, which drives people to acts of desperation and violence. 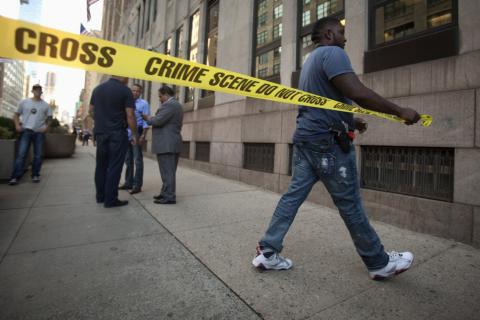 Cities across the U.S. are experiencing a spike in violent crime.,

Last May, newly elected D.C. Mayor Muriel Bowser met with city youths to discuss their concerns about policing and urban violence. Bowser insisted that the key to preventing the kind of riots that had raged in Baltimore and Ferguson, Mo. is to listen to young people's grievances and provide them with better opportunities. "They want to share with adults and government officials and the police what they have experienced in their neighborhoods, and it's high time we listen," she said in a radio interview about the town hall meeting.

Three months and more than 30 homicides later, Bowser laid out her plan to combat the surging homicide rate in D.C. But instead of presenting programs and strategies that address the root causes of youth violence, Bowser held a news conference to call for greater police presence, more aggressive law enforcement tactics and harsher criminal penalties - some of the very strategies that Black Lives Matter activists are protesting. Predictably, those activists shouted her down.

City leaders too often treat aggressive policing as the cure to urban violence, especially when that violence boils over into rioting. For local officials, law enforcement is an easy fallback, but it misses the mark. Violence is not just a matter of law and order; it's a matter of inclusion and opportunity.

Urban areas across the country are experiencing a disturbing spike in violence. In D. C., 105 people have been killed so far this year, as many as were killed in all of 2014. There have been killings on the grounds of a Catholic church and at a bus stop. People have been shot while riding a bike and riding the subway. Too often, the victim or the perpetrator is a child: Last month, a 17-year-old shot his 12-year-old neighbor.

In D. C. and other places, police chiefs and mayors have pointed to the rise of synthetic drugs and repeat offenders as the root causes for the spike in violence.

But that's not the whole story.

There are troubling disparities in the resources and opportunities available to residents in the nation's capital, depending on their neighborhood. In October 2013, residents of the predominately black Ward 8 had an unemployment rate of 24.2 percent - nearly 10 times higher than residents who lived just 5 miles away in the predominately white Ward 3. While that disparity has narrowed, Ward 8 residents are still three times more likely to be jobless.

Rising poverty in the nation's capital has been experienced primarily by black and Latino residents, who have been displaced by an influx of predominately white, high-income professionals. Citywide, the average white family's income is $110,757, according to Census estimates. For black families, it's $39,081.

There's a growing income gap nationwide. A 2011 study by the Sage Foundation and Brown University found that the U.S. middle class is shrinking, with one-third of families living either in poverty or affluence, up from 15 percent in 1970. This kind of disparity breeds hopelessness, which drives people to acts of desperation and violence.

Marginalization and alienation are dynamite just waiting for a match. People don't suffer in silence forever. Their pain always finds a way to express itself. As long as the levels of social and economic inequality exist, no city can absolve itself of the waves of violence, no city can be riot proof.

History has shown this. During the 20th century, D.C. experienced two major riots, each lasting about three days. The first, in July 1919, was initiated by white men, many of them veterans of World War I and angry about the lack of jobs upon their return. The riot was ignited by a series of allegations that black men had attacked white women, but the violence largely was fueled by deep socio-economic tensions and racial inequality, as were riots that occurred that summer in St. Louis, Tulsa and other cities.

The second riot in D.C. followed Martin Luther King Jr.'s assassination in 1968, when anger over housing and job discrimination, as well as police brutality, was at a peak.

When marginalization festers, it ultimately will explode. Today, in neighborhoods all over the country, we're seeing marginalization and neglect spark explosions daily in the form of gun violence. We can't continue ignoring its root causes. If we want to break the cycle of violence we have to break the cycle of sustained indifference that drives it.

Systemic problems require systemic solutions. Police alone cannot stop urban violence; it requires action on every front. We need apprenticeships that provide career pathways to jobs in government, technology, hospitals and educational institutions. Unions need to reach out to inner city youths to help them find routes to construction jobs and other growing industries that offer apprenticeships, upward mobility and lasting opportunities. The criminal justice system and local business owners must give young people with minor criminal records a real chance to succeed. And universities like my own, Georgetown, must open their classrooms not only to students seeking four-year degrees, but also offer its expertise to under-served communities that need skills and training for high-demand healthcare, IT and paralegal professions.

In early October, a number of local nonprofits and service organizations are hosting a daylong program with D.C. officials and policy makers to explore how some public policies fuel inequality - from excessive criminal penalties imposed on non-violent first-time offenders to the destruction of public housing units that displace already struggling families without alternative affordable housing in the city - and to offer concrete proposals that alleviate social disparities. Additionally, the two-year-old D.C. Commission on African-American Affairs, of which I am chair, plans to hold community forums that bring together youth, civic activists and business leaders. But those discussions are just a start. If we want to end urban violence, we must act to end hopelessness. That means fixing poor education, providing more job opportunities, and eradicating income inequality in our cities. We can't rely on local police forces to do that.

[Maurice Jackson is a history professor at Georgetown University and chair of the D.C. Commission on African-American Affairs.]