Controversial posting, by a long-time peace and social justice activist - Obama is the best occupant of the office since the end of World War II. We're unlikely to elect anyone of his quality in 2016. Like all presidents post-World War II, he has presided over the world's most (super) powerful empire. 'American exceptionalism' and flouting superior military and economic might, the empire systematically generates negative consequences for peace at home and worldwide. 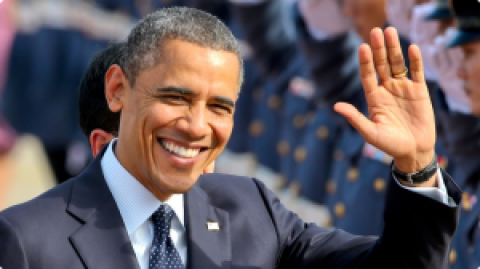 Not long ago, a couple of writers in the left magazine, Jacobin, opined that Barack Obama was the worst President since Warren Harding. Rightist bigots attack him as the worst of all time.

I think Obama is the best occupant of the office since the end of the Second World War. We're unlikely to elect anyone of his quality in 2016.

Like all presidents post World War II, Obama has presided over the world's most (super) powerful empire.  Boasting "American exceptionalism" and flouting superior military and economic might, the empire systematically generates negative consequences for peace and the human condition at home and worldwide.

Disappointments in the `State of the Union', about domestic and foreign affairs, are many and profound. I'm not about to argue that Obama should be absolved of responsibility for an interventionist foreign policy, for widespread acts of war, for commitment to the vast surveillance program and the "security state", or for the influence of his Wall Street advisors over economic policy.

How then can one view Obama favorably? What should one make of the obvious contradictions in Obama and his presidency? And why does it matter?

The simple observation by Fidel Castro when Obama was first elected turns out to be spot on: `he's a good guy, but the system is stronger than he is'. However, the fuller truth is much more complicated. Certainly the system can't be overcome by an individual no matter how high his office. But it's a deeply stressed system, unable to control events, far from immune to resistance and change.

There is much to learn from Obama's two terms now almost over - about the man and, most important, about our society.

About Obama, there is another side to the coin of his limitations and loyalty to the basic character of an oppressive system. There is no mistaking that he holds dear many humane and democratic values that are actually in conflict with the essential nature of the system, values that are connected to the historic struggle to expand freedom in our country. Nor should one underestimate his achievement in winning majority support twice as the first African-American president - this despite a terrible history of racism that remains fiercely alive today.

Like a multitude of fellow Americans, when I first read "Dreams of My Father", I was deeply impressed by Obama's exceptional intelligence as well as his humanity. I'm still impressed by those qualities evident in some of his more important speeches. I can't dismiss as "rhetoric" his address after the Charleston massacre or the recent one on the Iran agreement (although his compellingly logical argument for diplomacy was accompanied by usual misrepresentations of US policy). It isn't necessary to watch the GOP presidential debates to see Obama as exceptional. In qualities of mind and character, few if any among those in high political office during the last half century are his equal.

Yet, during Obama's presidency, the impact of reactionary forces on the political and economic trajectory of the country grew dangerously. The GOP moved even further to the extreme right, fought tenaciously to wreck Obama's presidency and to sabotage the most elementary social responsibilities of government. With a huge assist from the Supreme Court majority, interference in elections and politics by oligarchs like the Koch brothers and Sandy Adelson has grown apace with soaring economic and social inequality overall. And at the heart of the assault on Obama has been open, as well as often denied, racist fury at the very idea of a black president and family in the White House.

Obama's accomplishments have been important even if far from the original promise. Noteworthy is the major expansion of health care against a hurricane of hard-hearted resistance and greed. He tempered the war lust fostered by neocon hawks, some of them in his own administration, although he expanded "alternative" tactics of widespread drone bombings and assassinations in violation of international law.

Now, in the last stage of his presidency, the Obama "we hoped for" may be here (almost). Most important, he is putting up a fight for a more realistic and potentially peaceful approach to foreign policy, oriented to diplomacy and negotiation rather than the hubris of US superpower. There is the Iran agreement and a new attitude toward possible cooperation with Russia in Syria and with regard to ISIS. These are only a beginning of a turn toward a practical, common sense approach to international cooperation needed to cope with the problems plaguing this century. Inevitably, resistance from wealthy selfish interests and the GOP matches the hysteria mounted against "Obamacare". Restoring diplomacy and the influence of the United Nations is also anathema to the Netanyahu government, which fears that shifting winds will undermine its apartheid colonial rule over the Palestinians.

Obama is now more assertive on domestic issues: racism, immigrant rights, the justice and prison systems, the minimum wage, women's equality, and more. Looking back, Obama's presidency suffered from a stubborn faith that his special powers of persuasion could bring about bipartisanship, his determination to convince Wall Street of his essential loyalty to the system, and his desire to calm racist fears that he might be "an angry black man". As a result, he put a barrier between his presidency and the kind of citizen participation and support that might have made it transformative. 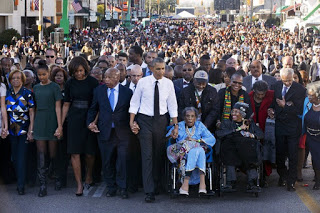 Important progressive advances during the Obama presidency have come from the grass-roots. Starting with a determined and militant movement, public opinion was transformed on gay rights and marriage equality. The institutions of government had to accept the new reality. The "Black Lives Matter" movement is also forcing a wider recognition of intolerable injustice and racist brutality. Tremors are beginning to be felt in challenges to the shameful racism that corrupts the criminal justice and prison systems.

Looking at the Obama presidency, now mostly through the rear view mirror, doesn't tell us where we go from here. But there are some things to be taken to heart and mind.

Leaders, even presidents, may be better or worse but they cannot be saviors. What counts most is achieving a critical mass of public support for causes that sustain progress and challenge the worst evils of a destructive system. Easier said than done, but possible as experience makes clear. The process of popular struggle illuminates every democratic gain in our history. It defines democracy itself.

Our capitalist system of inequality and greed can crush people and their hopes. But it is neither invincible nor immune to change. Nor is the power establishment monolithic in the control of public policy.

The divisions in our society, including at the top, are a very important part of the policy equation. The rise of extreme reaction in most branches of government, fueled by a clique of ultra-right oligarchs, is an immediate and existential threat to the nation and to the world. The face of Carly Fiorina may or may not be "beautiful", but her prescriptions for the future sound like an American "Mein Kampf". And most of her stage mates are just as violent whether it comes to war-mongering or lying about Planned Parenthood. That crowd has already "elected" most governors, controls most state legislatures, has a lasting Supreme Court majority, and at least temporary control of the Senate and the House. What a dangerous world this is! It would be crazy to ignore how much worse it could get if the ultra-right is in full control.

The dilemma is that one can't rely on Clinton-Schumer Democrats not to succumb to rightwing pressure and hawk hysterics. The very limited steps by Obama toward a realistic and less warlike foreign policy might be aborted.

There is no easy answer, but an answer nevertheless. Despite howls from the GOP and their friend Netanyahu, despite 30 million AIPAC dollars, there is enough support to sustain the Iran agreement - and that includes a majority of American Jews who underwent the fiercest badgering. Hopefully that can be replicated and expanded in efforts to get the most out of the Democratic primaries.

It has never been harder to predict the future and maybe it's pointless after all. I think the only real answer is in expanding public awareness, in struggles and support for movements determined to turn the tide on climate change, the search for peace, and each issue of justice and equality. Above all, the tide has to be turned, and soon, against those who would plunge America and the world into a rerun of the horrors of World War II.

Obama fell short of being the transformative leader he hoped to be. Still he deserves honorable recognition as one of our most significant presidents. Maybe in the course of events, a transformative popular movement can be the source of inspiring leaders that the country surely needs.

[Leon Wofsy is Professor Emeritus of Molecular and Cell Biology / Immunology at the University of California at Berkeley. His career in science and academia began when he was almost forty years old. Earlier, for more than fifteen years, he was a leader of Marxist youth organizations. That experience began during the student upheavals at New York's City College (CCNY) in the late 1930s, and encompassed the time of McCarthyism in the 1950s. He became a professor at UC Berkeley in 1964 just as the Free Speech Movement was about to erupt. He is the author of many scientific papers and articles on social issues. He edited a book on the Cold War, Before the Point of No Return (Monthly Review Press, 1986). His memoir, Looking for the Future (IW Rose Press, 1995) is available online in the Free Speech Movement Archives, Book Collection, UC Bancroft Library.]