Today we are fighting back for the respect of the Geneva Conventions. As a medical humanitarian organization, we are fighting back for the sake of our patients. We need you, as members of the public, to stand with us to insist that even wars have rules. This was not just an attack on our hospital-it was an attack on the Geneva Conventions. This cannot be tolerated. These Conventions govern the rules of war and were established to protect civilians in conflicts... 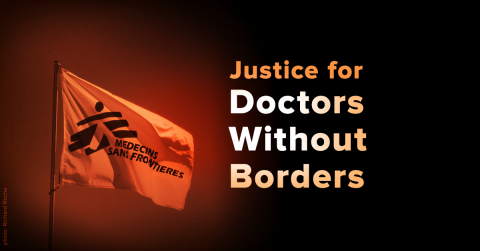 Good morning, and thank you for being here. As noted, I am Jason Cone, the executive director of Doctors Without Borders/Médecins Sans Frontières (MSF), known internationally as MSF.

As you have probably already seen this morning, Doctors Without Borders is calling for an independent fact-finding investigation to ascertain the truth about the events that led to the killing of our colleagues and patients by US.airstrikes on one of our hospitals in Kunduz, Afghanistan.

On Saturday morning, October 3, Doctors Without Borders patients and staff killed in Kunduz joined the countless number of people who have been killed around the world in conflict zones and referred to as "collateral damage" or as an "inevitable consequence of war." There are no "mistakes" under international humanitarian law.

The attack on the MSF hospital in Kunduz was the biggest loss of life for our organization in an airstrike. Tens of thousands of people in Kunduz can no longer receive medical care now when they need it most. Today we say: enough. Even war has rules.

In Kunduz our patients burned in their beds. MSF doctors, nurses, and other staff were killed as they worked. Our colleagues had to operate on each other. One of our doctors died on an improvised operating table-an office desk-while his colleagues tried to save his life. 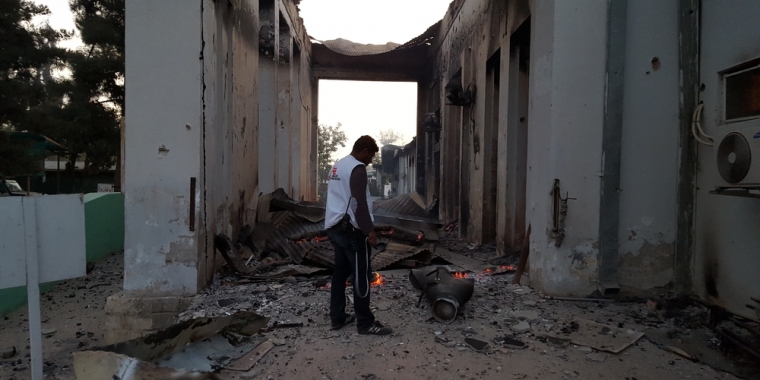 An MSF staff member on the ground of the Kunduz trauma center, hours after it was badly damaged by sustained bombing.
photo: MSF

This was not just an attack on our hospital-it was an attack on the Geneva Conventions. This cannot be tolerated. These Conventions govern the rules of war and were established to protect civilians in conflicts-including patients, medical workers, and facilities. They bring some humanity into what is otherwise an inhumane situation.

The Geneva Conventions are not just an abstract legal framework-they are the difference between life and death for medical teams on the frontline. They are what allow patients to access our health facilities safely and what allows us to provide health care without being targeted.

We know the reality of war quite well-over 40 years Doctors Without Borders medical teams have been treating the sick and wounded in nearly every major war-from Afghanistan to Bosnia, to South Sudan and Somalia, and to Syria and Yemen. It's important to note that speaking out on behalf of our patients and protection of the medical mission is core to our work.

It is precisely because attacking hospitals in war zones is prohibited that we expected to be protected. And yet, ten patients, including three children and twelve of our staff, were killed in the aerial raids.

The facts and circumstances of this attack must be investigated independently and impartially, particularly given the inconsistencies in the US and Afghan accounts of what happened over recent days. We cannot rely on only internal military investigations by the US, NATO, and Afghan forces.

Today we've announced that we are seeking an investigation into the Kunduz attack by the International Humanitarian Fact-Finding Commission (IHFFC.org). This Commission was established in the Additional Protocols of the Geneva Conventions and is the only permanent body set up specifically to investigate violations of international humanitarian law, such as attacks on hospitals which are protected in conflict zones.

This is not a UN body; it was formed under the Geneva Conventions.

We've asked signatory States to activate the Commission to establish the truth and to reassert the protected status of hospitals in conflict.

Though this body has existed since 1991, the Commission has not yet been used. It requires one of the 76 signatory States to sponsor an inquiry. Governments up to now have never activated the commission. The tool exists and it is time it is activated.

Once activated, the Commission enquires into the facts and investigates whether or not a grave breach or violation in the Geneva Conventions or Protocol 1 has occurred. A report establishing the facts is submitted to the parties of the conflict. The report is not made public unless agreed by the parties to the conflict. In the case of Kunduz, we will push for full transparency of the findings.

We are calling on President Obama to consent to the fact-finding commission. Doing so will send a powerful signal of the US government's commitment to and respect for International Humanitarian Law and the rules of war. This is not only about the deaths of our staff and patients in Kunduz-it is about the safety and security of our medical teams around the world trying to assist victims of conflict. It is about our patients in Afghanistan, our patients in Yemen, our patients in Ukraine, our patients in Syria.

Thank you for your time. I am happy to answer questions. 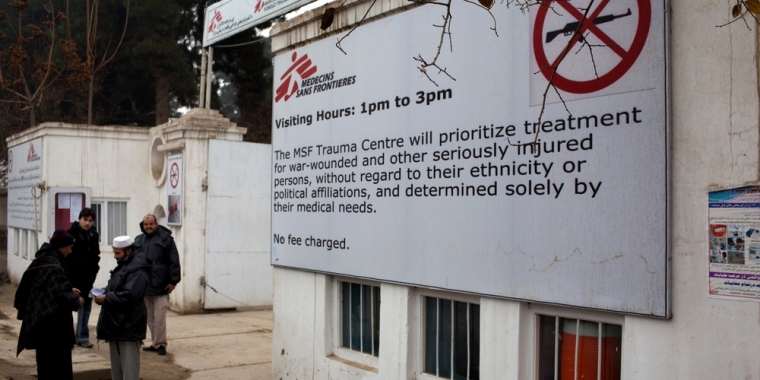 From 2:08 a.m. until 3:15 a.m. on Saturday, October 3, the Doctors Without Borders/Médecins Sans Frontières (MSF) trauma hospital in Kunduz, Afghanistan, was hit by a series of aerial bombing raids at approximately 15-minute intervals. The main hospital building, which housed the intensive care unit, emergency rooms, and physiotherapy ward, was hit with precision, repeatedly, during each aerial raid, while surrounding buildings were left mostly untouched.

"We received President Obama's apology today for the attack against our trauma hospital in Afghanistan. However, we reiterate our ask that the US government consent to an independent investigation led by the International Humanitarian Fact-Finding Commission to establish what happened in Kunduz, how it happened, and why it happened."
-Dr. Joanne Liu, MSF International President