When "Beer City" Becomes "Fear City": How the Billionaire Class Paints Over Poverty

That’s why every ad or video has the tagline, “Experience Grand Rapids.” Honestly, it is a great experience, if you only spend time downtown. But what is that experience like for the workers who toil there before heading back to the neighborhoods where they pay a mortgage or rent? 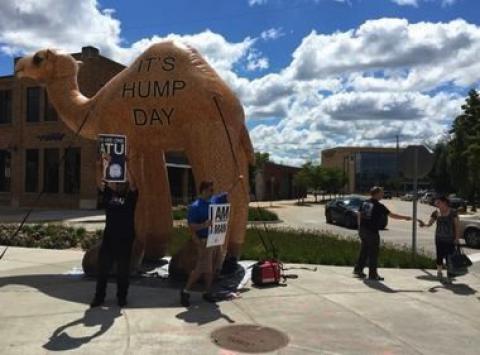 Members of the Amalgamated Transit Union display a 15-foot inflatable camel and pass out fliers outside of The Rapid Central Station Wednesday, Aug. 12, to draw attention to negotiation issues with the transit system., Andrew Krietz | MLive.com

Go to Grand Rapids, Michigan, and the tourism bureau’s sales pitch is unavoidable. Sweeping videos advertise “A City of Art,” “A City of Design,” “Top 10 City for R&D Investment,” “Best Place to Invest,” a “Learning Lab” for transit, and my favorite, “Beer City USA.”

There is good reason that Grand Rapids tags itself with such lofty monikers. While the rest of Michigan, especially Detroit, has been obliterated to make room for austerity, Grand Rapids was made a petri dish for it instead. When American manufacturing was dismantled, setting the stage for the long decline that continues today, western Michigan billionaire families with names like Van Andel, DeVos, and Meijer teamed up with their accomplices in elected office to repackage the city.

The formula here is similar to other small American cities trying to make themselves into destinations: promote public art, invest in shiny but redundant transit options like streetcars and gondolas, build a ferris wheel or a new arena, subsidize hip businesses to draw those elusive “millennials.”

Once they finished this taxpayer-funded and billionaire-supplemented paint job in Grand Rapids, they shooed away the homeless to shelters and storefront nooks on Division Street. Then, they lured in the conferences and investors, the craft breweries and big tickets concerts with a clear message: “Look at this pristine, Truman Show utopia we’re creating!”

That’s why every ad or video has the tagline, “Experience Grand Rapids.” Honestly, it is a great experience, if you only spend time downtown. But what is that experience like for the workers who toil there before heading back to the neighborhoods where they pay a mortgage or rent?

To start, nearly 27% of Grand Rapids residents live below the poverty line. Many of these are the front-line service workers who live in fear of losing a job if they don’t smile widely enough for the out-of-touch, big-salaried customers who play downtown and then flee to the suburbs at night.

Yet the political class in town has decided to make the city’s poorest bear the heaviest burden. When panhandling reached a crisis level, they did not invest in education, healthcare, or employment programs. Instead, they criminalized begging altogether. It took a 2013 ACLU lawsuit to finally overturn the law. Asking for help from strangers when you’re at your most vulnerable is not a crime; it’s an act of desperation and a protected First Amendment activity.

But the courts couldn’t stop the most recent attack on the poor: an unprecedented 16.1% fare increase for bus riders supported by the Board of Directors at The Rapid, the city’s transit agency. While it is blasphemy to tax the rich in Grand Rapids, it is apparently fine to tax the transit-dependent.

The Rapid’s CEO, Peter Varga, told a Michigan Public Radio reporter this: “The whole purpose was to get people to buy multi ride tickets to make it easier for them to board.” I became a bus driver in 1978. I want easier boarding, too. But the reason people buy single-ride tickets is not because they’re stupid. It is because they do not have the cash liquidity to purchase multiple rides at once. They are afraid of spending too much on one need for fear they won’t have enough for another tomorrow.

Moving up the economic ladder, the few middle class jobs that remain are also under attack. The 300 bus operators and mechanics who operate The Rapid are the target du jour. They represent a cross-section of Grand Rapids: black and white, immigrant and Native American, young and old, high school and college graduates alike. Their job isn’t easy. Because the city won’t address the root problems of poverty and city leaders hide out from those who suffer most, the public’s rage is taken out in the form of assaults on bus drivers. Shots have even been fired through bus windows. How does The Rapid, on whose Board sits the current Mayor and Mayor-elect, respond? By terminating the long-established pensions of these devoted civil servants.

For the past month, Amalgamated Transit Union Local 836, which represents those workers, has been campaigning against the fare hike and pension theft proposals. When they attempted to leaflet transit riders about these issues, Varga and The Rapid Board threatened to arrest and fire them, even though they were volunteering on their own time. The union had to file a First Amendment lawsuit against the agency and won a preliminary injunction.

Rather than reining in a Constitution-violating public official or reviewing the financial counterpoints offered by the union on the pension issue, The Rapid Board did something that makes Congress look in-touch. In one night, the Board chose to raise fares on riders, to terminate the pension and contract of workers, and to increase Varga’s salary to $203,000. They literally endorsed taking from the poor and to give to the rich.

That brings us to the top of the economic ladder here in Gerald R. Ford territory, where anti-tax and anti-government sentiments have long ruled. Ideologues at places like the right-wing Mackinac Center for Public Policy don’t think we should invest in a safety net for the quarter of our neighbors who fell between the cracks or that we should maintain pensions so retirees aren’t forced onto government programs later. Instead, they advocate eliminating the safety net for the poor and demanding that middle class families sacrifice even more. Their supposedly Democratic counterparts have mostly stayed silent, afraid to poke the billionaires and their selected officials in the eye.

If you are poor or middle class in Grand Rapids, you are expected to be quiet, be invisible, or be afraid. If you’re rich, you can bring your family, ride the new bus made just for you, see a show, and have a beer. Fortunately, labor unions, community organizers, student groups, and bus riders have united in recent weeks and are building a movement to expose the ugly truth: Grand Rapids isn’t Beer City; it’s Fear City.

Larry Hanley is the President of the Amalgamated Transit Union