Workers from Alameda County Industries made the decision to join ILWU Local 6. They convinced the city to provide funding to raise their wages in a new union contract. Their wages are now steadily increasing and will reach $20.94/hour in 2019. Photo essay by David Bacon. 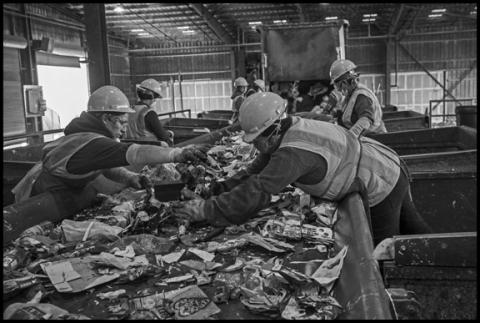 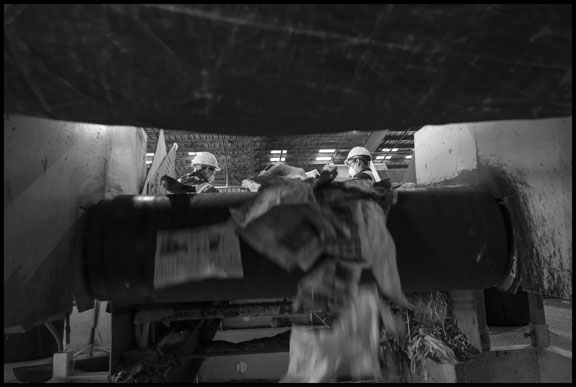 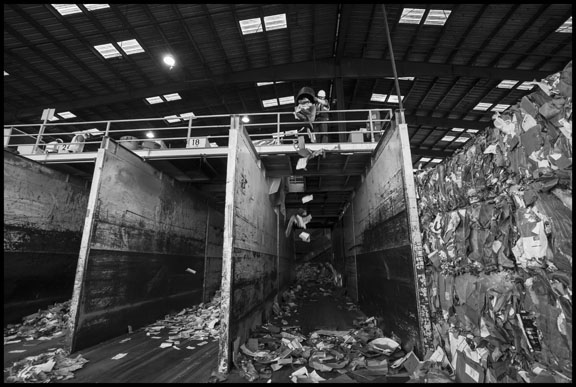 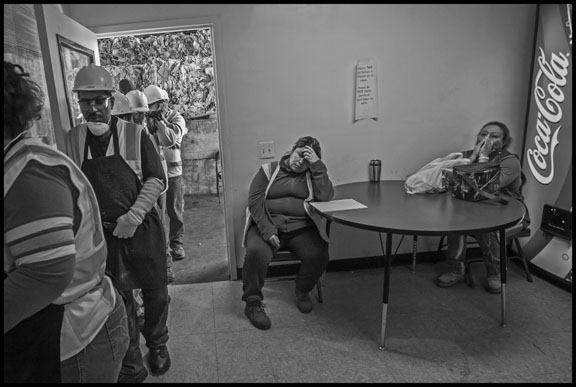 SAN LEANDRO, CA  - ACI workers clock out at the end of the day, and sit in the break room exhausted. 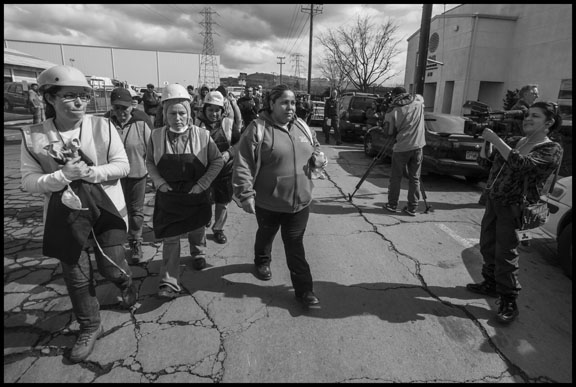 SAN LEANDRO, CA - ACI workers walked out on strike to protest the company's decision to fire workers accused of not having legal immigration status. They were protesting low wages of $8.30 an hour, and the company's refusal to honor San Leandro's Living Wage of $14.17/hour.  The workers filed a suit after learning their wage was illegal, and the company then began firing people. 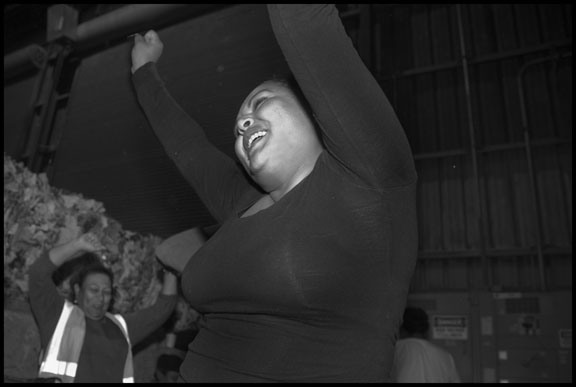 SAN LEANDRO, CA  - ACI workers cheer in the company break room to celebrate the victory of the union in an election at the company.  Workers voted for Local 6 of the International Longshore and Warehouse Union. 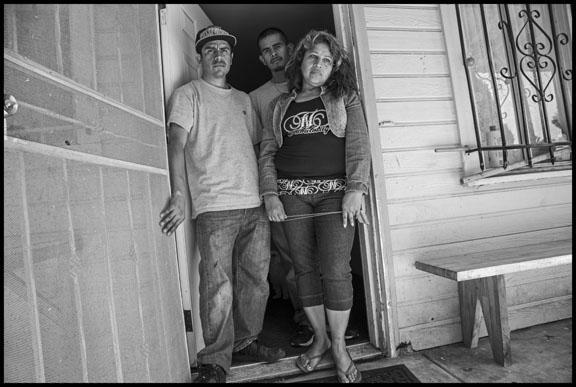 OAKLAND, CA - Griselda Mora and her two sons at home, after she was accused of not having legal immigration status and fired. 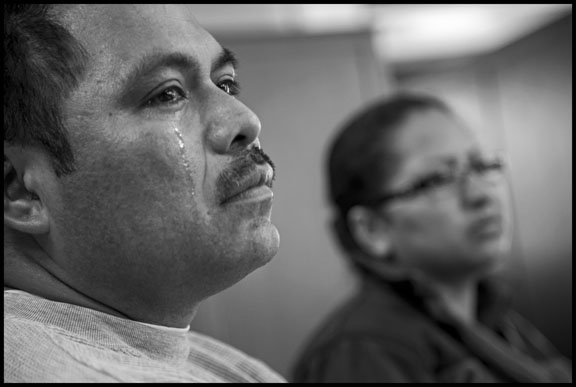 ALAMEDA, CA - Leaders from several churches gave money to Divina and Alfonzo to help them with their rent, after they were fired from jobs at ACI.   Divina and Alfonzo worked there for 14 years.  They received help with their rent from Buenavista Church in Alameda, part of an effort by the Interfaith Coalition for Immigrant Rights to keep fired workers from losing their homes. 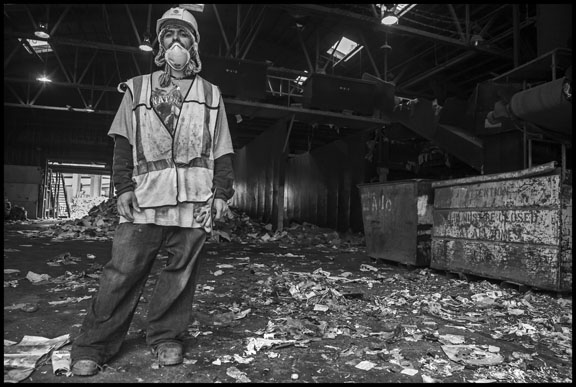 SAN LEANDRO, CA - Jaime Muñoz was one of the strikers when workers at recycling sorting facilities in Oakland and San Leandro struck for one day to demand safety improvements and protest bad wages and working conditions.  He earlier had lost his job at the Pacific Steel foundry when immigration authorities forced the company to fire them over their immigration status. 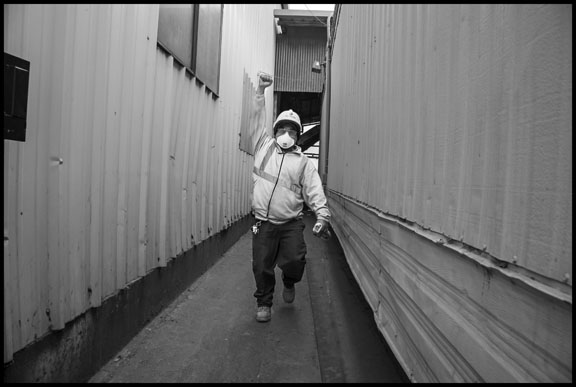 OAKLAND, CA - A worker walks out of the plant during a one-day strike at California Waste Solutions, where workers already belonged to Local 6 of the International Longshore and Warehouse Union.  This was one of many actions that brought wages in all union East Bay recycling facilities up to the same standard of $20.94 by 2019. 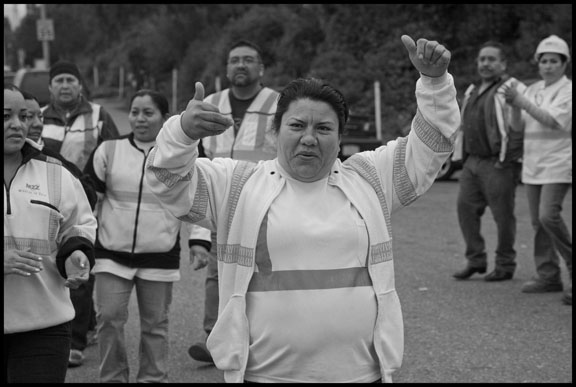 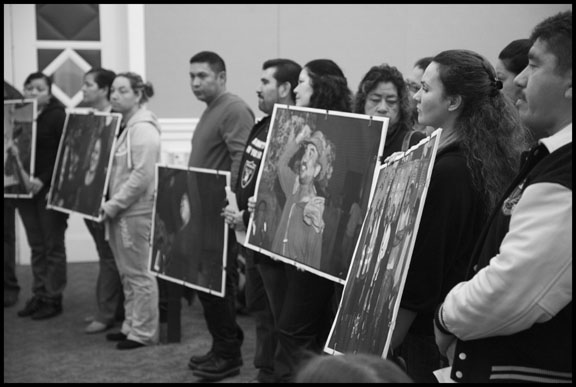 ALAMEDA, CA - Workers from Alameda County Industries speak at a meeting of the Alameda City Council, holding photos to show the city that they made the decision to join ILWU Local 6.  They convinced the city to provide funding to raise their wages in a new union contract. Their wages are now steadily increasing and will reach $20.94/hour in 2019. Using the photos in this way is a project of a group of social movement photographers, Class Conscious Photographers.

The Right to Stay Home - justice for migrants and sending communities - a presentation by David Bacon in Berkeley CA on May 5, 2015

Thanks to the David Bacon, the author-photographer, for sending this to Portside.