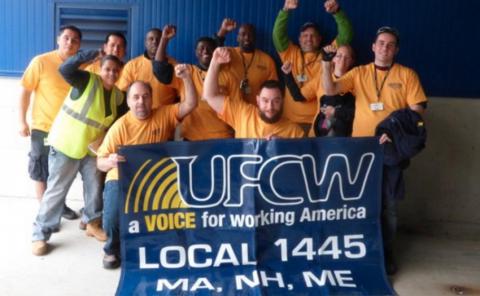 (UFCW) , (UFCW)
A small group of IKEA workers in suburban Boston launched a union organizing campaign this week—and immediately attracted the support of Democratic Party presidential candidates Bernie Sanders and Martin O’Malley.
The overnight warehouse crew at the IKEA store in Stoughton, Massachusetts, met with local managers November 11 to request that the home furnishing retailer recognize the United Food & Commercial (UFCW) union as its legal representative, IKEA worker Chris DeAngelo tells In These Times.  The pro-union employees presented a petition in favor of the union signed by 75 percent of the 32-member warehouse crew, DeAngelo says.
Letters of support were immediately issued from the presidential campaign organizations of Sen. Bernie Sanders (I-Vermont)  and former Maryland Gov. Martin O’Malley. In a coordinated effort, both called on IKEA U.S. President Lars Petersson to recognize the union voluntarily, consistent with the company’s stated labor policies of respecting collective bargaining rights.
Further, Switzerland-based UNI Global Union General Secretary Philip Jenkins issued this statement at precisely the same time: “Here at the meeting of our World Executive Board, the affiliates of UNI, representing 20 million workers, including those working at IKEA stores the world over, have stated their unequivocal support for the brave actions of workers in IKEA Stoughton.”
UFCW has been supporting pro-union workers at the IKEA Stoughton store for nearly a year, DeAngelo says. Discontent has been simmering, the eight-year company veteran says, with a harsh regimen of workplace discipline and arbitrary decisions on wages. “Job security is a major issue, and general fairness in increases and promotions. … All policies are applied differently,” he says.
“People have been fired for ridiculous reasons. It was almost irrational. One guy got fired when he got to work 12 minutes late, and that was on a day we had a brutal snowstorm. … Another guy got fired when he was late because his car broke down.”
When the growing union sentiment became obvious to local managers, there was a quick change in attitude, DeAngelo further reports. “Earlier this year they were very harsh with us. I would say draconian. But then in August, they turned 180 degrees, it was like night and day. They started to put up notices reminding us how good our benefits – they had never done anything like that before,” he says.
Workers even saw notices posted in Portugese, as a nod to a group of employees of Cape Verdean descent, he says. “We had never seen anything like that before.”
DeAngelo tells In These Times that workers are hoping this charm offensive will lead to IKEA granting voluntary recognition to the union, even though there is no history of the company doing so at other U.S. locations. The workers gave IKEA a 72-hour deadline to respond. “If they don’t respond, or say no, then we’ll have to decide on the next steps,” he says, but a likely step would to file for a National Labor Relations Board-supervised election.
IKEA set the pattern for NLRB elections for its warehouse workers when union organizers swept through the company’s five large stand-alone distributions centers in 2011-2013. The International Association of Machinists (IAM) won elections to represent workers at three of the centers, and the Teamsters won at a fourth. Those efforts had, in turn, been spurred by a successful IAM organizing drive at the IKEA-owned Swedwood furniture manufacturing plant in Danville, Virginia.
Aside from the presidential candidate support, another twist in the Stoughton story is that the organizing campaign is limited (at least at this stage) to the warehouse crew, known in IKEA parlance as the “Goods Flow In” department. It therefore leaves out about 165 IKEA retail workers on the same site.
The Goods Flow In workers are quite distinct from the retail workers, DeAngelo says, in the sense that they work 2:00-to-10:00 a.m. shifts loading and unloading trucks, and are rarely seen by the store’s customers. DeAngelo, for example, spends most of his time operating a forklift as goods are moved around the warehouse space where customers are not allowed.
This may become a point of contention if NLRB proceedings are initiated. Lobbying organizations for retail store nationwide launched a publicity campaign last year aimed at a NLRB decision involving Macy’s department stores and so-called “micro-unions.” The decision said it was perfectly appropriate for union organizers to divide the workers at individual stores in to smaller discrete bargaining units, even if the store managers objected. Lobby groups like the National Retail Federation and Retail Industry Leader Association objected.
UFCW spokesperson Moira Bulloch tells In These Times that the union has no additional information available at this time about the recruitment of Sanders and O’Malley as supporters of the Staughton workers. Nor did she know whether leading Democratic candidate Hillary Clinton had been asked to join Sanders and O’Malley.
BRUCE VAIL
Bruce Vail is a Baltimore-based freelance writer with decades of experience covering labor and business stories for newspapers, magazines and new media. He was a reporter for Bloomberg BNA's Daily Labor Report, covering collective bargaining issues in a wide range of industries, and a maritime industry reporter and editor for the Journal of Commerce, serving both in the newspaper's New York City headquarters and in the Washington, D.C. bureau.