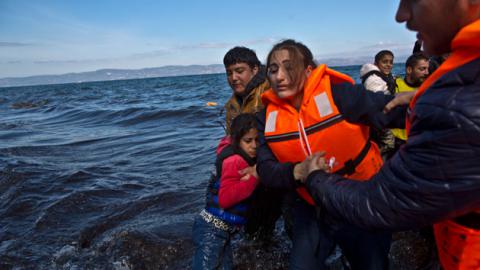 Syrian refugees arrive at the Greek island of Lesbos on October 1, 2015., AP Photo/Muhammed Muheisen // Mother Jones
Here Are 5 American Leaders Standing Against the Fear of Syrian Refugees
By Bryan Schatz
November 18, 2015
Mother Jones
Since the terrorist attacks in Paris on Friday, more than half of America's governors have issued statements saying they would bar Syrian refugees from entering their states-despite having no legal authority to do so and disregarding the nation's strict vetting process for refugees. The statements come amid a rising tide of fear and anti-refugee sentiment among the American public: More than half of Americans polled by Bloomberg said the United States should not continue with plans to resettle 10,000 Syrian refugees, while a survey from NBC News published late Wednesday contained similar results. But at least a few American political leaders are pushing back.
Pennsylvania Gov. Tom Wolf
Early Monday morning, Wolf sent a letter to lawmakers in Pennsylvania in response to Republicans calling on him to not accept Syrian refugees. He wrote, "We must not forget that those fleeing Syria-and other places in crisis-are families, elderly, and orphaned children seeking to escape a daily life that includes the same horrific violence that occurred in Paris...Our commonwealth can be a safe haven for refugees."
Minnesota Gov. Mark Dayton
On Monday, Dayton called statements from his fellow governors who want to bar Syrian refugees "ludicrous":
"I think it's showmanship on the part of the governors...I want to protect the people of Minnesota every bit as much those governors want to protect the people of their states. To stand up there with swagger, and say 'I'm going to prevent the wrong people from entering my state' to me is just ludicrous."
Oregon Gov. Kate Brown
Brown took to Twitter on Tuesday to say that Oregon will "open the doors to opportunity" for displaced people. 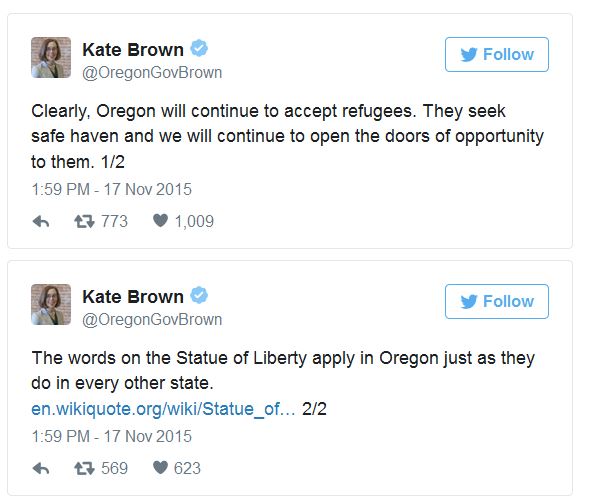 Sen. Elizabeth Warren
In a 12-minute address on the Senate floor on Tuesday, Warren of Massachusetts gave an impassioned critique of efforts to reject asylum seekers: "We are not a nation that delivers children back into the hands of ISIS murderers." She added, "It is easy to proclaim that we are tough and brave and good-hearted when threats feel far away-but when those threats loom large and close by, our actions will strip away our tough talk and reveal who we really are."
President Barack Obama
In a dig against Republican politicians, and particularly against New Jersey Gov. Chris Christie-who said he opposes US resettlement of Syrian refugees, even three-year-old orphans - Obama said on Tuesday, "Apparently they are scared of widows and orphans coming into the United States of America. At first, they were too scared of the press being too tough on them in the debates. Now they are scared of three-year-old orphans. That doesn't seem so tough to me."
Washington Gov. Jay Inslee
Inslee, in an interview with NPR on Wednesday, stated that he would not be joining the growing list of governors opposing refugees. Referencing Japanese internment camps, he noted:
"I live on Bainbridge Island, this little island just west of Seattle. And it was the first place where we succumbed to fear, in 1941 after Pearl Harbor.And we locked up Washington and American citizens, and we sent them to camps for years while their sons fought in the Army in Italy and were decorated fighting for democracy.We regret that. We regret that we succumbed to fear. We regret that we lost moorage for who we were as a country. We shouldn't do that right now."
Other political leaders voicing support for refugees include Democratic presidential candidates Bernie Sanders and Hillary Clinton, Congressman Seth Moultan, Colorado Gov. John Hickenlooper, and California Gov. Jerry Brown.
This article has been updated.
[Bryan Schatz is an editorial fellow at Mother Jones in San Francisco. He has previously written for Mens Journal, Outside, Pacific Standard, and 5280 Magazine. Connect with him on Twitter @bryanschatz or send him a note at bschatz@motherjones.com. ]
Refugee Decision is a Moral Decision
By Sergio Gonzalez
November 18, 2015
Milwaukee Journal-Sentinel 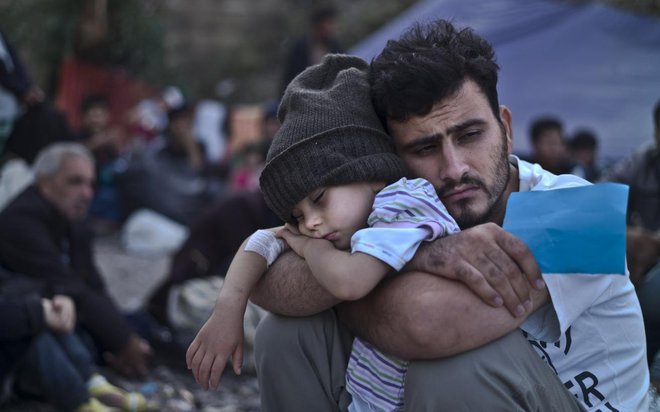 A Syrian refugee child sleeps in his father's arms while waiting at a resting point to board a bus in October, after arriving on a dinghy from the Turkish coast to the northeastern Greek island of Lesbos.
credit - Associated Press // Milwaukee Journal-Sentinel
In November of 1982, Rembert Weakland, archbishop of the Catholic Archdiocese of Milwaukee, gave approval to the city's Catholic parishes to provide sanctuary to Central American refugees fleeing war in their home countries.
In declaring Milwaukee the first Catholic archdiocese in the nation to join the fledgling social justice movement, the archbishop set this state apart in establishing Wisconsin as a haven for those seeking political and spiritual protection in the United States. Joined by clergy and laity from various Protestant churches and Jewish synagogues, Weakland drew upon a centuries-old tradition by which persecuted people could seek respite within the walls of the church.
The actions of Weakland and the thousands of Wisconsinites who joined the Sanctuary Movement in the 1980s stand in stark contrast to Gov. Scott Walker's recent refusal to accept Syrian refugees for resettlement in our state.
Milwaukeeans who declared themselves members of the Sanctuary Movement did so despite the potential for tremendous local and national political backlash. Participants knowingly acted in direct violation of the federal government, which had maintained that the arriving Salvadorans, Nicaraguans and Guatemalans were "economic migrants" rather than refugees protected by the United States' 1980 Refugee Act. Father James Brady, rector at St. John the Evangelist, said religious leaders intended not only to send a direct message to the U.S. government, but also to "give witness" and express solidarity with Central Americans. Drawing upon shared religious beliefs, clergy and laity from across denominations declared that if they were guilty of anything, they were "guilty of the Gospel."
As refugees arrived in parishes throughout Milwaukee, bringing stories of unspeakable suffering, torture and violence, local congregations learned to relate international struggles to their own lives. Sanctuary movement participants were themselves transformed, understanding their religion as a unifying factor that connected the Milwaukee faithful with their persecuted brothers and sisters in Central America.
Rachel Parra, secretary of the parish council of Cristo Rey Catholic Church, considered the actions of Sanctuary workers "to be small and insignificant when compared to the courageous action taken be refugees who were willing to risk...death that their people might live." For the thousands who joined Wisconsin's Sanctuary Movement, it became the people themselves, not the physical church structures, that represented the true sanctuary.
Those who joined drew from their own personal and political wells of faith and moral teaching. For members of the Milwaukee Jewish Council, the plight of Central American refugees recalled memories of the United States' shirked responsibility of helping millions of European Jews fleeing the Holocaust just decades earlier. African-American parishioners at Cross Lutheran Church, which declared itself a sanctuary in 1983, drew parallels between their actions and those of the conductors on the Underground Railroad during the nineteenth century. Regardless of their religious, cultural or ethnic background, all participants deemed it the responsibility of the faith community to offer refuge to all whose lives were in danger, just as the faith community had done through the ages.
Weakland, in recounting his own religious order's medieval practices, noted that the Benedictine tradition was to accept all those who knocked on the door of the monastery seeking shelter and food. No questions were asked and one was to treat each guest as Christ. Like Weakland, Milwaukee's Christians and Jews found common ground in the Old Testament's Book of Leviticus, instructing them not to mistreat the "foreigner residing among you," but treat them "as your native born. Love them as yourself, for you were foreigners in Egypt."
Walker, son of a Baptist minister and an avowed Christian himself, might find within Weakland's teaching and the Sanctuary Movement the moral language to better understand the plight of the thousands of Syrian refugees who currently await some form of sanctuary from Americans.
The governor may frame his recent decision as a matter of state security, and pundits might assess the political ramifications of his announcement. We must, however, understand this decision primarily as a moral one. Will we bear witness to the suffering of thousands of refugees currently fleeing violence and war, or will we allow the inflamed political rhetoric of the day to close our borders and our hearts to those most in need?
[Sergio M. Gonzalez is a doctoral candidate in the Department of History at the University of Wisconsin-Madison. His primary research focuses on the development of Latino communities in urban areas in the American Midwest, with an emphasis on the religious communities Latino immigrants developed in Milwaukee and Wisconsin throughout the 20th century. He is completing a book manuscript titled "Mexicans in Wisconsin" (Wisconsin Historical Society Press).]
Sanders: 'We Will Not Turn Our Backs' on Refugees
By Ben Kamisar
November 16, 2015
The Hill 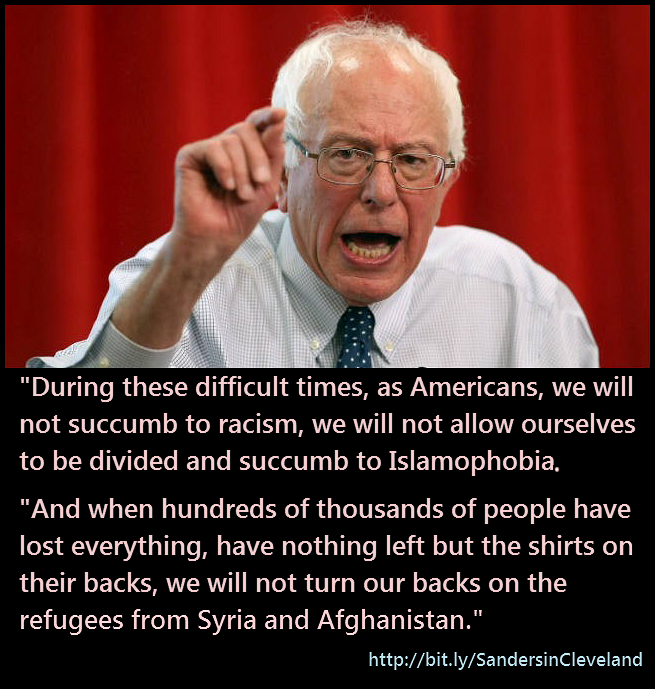 Photo montage by U.S. Labor Against the War
Sen. Bernie Sanders bashed Republican defense hawks who want "perpetual warfare" and reiterated his commitment to accepting thousands of Syrian refugees in a Monday stump speech that uncharacteristically started with a full-throated foreign policy discussion.
"During these difficult times, as Americans, we will not succumb to racism, we will not allow ourselves to be divided and succumb to Islamophobia," Sanders said in Cleveland.
"And when hundreds of thousands of people have lost everything, have nothing left but the shirts on their backs, we will not turn our backs on the refugees from Syria and Afghanistan."
Most GOP presidential candidates, and a handful of Republican governors, have come out against accepting refugees fleeing the Syrian civil war out of fear that terrorists could slip into the country to stage an attack.
Sanders went on to criticize Republican National Committee chairman Reince Priebus, who said in response to the Paris attacks that killed more than 100 people that he's never seen a president "project such weakness on the global stage" like Obama has.
"Back in 2002, we had a president, President [George W.] Bush... We had a president and he was very very tough but not very smart," Sanders said.
"I say to my Republican colleagues, yeah we've got to be tough, but not stupid. Yes, we need to create a worldwide coalition that will defeat ISIS. But no, the United States of America must not be involved in perpetual warfare in the Middle East."
Sanders' campaign has embraced a largely economic message until the Friday night attacks. During Saturday night's debate, while rivals Hillary Clinton and Martin O'Malley both devoted their entire opening remarks to the Paris attacks, Sanders devoted only two sentences before transitioning to his economic message.
Sanders seemed to push back against criticism he received for diverting from the foreign policy message.
"There are those, including many Republicans, some in the media, who think that because of this horrific attack, the only thing we should focus on is defeating ISIS," he said of the Islamic State in Iraq and Syria, which has taken credit for the terror attacks.
"Yes, we will lead the world in defeating ISIS, but at the same time, we will rebuild the disappearing middle class of this country. We are a great nation and we can accomplish both goals."
The Vermont senator's campaign rally also included some implicit digs at Hillary Clinton, who is leading Sanders in national polling as well as in the key early voting state of Iowa.
Nina Turner, the Democratic state representative from Ohio who just switched her endorsement from Clinton to Sanders last week, introduced him at the event. She encouraged supporters not to "listen to the pundits" who say Sanders can't win.
And while rattling off his organization's strength, Sanders nodded at the surge that brought the senator within striking distance of the candidate once seen as the inevitable nominee.
"This country faces some very serious problems," he said, "and the American people are catching on that establishment politics and establishment economics is not going to solve those problems."
Subscribe to Portside