1938-five years after Hitler came to power, after the beginning of the "Final Solution", Jewish refugees were denied entry into the United States. Then it was anti-Semitism and fear of European radicals and communists; today it is anti-Muslim hysteria. Then the U.S. closed its' eyes to the Holocaust; today GOP governors and congressmen are closing the borders while over 250,000 have died in Syria, there are over 3 million refugees and 6.5 million are internally displaced 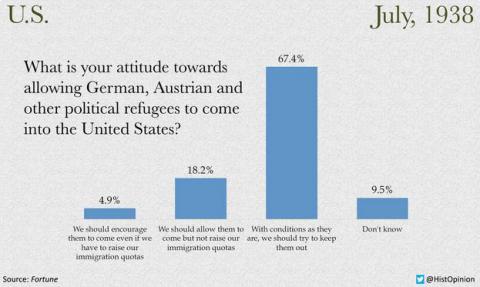 Jul '38: What's your attitude towards allowing German, Austrian & other political refugees to come into the US? , Historical Opinion - @HistOpinion // Washington Post
The results of the poll illustrated above by the useful Twitter account @HistOpinion were published in the pages of Fortune magazine in July 1938. Fewer than 5 percent of Americans surveyed at the time believed that the United States should raise its immigration quotas or encourage political refugees fleeing fascist states in Europe - the vast majority of whom were Jewish - to voyage across the Atlantic. Two-thirds of the respondents agreed with the proposition that "we should try to keep them out."
To be sure, the United States was emerging from the Great Depression, hardly a climate in which ordinary folks would welcome immigrants and economic competition. The events of Kristallnacht - a wave of anti-Jewish pogroms in areas controlled by the Nazis - had yet to take place. And the poll's use of the term "political refugees" could have conjured in the minds of the American public images of communists, anarchists and other perceived ideological threats.
But look at the next chart, also tweeted by @HistOpinion. Two-thirds of Americans polled in January 1939 - well after the events of Kristallnacht - said they would not take in 10,000 German Jewish refugee children. 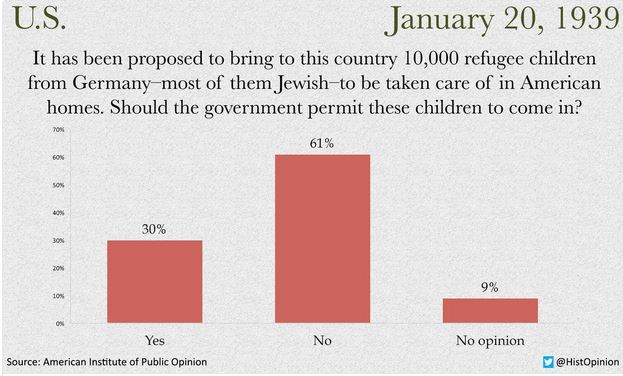 US Jan 20 '39: Should the US government permit 10,000 mostly Jewish refugee children to come in from Germany?
Historical Opinion - @HistOpinion // Washington Post
As WorldViews detailed earlier this year, most Western countries regarded the plight of Jewish refugees with skepticism or unveiled bigotry (and sympathy followed only wider knowledge of the monstrous slaughters of the Holocaust):
No matter the alarming rhetoric of [Adolf] Hitler's fascist state - and the growing acts of violence against Jews and others - popular sentiment in Western Europe and the United States was largely indifferent to the plight of German Jews.
"Of all the groups in the 20th century," write the authors of the 1999 book, "Refugees in the Age of Genocide," "refugees from Nazism are now widely and popularly perceived as 'genuine', but at the time German, Austrian and Czechoslovakian Jews were treated with ambivalence and outright hostility as well as sympathy."
It's worth remembering this mood when thinking about the current moment, in which the United States is once more in the throes of a debate over letting in refugees. Ever since Friday's terror attacks in Paris, the Republicans, led by their presidential candidates, have sounded the alarm over the threat of jihadist infiltration from Syria - even though it now appears that every single identified assailant in the Paris siege was a European national.
The Republicans have signaled their intent to stop Syrian refugee arrivals, or at least accept only non-Muslim Syrians.
GOP presidential candidate Chris Christie of New Jersey was one of the many governors who on Monday said they would oppose settling Syrian refugees in their states; Christie insisted that he would not permit even "3-year-old orphans" entry.
Today's 3-year-old Syrian orphan, it seems, is 1939's German Jewish child.
Of course, there are huge historical and contextual differences between then and now. But, as Post columnist Dana Milbank notes, it's hard to ignore the echoes of the past when faced with the "xenophobic bidding war" of the present:
"This growing cry to turn away people fleeing for their lives brings to mind the SS St. Louis, the ship of Jewish refugees turned away from Florida in 1939," Milbank writes. "It's perhaps the ugliest moment in a primary fight that has been sullied by bigotry from the start. It's no exaggeration to call this un-American."
[Ishaan Tharoor writes about foreign affairs for The Washington Post. He previously was a senior editor at TIME, based first in Hong Kong and later in New York.] 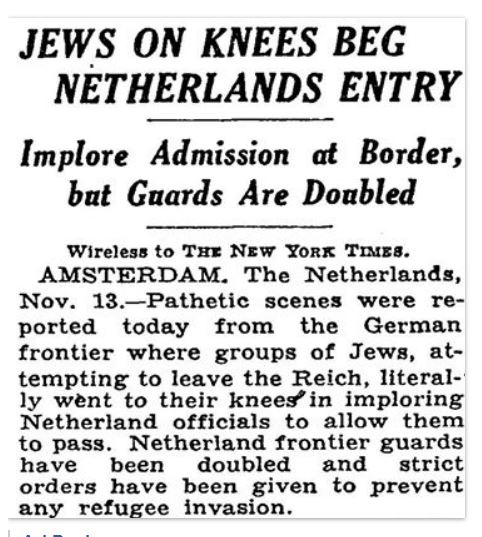 "Obviously no one is planning on committing genocide against Muslims per se, but ISIL has committed what is tantamount to genocide against Yezidi, Christians, Shi'a Muslims and to a great extent other Sunni Muslims, targeting them for not meeting its rigid definition of religious purity. Yezidis, a minority group despised by ISIL, is probably the most clear-cut case of genocide, with even more mass graves coming to light this past week."
U.S. Opinion of Jewish Refugees in 1939 Matches Racial Panic of GOP Governors Over Syrians
By Adam Johnson
November 17, 2015
AlterNet
Subscribe to Portside