The centennial celebration of Joe Hill's execution is being marked by concerts, symposiums, meetings and forums, and the publication of new books, or new editions. Labor historian Paul Buhle reviews two of these. Franklin Rosemont's Joe Hill: The IWW & the Making of a Revolutionary Workingclass Counterculture, with a new introduction by David Roediger; and Philip S. Foner's The Letters of Joe Hill, with new material by Alexis Buss and foreword by Tom Morello. 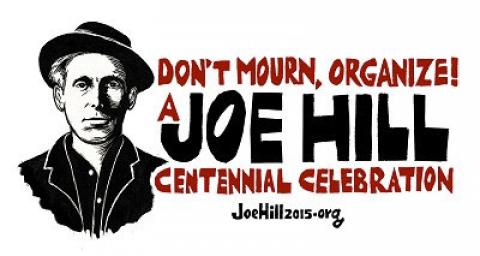 Joe Hill: The IWW & the Making of a Revolutionary Workingclass Counterculture
By Franklin Rosemont, with a new introduction by David Roediger
PM Press, 597 pages
Paperback:   $29.95
December 2015
co-published with the Charles H Kerr Company (Chicago) and Between the Lines Press (Toronto)
ISBN: 978-1-62963-119-6

Whenever Joe Hill disappears, he is likely to turn up again. Like the Industrial Workers of the World (IWW)--whose vision of common people running society remains as vital as ever, and whose mobilization of the poor through songs and humor as well as unionization seems still more relevant-Joe Hill's memory is a keeper. In fact, these two subjects are largely the same because the songster, jokester and organizer combined in himself the modest totality of Wobbly aura. He lived the part and died a martyr, a detail that never hurts in commemorations.

The IWW itself never really recovered as an influential mass movement or a functioning union from the combination of US government repression during the First World War and a split in the remaining ranks in 1924. Younger radicals tended to go into the Communist Party, even if coming out again, disillusioned (or just as likely, bored of frequent and lengthy meetings) all too often. Weakened, the Wobblies retained a lively press, an agitational apparatus and a functioning national office for generations after, reviving from time to time and then going back to a bare-bones operation. The collective memory of their role before 1920, the examples they set in many different ways, have been the subject of every form of art and documentation, including novels, murals, film documentaries and the comics anthology, co-edited by this reviewer, marking the centenary in 2005: Wobblies!

None of these efforts approach the singular impact of one song: "I Dreamed I Saw Joe Hill One Night," composed in Communist-connected summer camp in 1938 by a future screenwriter, and sung most gloriously by Paul Robeson. Endlessly delivered to Popular Front cultural events and union halls     in the 1940s-50s, the song gained new resonance with Joan Baez's version at Woodstock. Like the larger memory of the Wobblies, the song comes back, again and again, a paean to suffering and endurance, if not the famous Wobbly humor. How closely the song related to the real life of the Swedish immigrant born Joel Hagglund in 1879, recruited to the IWW only a few years before his death, in 1910, but renowned for his agitational labor lyrics, remains naturally to be seen.

The centenary of Joe Hill's execution by the state of Utah, in November, 1916, offers another occasion for pondering the hero and his-little understood life. Perhaps it is best to start with the totemic volume written by the leading figure in the Surrealist movement, Franklin Rosemont (1943-2009), because the gargantuan investigation of Hill's occluded life story and the larger argument for Hill's significance are made here, more decisively than anywhere else made or likely ever to be made in historical scholarship. One might rightly call this book Rosemont's own life work, because he met oldtime Wobblies and their friends during his teenage years, in the Chicago of the 1950s early 1960s. Son of a local typographic union leader (who named the boy after newspaperman Benjamin Franklin), he soaked up the atmosphere, just then dissipating, of skidrow didactic intellectuals of the local "hobo university," likewise the working class bohemianism including figures like Nelson Algren and Studs Terkel, and the "Beatnik for President" campaign of 1960 launched from the definitely noninstitutional College of Complexes with its in-house leader, Slim Brundage, who described himself only as "the janitor." This, it is safe to say, was a radical milieu like none other, and among the Wobbly oldtimers and their friends, the Joe Hill memory was held aloft. Every known detail of Hill's life is looked over here, but most memorably for myself, every detail in the legend of Joe Hill mainly takes the stage. Famed regional novelist Walter Stegner gets the worst of Rosemont's saga, almost as bad as the Mormon authorities who executed Joe on a frame-up charge, because Stegner claimed that he had found evidence of Hill as a criminal and the actual guilty party in the robbery-murder. Stegner essentially invented the evidence for his novel, The Preacher and the Slave (1950), but why?  Moving away from a wartime reputation as a contributor to Popular Front magazines and into the new opportunities offered by the Cold War and Red Scare, Stegner was on his way..to becoming the in-house historian of Aramco Saudi Arabia, as well as a Stanford professor and literary icon. A small handful of disappointed Wobblies themselves went rightward, seeking careers through "disillusionment narratives," none with quite this effective degree of venom. But even in the pages of We Shall Be All (1970), labor historian Melvyn Dubofsky's weighty history inspired in part by the mass movements of the 1960s, the Wobblies came off as marginal, near-derelict figures who simply could not fit into society. Not quite fit for organized unions--thus not really the victims of capitalism, exclusion by craft-limited, all white and all male AFL bodies nor of repression-they became victims of their own demographics.

No review can be equal to the richness of Rosemont's Joe Hill, and as David Roediger's introduction suggests, it is best suited to the repeated perusing by readers at every level of historical sophistication. He does not say that the author spends a bit too much time adrift, wandering from Joe Hill-related topic to topic and leaving the reader bemused. But there is no harm in being bemused within a subject as large and symbolic as this one. The Letters of Joe Hill, by contrast, is brief and to the point. A demon researcher aided by his surviving brother, Henry and his nephew, the famed historian Eric, Phil Foner brought to light the packet of correspondence written from the Utah prison. Given how little is ever likely to be known about Joe Hill's personal life and mental framework, these letters are small treasures, to which Foner and his successors have added Hill's own lively if primitive cartoons and many of the song lyrics that made him famous and have kept him famous. Alexis Buss, a recent General Secretary of the IWW, adds useful archival notes, while one of the most prominent singers of Wobbly songs in recent decades, Tom Morello, offers up his personal dedication: Joe is the famed artist's "favorite singer. the poet-laureate of the working class in the early twentieth century." (vii).

Every labor enthusiast has a favorite Joe Hill song, and everyone who relishes a satirical attack upon capitalism will surely enjoy "The Preacher and the Slave," "Nearer My Job to Thee," or "Casey Jones-The Union Scab." It is safe to say that none has been sung quite so often or fervently as "There Is Power in the Union." (Peter K. Siegel and Eli Smith's recent CD with that title has brought it back to life once more, and memorably). The Swedish-American lad Joel Hagglund is going to be around for as long as capitalism makes us all suffer.

[Paul Buhle is an aged labor historian whose many volumes include a history of the US labor bureaucracy, Taking Care of Business.]