"Your staff and others knew that the water in the Flint River was poison -- but you decided that taking over the city and "cutting costs" to "balance the budget" was more important than the people's health." Michael Moore 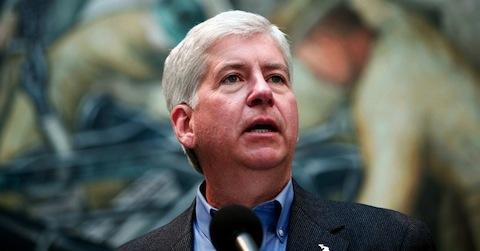 According to the newly-released emails, which were obtained by NBC News, Snyder's chief of staff at the time, Dennis Muchmore, wrote to an unnamed high-level health department staffer: "I'm frustrated by the water issue in Flint."

"These folks are scared and worried about the health impacts and they are basically getting blown off by us (as a state we're just not sympathizing with their plight)," Muchmore wrote in the email, according to journalists Stephanie Gosk, Kevin Monahan, Tim Sandler and Hannah Rappleye.

"I really don't think people are getting the benefit of the doubt," wrote Muchmore. "Now they are concerned and rightfully so about the lead level studies they are receiving."

But it was not until this week that Snyder declared a state of emergency, following in the footsteps of the city's mayor. "The health and welfare of Flint residents is a top priority and we're committed to a coordinated approach with resources from state agencies to address all aspects of this situation," Snyder said on Tuesday.

Following the resignation of Michigan's top environmental official, as well as sustained community demands, the Department of Justice announced this week it is launching an investigation into the water crisis.

Many hold Snyder directly culpable for the emergency itself, and note his role in the Detroit water crisis.

"The source of the Flint Water Crisis leads directly to Gov. Rick Snyder and the fiscal austerity policies that he and his Republican colleagues have been pushing for years on Michigan residents," said Lonnie Scott, executive director of Progress Michigan," in a statement released Thursday. "Families in Flint were forced to drink lead-tainted water while the administration scoffed at their concerns and cries for help. An entire generation of Michiganders now face an uncertain future because of Republican cuts to essential and life-giving services."

The Republican governor appointed Flint emergency manager Darnell Earley who enforced the April 2014 decision to switch from the Detroit system to the Flint River to source water. In an angry letter to Snyder, filmmaker and Flint native Michael Moore wrote:

Your staff and others knew that the water in the Flint River was poison -- but you decided that taking over the city and "cutting costs" to "balance the budget" was more important than the people's health (not to mention their democratic rights to elect their own leaders.) So you cut off the clean, fresh glacial lake water of Lake Huron that the citizens of Flint (including myself) had been drinking for decades and, instead, made them drink water from the industrial cesspool we call the Flint River -- a body of "water" where toxins from a dozen General Motors and DuPont factories have been dumped for over a hundred years. And then you decided to put a chemical in this water to "clean" it -- which only ended up stripping the lead off of Flint's aging water pipes, placing that lead in the water and sending it straight into people's taps.

Moore, in fact, is circulating a petition calling on U.S. Attorney General Loretta Lynch to arrest Snyder for "corruption and assault."

While Flint returned to the Detroit water system in October following public concern, the wide-spread lead poisoning can not be undone. According to the World Health Organization, "Young children are particularly vulnerable to the toxic effects of lead and can suffer profound and permanent adverse health effects, particularly affecting the development of the brain and nervous system."

And there are already signs damage has been done. A study released in September by researchers at the nearby Hurley Children's Hospital identified a "rise in blood lead levels of children less than 5 years old" living within two Flint Zip codes since the city began sourcing drinking water from the Flint River.

In a municipality that is 56 percent black and, according to the latest U.S. Census, one of the poorest cities in the country, community coalitions including "Water You Fighting For" charge that profound injustices lie at the root of the current crisis. As Moore noted, "To poison all the children in an historic American city is no small feat."