Karina Petri, founder of Project Flint, said grassroots organizations like hers are struggling to find a voice for residents who have given up, some of whom have gone back to using the tainted water because they no longer care about the health consequences. 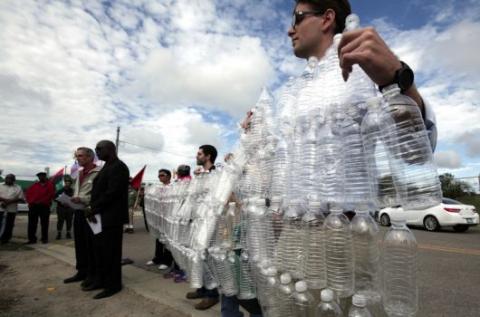 Almost a year after President Obama declared a state of emergency in Flint, the crisis continues to affect people there., Bill Pugliano/Getty Images

There’s a lot of blame to go around and still no clean water in Flint, Michigan, where four more officials were charged Tuesday for their failure to protect people from health hazards caused by contaminated drinking water, bringing the total charged this year to 13.

The charges come as activists in Flint see despair setting in among residents who have lived through the public health nightmare.

Former city executives Howard Croft and Daugherty Johnson were charged with false pretenses and conspiracy to commit false pretenses related to their roles in issuing bonds to pay for a part of the Karegnondi Water Authority (KWA) pipeline project, which would not be possible without the funding, the release stated.

“All too prevalent and very evident during the course of this investigation has been a fixation on finances and balance sheets,” Schuette said in a press conference. “This fixation has cost lives. This fixation came with the expense of protecting the health and safety of Flint. It’s all about numbers over people, money over health.”

A plan due in May will include strategies to improve distribution, enhance water quality, and minimize water main breaks, according to Arcadis, an engineering and design firm contracted by the city in response to concerns by the Environmental Protection Agency and the Michigan Department of Environmental Quality.

Schuette has filed 43 criminal charges in the Flint water investigation, which has conducted interviews with about 200 witnesses.

“The crisis in Flint was a casualty of arrogance, disdain and a failure of management. An absence of accountability. We will proceed to deliver justice and hold those accountable who broke the law,” Schuette said in the release.

While Schuette is bringing charges, the State of Michigan is fighting a judge’s order to deliver water door to door. This is indicative of the “selective justice” Flint is receiving, said Nayyirah Shariff, executive director of Flint Rising, a grassroots organization formed in February to educate residents about the public health crisis.

“We are still using bottled water and paying the highest rates in the country for water we cannot use,” she told Rewire in a phone interview.

The Flint Rising coalition has demanded the government replace all damaged service lines and reimburse water bills dating back to April 2014 until the water is safe. The group also demands health and education services for all.

Flint residents continue to grapple with an issue that some say isn’t just about water in what is one of the poorest cities in the country.

The public health crisis started in April 2014 when Flint switched its water supply from the Detroit water system’s Lake Huron to the Flint River. Regulators failed to ensure proper treatment, exposing 100,000 people—who were overwhelmingly Black with low incomes—to toxic levels of lead in their tap water, which can cause permanent neurological damage in young children.

Almost a year after President Obama declared a state of emergency in Flint, the crisis continues to affect people there.

Many residents will never use tap water again even if the pipes were replaced overnight, said Michael Hood, executive director of Crossing Water, which has provided emergency response services in Flint since January.

“The state has muddied, and I would even say bloodied, the waters to such a degree that residents won’t even let (government) officials on their porches,” he said.

Hood, who has conducted filter checks in the city, estimated that more than half of those who have water filters don’t have them fitted right or working properly. Once the state stops providing free bottled water, Flint residents with low incomes will have to make the choice between buying bottled water and paying for their health care, rent, car payments, and more.

“The long-term psychological impact and economic impact is devastating. You couldn’t ask for a worse scenario,” he said.

Karina Petri, founder of Project Flint, said grassroots organizations like hers are struggling to find a voice for residents who have given up, some of whom have gone back to using the tainted water because they no longer care about the health consequences.

“They are extremely exhausted. Some of them don’t want to wake up in the morning any more but they do because of their children,” she told Rewire. “They don’t believe their lives are worth anything. So it’s important for people like me to keep fighting for them.”

Meanwhile, Congressional Republicans last week quietly ended the year-long investigation into Flint, over the protests of Democrats. Obama signed a $10 billion water infrastructure bill Friday allocating $170 million to address the lead problem there. Flint activists decried the allocation as far too little to address the human costs of the man-made water crisis.

The funding comes late, and it is not nearly enough to address a problem that is far from over. With a new administration in January, Shariff said she fears that Flint will be forgotten, along with any hopes of future funding. Donations have already dried up as Flint has faded from the headlines.

“This is a multi-generational issue,” Shariff said. “If we can’t get Flint right now, there will be many more Flints happening around the country.”

In a recent investigation of lead testing results, Reuters found almost 3,000 areas across the United States with poisoning rates far higher than Flint’s. More than 1,100 of these communities had a rate of elevated blood tests at least four times higher than Flint’s, but have received little attention or funding.

CORRECTION: A previous version of this article misspelled Michael Hood’s last name. In addition, a sentence on how Flint residents “will have to make the choice between buying bottled water and paying for their health care, rent, car payments, and more” has been updated slightly for accuracy. We regret these errors.

Auditi Guha is the race and justice reporter for Rewire. She has uncovered corruption, injustice, discrimination and fielded death threats in her career from India to Boston. She most recently worked at The Standard-Times in New Bedford and was previously a crime reporter for The Cambridge Chronicle and Somerville Journal where she was one of 12 national Guggenheim criminal justice fellows in New York in 2012.