Ossie Davis and Ruby Dee were legendary actors and activists. “Life’s Essentials With Ruby Dee,” a new documentary about their remarkable partnership by their grandson Muta’Ali Muhammad, will premiere on Centric this Sunday. 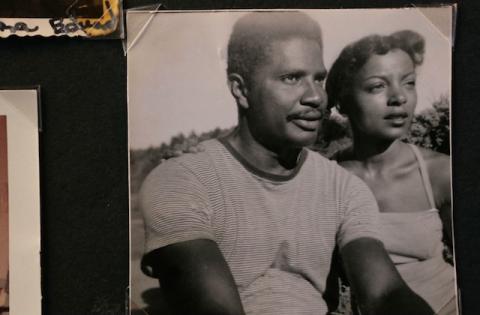 Like their predecessor Paul Robeson and their peer Harry Belafonte, Ruby Dee and Ossie Davis leveraged their fame to make social change. The super couple, who met during rehearsals of the Broadway play "Jeb," spent their lifetimes playing and creating theater, television and film roles that challenged Hollywood's demeaning depictions of Black people. As activists deeply involved with the Civil Rights Movement, they were friends and supporters of Martin Luther King and Malcolm X. Dee emceed the 1963 March on Washington for Jobs and Freedom; Davis delivered Malcolm X's euology. From opposing Sen. Joe McCarthy's Communist witch hunts in the '50s to being arrested while protesting the police killing of Amadou Diallo in the '90s, they were lifetime activists.

Davis died in 2005. Their producer grandson Muta’Ali Muhammad regretted not having a long talk with him before he passed away and decided to make a documentary about Dee while she was still alive. (She died in 2014.) The product is “Life’s Essentials with Ruby Dee,” which premieres on Centric this Sunday. Featuring interviews with actors and contemporaries like Alan Alda, Angela Bassett and Harry Belafonte, the film offers a rare glimpse into the depth of Dee’s commitment to justice and how that manifested in her family life. We spoke with Muhammad about the film’s conception and the ways in which Dee’s and Davis’ careers empowered their activism—oh, andn his grandparents’ FBI files.

Where did the idea for “Life’s Essentials” come from?

It came from a few places. I wanted to make sure that I didn’t repeat the mistake I made before my grandfather passed away. He passed away in 2005, and I regretted not having a serious, one-on-one conversation with him. You let those years go by, and if you don’t seize the moment, those things will never come back. So I did want to tell a story about my grandparents’ lives that accentuated how great they were, but was also honest and personal.

I thought about their dynamic and why I was so attracted to their strengths in different areas, and boiled it down to three areas—love, art and activism. I wanted to have an audience hear what Ossie and Ruby thought about the things we’re facing, without being preachy.

Given how deep this film goes into all aspects of their relationship, did you learn something new about them?

I finally got more details about when they met and got married and I got a look at some of the actual FBI files on them. They were full of information that was striking and disturbing, but that was evidence of how deep their commitment to the community was, even if it wasn’t on the media’s radar. They were doing things fundraising for Angela Davis and writing letters to help people get lawyers in prison.

Well, if I was my grandfather, I’d have a pretty slick way of not answering this question. [Laughs.] Today you might need to take a more nuanced approach. The racism today seems more subversive, and artists need sponsorship. I can’t judge anybody because I don't know what’s going on behind the scenes. And there’s a lot of pain when you get a lot of success where wanting to heal your wounds takes precedence over what you want to do for your people.

You mean in terms of the sacrifices artists have to make for success?

Yeah, like I’m 36 now, so I struggle, struggle, struggle, then finally I’ve got a little bit so I can breathe and go to the doctor, and eat. [Laughs.] So the next thing on my mind is not to risk all of this for my community. I suggested in the film that my grandparents’ love for their children  and how they were raised put family as a priority. And when you put family as a priority, then your community becomes a priority. That fed into their need to repair anything that needed repairing in order to fight for justice.

Was there anything specific about the context of showbusiness or the cultural climate that made that fight for justice more palpable?

This didn’t make the final cut of the film, but what gave them leverage to stick their neck out is they could make a certain amount of a living from performing at churches and schools in Black communities. I don’t know if it’s as easy now to make a living through the communities because the economic disparities are getting larger and the middle class is going away. And that middle class, which was most prominent in the ‘60s, could sustain a group of artists so that they didn't have to rely so heavily on Hollywood. It gave them the power to turn down roles, which gives you power to speak up and not think that you’re going to starve. Nowadays, I don’t know that that base is there, and the economics are so different that the nature of struggle is different.

“Life’s Essentials with Ruby Dee” premieres on Centric TV at 3p.m. EST. It will be available on iTunes, Google Play and Amazon on February 1.