If you’re a woman over the age of 50, finding work has statistically gotten harder since 2008. Economics correspondent Paul Solman sat down with Teresa Ghilarducci, a labor economist and the author of the new book, “How to Retire with Enough Money,”to talk about how age discrimination and assumptions about the worth of women’s labor affect the job and retirement prospects of “older” women workers. 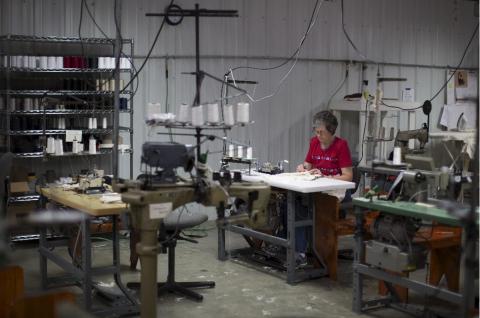 Editor’s Note: If you’re a woman over the age of 50, finding work has statistically gotten harder since 2008.

The Federal Reserve Bank of St. Louis recently published a study that showed that half of the long-term unemployed are now women over 50. So what’s going on?

Economics correspondent Paul Solman sat down with Teresa Ghilarducci, a labor economist and the author of the new book, “How to Retire with Enough Money,”to talk about how age discrimination and assumptions about the worth of women’s labor affect the job and retirement prospects of “older” women workers.

For more on the topic, tune in to tonight’s Making Sen$e segment, which airs every Thursday on the PBS NewsHour. The following text has been edited and condensed for clarity and length.

Paul Solman: What explains discrimination against older women in the workplace?

Teresa Ghilarducci: So this is a really interesting finding, because we’ve all known about age discrimination, but I don’t think any of us thought that men were exempt. The fact that women are the ones that don’t get the jobs when they’re over 50 and looking for work does though, on second thought, make sense.

Paul Solman: Why does it make sense?

Teresa Ghilarducci: Well, a lot of what women do in their lives is punctuated by time outside of the labor market — taking care of family, taking care of children — and women’s labor has always been devalued. So if you have an older woman coming to you and applying for a job, you’re going to think about what kind of experiences she had, what kind of skills she might have. And rightly or wrongly, but probably unfairly, you’re going to assume that she had some time out of the labor market and that she was doing something that was basically worthless, because she wasn’t being paid for it.

The fact that caring labor is devalued in our society is something we’re going to have to confront when more and more people have to be cared for as they get older. But what it does right now is that it hits a woman really, really hard when she’s trying to get hired.

Paul Solman: What’s going through the mind of the employer?

Teresa Ghilarducci: So the employer is thinking, “Alright. I have a job applicant who doesn’t have the experience that I value.” That employer is also probably a man, and he’s living with a woman who he probably didn’t pay to do all that labor for him.

So he’s thinking about his partner, who he probably loves very much, but whose work he probably devalues, and he’s thinking about this job applicant that doesn’t have the experience he can recognize. And we all live, including this employer, in a patriarchal society, and the very definition of patriarchy is that women’s lives, women’s skills, what women are offering up, their potential economic value, is all devalued.

So we all know that women’s economic value is less than men’s. Women are paid less in almost every job. But what’s surprising is that the chances of women getting a job after age 50 are a lot lower than men’s chances of getting a job.

Paul Solman: But so many more women are in executive positions and have become employers, right?

So these audit studies that show that women are discriminated against at the point of hire are mostly of how male employers act. And I’m not so sure that even female employers can view women differently.

Paul Solman: Why not?

Teresa Ghilarducci: Well, if you look at our even basic measurement of economic value, our Gross Domestic Product, women’s labor, or caring labor, is not included if it’s not bought or sold. If caring labor is sold and bought, it’s usually bought by a nursing home or a child care center. And all of those places pay very, very little.

So what women do outside of the market, when it’s valued in the market, is still very low. The next revolution in economic resource allocation is going to be how to pay for things that sustain us, but the people who do this work have had very little economic power. If women would organize as housewives or in unions and if men who do caring labor would also organize, you probably would see the work that they do — that’s not paid for at home — valued more. But when you have a group that’s subordinated in certain kinds of work, that subordinated, lesser-valued person is always going to be disadvantaged.

Look at our fastest growing sector, healthcare. You have minorities at the very bottom of that industry, and you have male administrators of hospitals or top surgeons who are men. In almost every industry, it’s stratified by sex and race. And women are towards the bottom.

Teresa Ghilarducci: Right. Look at women’s labor and how it’s valued in a wrongful death suit. If you hit a male executive and that family sues, the chances are the insurance company’s going to pay out a lot more money than if you hit a mom or if you hit a woman who doesn’t have children.

Why we think the way we do about men, women and work

All the ways that we are oriented towards valuing lives are based on your earning power. If women come to the labor force at a later age and they have spotty work histories, a male or female employer is going to say, “Oh, they had periods of time where they were doing not very valuable work. So the skills and experience they’re bringing me probably aren’t worth very much.”

This age discrimination problem is going to be a bigger problem for women as more and more women are having to work longer because of divorce, or eroded pensions, or lower pensions, because because even if they worked their whole life, they were paid less and thus, accumulated less in their pensions. This age discrimination is actually going to create a population of very low-income and vulnerable elderly. And what’s really depressing about this study is that that women are going to be hurt worse than men.

Paul Solman: And what exactly is going to hurt them worse?

Teresa Ghilarducci: Lower pensions and discrimination in the labor market.

So even though it might be faith-based retirement planning, we always thought that if our 401(k) or our IRA diminished in value — either because we took it out before we retired or the rate of return never panned out — we would always have our human capital to fall back on. So you always hear older people saying, “Well, I’m not really sure when I’m going to retire, I’m going to work a little bit longer,” as if it was their choice that they were going to work a lot longer. People always talk about those work plans as if they can decide. They always forget about the employer part of the equation. You might want to work, but you have to have someone wanting to buy your labor. And this study is showing that older women selling themselves on the marketplace is not as valuable of an asset as men’s human capital.

Paul Solman:  I wouldn’t have thought of a 50-year-old woman as “old.”

Teresa Ghilarducci: Yeah, well, neither do I nor do I think of a 50-year-old man as being old. But it turns out the labor market views people in their mid-40s as old, because when we start to work, we plan on a wage increase. And that’s not a bad plan, at 25 to 30 to 40, you do see people getting wage increases. But this new Federal Reserve Bank study has shown that wages start to decrease after that.

Teresa Ghilarducci: The Federal Reserve study has shown that wages stop increasing at about the age of 45. And so, from 45 to 55, wages decrease by 9 percent. From 55 to 65, another 9 percent. So this age earning profile, where you kind of peak and then it flattens out and falls, that age of peaking is a lot younger than we ever thought. So if you don’t get a raise at your current job at around age 45, you probably will never get a raise.

Now, to get a raise, many people will say, “Well, you’re going to have to go get another job.” But, it turns out, that if you lose your job at 45 to 50, and you go out and get another one, your wage will probably be 20 percent or 25 percent less.

Why women still aren’t making it into the boardroom

That’s one of the reasons why recessions are so hard on older people; you lose your job involuntarily, you go back into the labor market and you’re facing a 25 percent wage decrease.

What I advise people is don’t plan on getting a job with your last job’s wages. Plan on something a little bit less. And that’s really depressing or very challenging, especially if you’re having to save for your retirement. If you wait to save for your retirement when you’re middle-aged, at about 40, you’re going to have to save a much larger percentage of your income than you would’ve, because your income is falling and you’re retirement needs are increasing.

So this data that wages fall after age 45 has been a revolution for financial planners. Financial planners are having to wrestle with this fact and incorporate savings targets for their clients. The fact that you can’t get a job and you have another year or two of unemployment when you’re that age really changes the trajectory for retirement planning.

Paul Solman: But aren’t older people the segment of society with the lowest unemployment rate?

Teresa Ghilarducci: Older people do have a lower unemployment rate than younger people, but you’re forgetting the other part of the labor market, and that’s wages. After about age 45, wages, on average, start to decline.

There’s another thing to keep in mind. So what every labor economist knows — but it still surprises most other people — is that the United States leads the group of rich nations, the Organisation for Economic Co‑operation and Development nations, in the production of low wage jobs. About 25 percent of our jobs pay less than two-thirds of the median wage. That’s about $20,000 dollars a year. We are really, really good at creating jobs that barely make the poverty level for a family.

Paul Solman: And this is compared to which countries?

Teresa Ghilarducci: Well, the usual suspects of having good labor markets is Scandinavia. About 4 percent of Norway’s jobs pay less than two-thirds of the median wage in Norway.

We have a lot of inequality in the United States, and much of that is generated because we create such bad jobs. Jobs that really don’t keep a family of two or three above the poverty level. So we have low unemployment for everybody, including old people, but these are really low wage jobs.