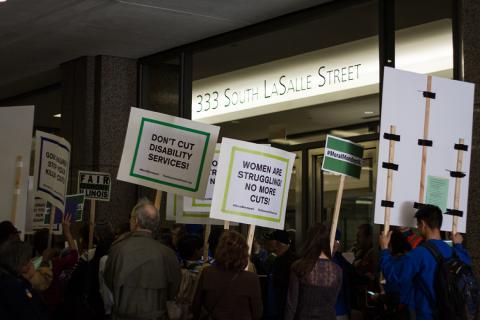 Activists protesting Gov. Bruce Rauner's proposed budget blocked the entrance to the Board of Trade on Nov. 2, 2015., Stacy Rupolo

While the state’s budget impasse is holding up funds for everyone from college students to domestic violence victims, Illinois continues to pay banks millions of dollars every month for complex borrowing deals that other local governments have challenged in court, according to a new report.

The state is currently paying $6 million a month for 19 interest rate swaps, according to the report from ReFund America Project. The swaps were sold as a way to save money by protecting taxpayers from rising interest rates. Illinois has paid over $600 million for the deals and could pay $1.45 billion for them before they are ended.

“There’s no money going to emergency services, nothing going to rape counseling or homeless services," said Nathan Ryan of Grassroots Collaborative, which endorsed the report. "But the checks are going out on time, in full, twice a month to these banks for these swaps.”

The report comes just as Chicago hits the pause button on buying out its remaining interest rate swaps. Many of them had termination penalties amounting to hundreds of millions of dollars, triggered when the city’s credit rating dropped to junk status. According to ReFund America, the state could be on the hook for $124 million in penalties by the end of the year if (as expected) its credit rating continues to drop.

Gov. Bruce Rauner’s office has said they are exploring options for negotiating settlements on the deals. The state and city should follow the lead of other local governments and take a more aggressive legal posture, said Saqib Bhatti, co-author of the report.

Last week Mayor Rahm Emanuel's administration scaled back a multi-billion-dollar borrowing proposal before the City Council, eliminating a $200-million bond sale to buy out the last interest rate swap in its portfolio, after the Progressive Caucus questioned the maneuver and requested more information.

To date Chicago has paid or authorized $296 million in termination penalties, on top of a half-billion dollars in swap payments through 2015, according to ReFund America. The $200 million bond that was proposed and postponed would have financed a swap penalty of $106 million over 30 years.

The aldermen requested a copy of the law department’s review of the swaps, which concluded the city has no legal recourse. Ald. John Arena (45th Ward) said the aldermen are looking at the review and may “ask the legal department to go further," including exploring the experiences of cities that have sued banks, alleging that the swap deals were fraudulent.

The law department’s review discusses one such case: An arbiter awarded an Alabama sewer utility, which charged that banks had misrepresented the terms of a swap deal. The memo argues that the case isn’t relevant to Chicago’s swaps. According to ReFund America, at least eight small local government bodies have successfully challenged swap deals in court, some winning full refunds, and Houston and Reno have legal claims that are in process. (The Chicago Tribune has reported on some of these cases.)

Two other cases involving big cities are of particular interest. In 2012 Baltimore filed a class action lawsuit against JPMorgan, Citigroup, Bank of America, and others charging that their artificial manipulation of Libor – a benchmark interest rate that was used in many of Chicago’s swaps – robbed their clients of millions of dollars in returns on investments such as interest rate swaps. In 2013, Philadelphia filed a similar suit.

The banks being sued by Baltimore and Philadelphia include those that sold big swaps to Chicago and Illinois. The lawsuits are fallout from the still unfolding Libor-rigging scandal, in which some big banks are accused of misrepresenting interest rates to profit from trades. With a half-trillion worth of state and local interest rate swaps on the books in the United States before the financial crisis, the artificial lowering of Libor by banks in collusion with each other is estimated to have cost municipalities at least $6 billion.

Overall, it’s a striking illustration of the brutal efficiency of the big banks at extracting every possible ounce of profit. Through recklessness and fraud, they crashed the economy, costing millions of people their jobs and their homes. For this they were rewarded with a trillion-dollar government bailout. Then, as cities and states struggled with the fallout from the crisis, slashing services to their most needy residents, the banks picked their pockets to pull out an additional few billion, just because they could.

The Chicago Reporter is a nonprofit investigative news organization that focuses on race, poverty and income inequality. The Reporter was founded by civil rights activist John McDermott in 1972 to measure the city's progress toward racial equality.  You can donate here.