BDS is Not Anti-Semitic - Solidarity with UAW Local 2865

UAW Local 2865 took a brave stand for BDS -- but their decision was undemocratically overturned by the UAW International Executive Board. Help us send a strong message - that Jews and allies around the world stand for BDS, and with Local 2865. BDS - a time-honored, non-violent form of political protest, supported by millions around the world. The labor movement stood in solidarity with the people of South Africa, Local 2865 has bravely stood with the people of Palestine.

.,UAW
I was the Political Director of the AFL-CIO (the largest federation of unions in the U.S.) for 8 years. But long-before I worked for the AFL-CIO, one of my first jobs in the labor movement was with the United Auto Workers, one of America's biggest and best unions. I'm so proud of the work we did at the UAW, fighting for better pay and conditions for workers. But today, I'm incredibly disappointed in the leadership of the UAW.
Here's why:
In December 2014, rank-and-file members of Local 2865 of the United Auto Workers (they represent over 14,000 teaching assistants and other workers at the Universities of California) voted to support boycott, divestment, and sanctions (BDS) of Israel. With their vote, they honored the call of Palestinian civil society, and joined millions of people the world over who are taking non-violent action to protest Israel's human rights abuses.
But then their vote was undemocratically overturned by the International Executive Board of the UAW, the highest body of their union. That decision is now heading to an impartial review board, who'll have the final say.
I've been speaking to members of Local 2865 all week, and they need our help: they need us to show UAW leaders and the review board that there are people all over the world - Jews and allies - who stand with them in support of BDS. 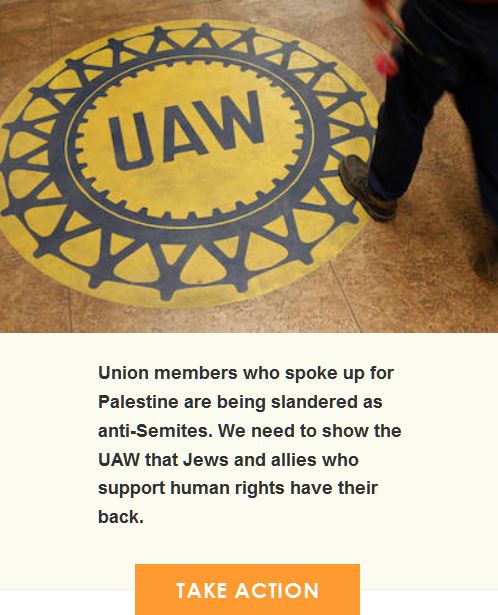 -
Click here to sign our open letter in support of UAW Local 2865's brave vote for BDS -- and add a personal message too.
There's no suggestion (really, none at all) that there were any problems with the vote that Local 2865 took. In fact, it was supported overwhelmingly, by over two thirds of those who voted - more people than voted in the union's contract ratification! But the defenders of Israel's racist policies couldn't accept defeat, and they've been fighting dirty.
Working with a corporate law firm, a small group of anti-BDS union members petitioned the International Executive Board to overturn the democratic vote. They tried to claim that the vote had been unfair, or compromised - but there was no evidence whatsoever for that. So they resorted to the oldest trick in the book: false charges of anti-Semitism.
Let me be absolutely clear: anti-Semitism is real, and we need to fight it. But slandering those of us who speak out against Israel's human rights abuses doesn't help the fight against prejudice. As Jews and allies, we need to stand up proudly and declare: criticising Israel is not anti-Semitic. Boycotting Israel is not anti-Semitic.
Send a message of support to UAW Local 2865. It might not seem like much, but a quick message will make a big difference to rebutting the claims of our opponents.
Support from the labor movement played a vital role in bringing down South African apartheid, and UAW Local 2865 is following in those footsteps. But now, they're having their name dragged through the mud for daring to speak out against the crimes that Israel commits. Their union is being slandered as anti-Semitic, and as Jews and allies committed to justice, we must not let it stand.
I'm Jewish. I support BDS. I support Local 2865. If you stand with me, sign our letter of support.
Thank you for all that you do,
Karen 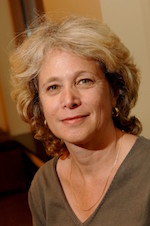 Karen Ackerman
Board Member, JVP
Jewish Voice for Peace is a national membership organization inspired by Jewish tradition to work for the freedom, equality, and dignity of all the people of Israel and Palestine. Become a JVP Member today.
Jewish Voice for Peace
1611 Telegraph Ave. Suite 1020 Oakland, CA 94612
(510) 465 1777
Subscribe to Portside