The Bernie generation is our political future, joining with groups demanding living wages or $15/hr, Black Lives Matter, the Dreamers, and 350.org. With their roots in the Occupy movement, they are viscerally mad at the rigged economy based on McJobs and the monopoly power of the plutocrats.This is such an important election, the riskiest of my lifetime. If we win, then we can resume our quarrels and patient work for peace and justice.

January 28, 2016 Tom Hayden The Peace & Justice Resource Center
Printer friendly
There is No Doubt that the Bernie Generation Is Our Political Future Published January 28, 2016 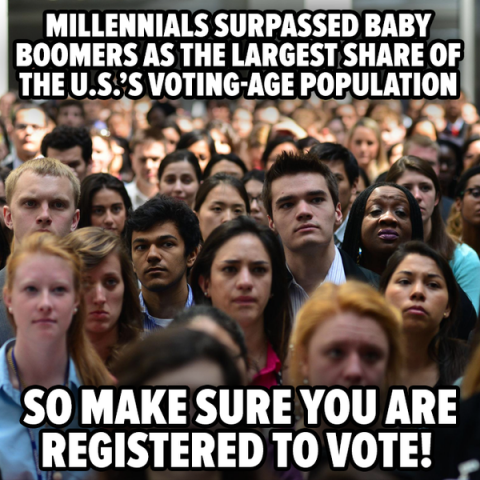 Millennial Voters - Will They Feel the Bern?, .
"Somebody's Got to Tell It!"- Jack Newfield, 2002
On the Inevitability of Risk
Support the spirit and future of the Bernie generation. That's imperative no matter which candidate you vote for in the primary. His progress has been amazing since the early moment when I welcomed him at a kickoff rally in LA. The Sanders campaign will have a deep lasting impact on social movements, younger progressive Democrats, local elections and presidential politics far into the future. Hopefully it will turn the "progressive wing of the Democratic Party" into a real force ahead.
If Bernie wins in Iowa and New Hampshire, which is very possible, the climb gets tougher and the arguments may become more intense. His movement will overflow with accelerating joy, Like the winter of 1967 when student volunteers tromped through blizzards to get Eugene McCarthy over 40 percent of the vote, and helped force LBJ to resign. Or like Jesse Jackson's primary campaign in 1988 which led to the Rainbow Coalition. The real model for changing the system from within was Senator Barack Obama's win in Iowa in 2008, powered by voters not unlike those about to caucus in a few days.
There is no doubt that the Bernie generation is our political future, joining with groups demanding living wages or $15/hr, Black Lives Matter, the Dreamers, and 350.org. With their roots in the Occupy movement, they are viscerally mad at the rigged economy based on McJobs and the monopoly power of the plutocrats. They want a lifting of student debt and lowering of tuition, the expansion of health care. 80% of millennials demand a transition to clean energy and renewables by 2030. 82% want background checks on all gun purchases. They want Citizens United repealed and secret money unmasked. Bernie has raised an astounding $41 million dollars, 74 percent in small individual contributions.
After Iowa and New Hampshire Bernie will have to rush far and wide in search of Black and Latino voters. Perhaps he is hoping that these voters will come to his side in a tide similar to Obama's after 2008, when black voters supported Hillary until Obama proved he could win votes in all-white Iowa. If they think Bernie is electable, black voters may shift. It's a high-risk gamble, but this election is all about risk. Many are holding off a final endorsement until the African American vote rolls in from South Carolina and the Latino vote from Nevada.
There's nothing more dangerous than losing all branches of government to the cult of right-wing Republicans. That's why many are for the Democratic ticket in November.
If there's not a sudden shift to Bernie, if the primaries grind on, the Bernie-Hillary split will become more rancorous at every level. The work of conflict resolution between the two camps will become complicated. Bernie's present margin over Trump may or may not shrink. Many incumbent Democrats will panic over being on the same ticket with a Democratic Socialist.
Hillary has slipped from a strong 25-point margin to only 13-15 percent among national Democrats. She should do well in coming primary states where there are large black, Latino, and multi-cultural populations. But Bernie's movement will still be everywhere.
If Bernie does slip against Hillary, as the punditry predicts, his movement will remain essential to a Democratic win in November. Hillary can't just make a traditional deal with Bernie in order to win his legions over, but will have to conduct her campaign with great respect for her rival and for the positions he takes on Wall Street and Citizens United. Bernie will have to lead his supporters into an alliance with their nemesis, Hillary and the traditional Democratic Party. Assuming a close November election settled by less than four points, Bernie supporters will be the difference.

We cannot risk another electoral loss, whether stolen or otherwise, but where lies the greater risk? That is exactly what Democrats and Independents are pondering and fretting over these days. It's the finger-biting moment when tempers fray, hyperbole mounts, and passions flare.