Vámonos! An Unprecedented Latino Voter Drive Could Tip the Scales in Iowa

A grassroots organizing effort may bring out between 10,000 and 20,000 Latinos to caucus in Iowa on Monday, and Bernie Sanders may be the beneficiary. 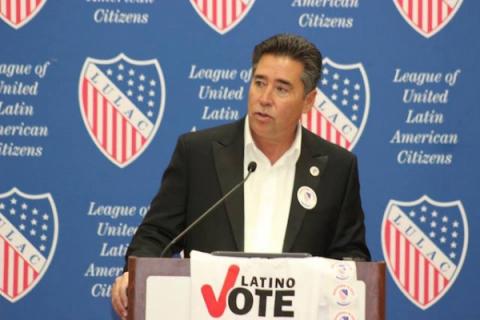 Across Iowa, thousands of Latino voters are getting the same call. "It is important the Latino community participate in the presidential caucuses," a young Latina woman says on the robocall. "If we don't participate in the Iowa caucuses, then everyone else gets to decide for us what issues are important and which candidates will address those issues."

A total of 50,000 Latino voters are receiving direct mailings bearing similar messages, and 25,000 are receiving robo and live calls encouraging them to caucus on February 1. For those living in the 20 Iowa counties with the highest concentration of Latino voters, they are getting knocks on their door and caucus training opportunities in their communities. It's all part of an ambitious effort to organize Iowa's Latino population into an influential voting block in the caucuses next month. "People will be surprised," predicts Joe Henry, the man spearheading the effort. "I think you're going to see a little history here."

Henry's plan is the first time that there has been a targeted effort to engage Latino voters in the Iowa caucuses. If the majority of those who turn out caucus for a Democrat, the effort could help decide the tight race between Hillary Clinton and Bernie Sanders—and thanks to the large number of young people in the Latino community, Sanders may reap the benefits.

Henry, a real estate agent with decades of political organizing under his belt, met Mother Jones in downtown Des Moines at Ritual Café, a Latina-owned coffee house that only sells vegetarian and vegan fare. There's a Bernie Sanders sign posted in the window and a stack of "FeelTheBern" and "Bernie2016" bumper stickers inside, along with the latest edition of Hola Iowa, a local paper that prints stories side by side in both English and Spanish. The Vermont senator, who gave an exclusive interview to the paper, graces the cover.

A year ago, Henry began shopping a plan to engage and turn out Iowa's Latino voters in the Iowa caucuses. A board member of the League of United Latin American Citizens (LULAC), the oldest civil rights organization for Latinos in the United States, Henry says he spent months going to major, national Latino organizations looking for funding. LULAC is a nonpartisan organization and is training Latinos how to navigate both the Democratic and Republican caucus processes. The organization reached out to the campaigns of Marco Rubio, Ted Cruz, and Jeb Bush to partner on caucus training—only the Bush campaign responded and joined forces with LULAC to host training sessions. But Henry's efforts were successful in Iowa. Eventually, he was able to bring in enough donations that LULAC put $300,000 into his plan. Starting in October, he began to organize.

LULAC's Iowa team has identified about 50,000 registered Latino voters in the state—and they are targeting them with a message that is repeated in robocalls and mailers: If you don't participate, someone else will. "There's a little bit of guilt instilled into that" message, says Henry. "Many of us have that Catholic upbringing—guilt definitely works in many Latino families to get people engaged in the process."

Henry believes LULAC's effort will bring out between 10,000 and 20,000 people to caucus on Monday. The majority of these voters will likely participate in the tight race between Sanders and Clinton. Though Clinton is the preferred candidate among Latino voters—a national poll from NBC this month showed her leading 54 percent to Sanders' 33 percent—Henry's effort may ultimately result in more voters for Sanders than Clinton. That's because Iowa's Latino population is overwhelmingly young. And in Iowa, Sanders is massively overperforming among younger voters. Of the 50,000 Latino voters that LULAC identified, Henry says 60 percent are under 35 years old. And Henry's observation is that younger Latinos in Iowa are drawn to Sanders' economic message while older Latinos, who have been familiar with Clinton for decades, remain loyal to her.

"It's a small population, but it's skewed toward a young population," says Henry. The latest census data puts Iowa's Latino population at just 5.6 percent—few states are whiter than Iowa. But the median age of Iowa's Latinos is just 22 years old. Des Moines public schools, says Henry, are 27 percent Latino. LULAC has worked with Des Moines high schools to conduct caucus training in senior government classes so that high school seniors who will be 18 on Election Day in November know how to caucus.

"We have young people coming of age every year now, turning 18, getting registered to vote," Henry says. "We are reaching a significant point in time where we have enough registered voters where we can participate in the caucuses in a significant way. Never before have we been able to do this."

Henry is driven by what he sees as a special moment for political activism among young Hispanics. The most visible incarnation of this activism nationally has come from Dreamers—young undocumented immigrants brought to the United States as children who are pushing for legal status in state capitals and in Washington. It probably doesn't hurt that Congress's most prominent opponent of pro-immigrant legislation, GOP Rep. Steve King, hails from Iowa. Henry wants to seize this moment and make sure that young Latinos remain engaged politically. "These young people—I haven't seen this since I was a kid from the 1960s and 1970s, this kind of activism," says Henry. He wants to capitalize on this engagement and make it a lifelong habit.

After Monday's caucuses, even though the money for Henry's project will run out, he plans to use the voter data and volunteers he organized to mobilize Hispanics in the general election in Iowa—a swing state. And if he is successful in turning out a significant number of Latinos for the caucuses, he hopes his effort will become a template for activating Latino voters in states across the country. But first, he has to get Latinos to caucus—an hours-long, detailed, and even intimidating process in which caucus-goers form groups based on their favorite candidate, advocate for that candidate, and then often regroup before finally allotting delegates from their precinct.

LULAC's caucus training sessions around Iowa, Henry says, begin with the following instructions: "You're going to be there for two hours, so be prepared. And you've got to be there by 7 because the doors will be locked right at 7 p.m." The training stresses the history of the Latino community in Iowa and the importance of each participant in the process. "You’re the change agents, so you need to stay there," is the message. Then the trainings, many of them taking place in high schools, go through a mock caucus. If the voters find the procedure easy to understand, the training is over. If they say it was hard, then they do it again.

Pema Levy is a reporter in Mother Jones' DC bureau. E-mail her at plevy [at] motherjones [dot] com. RSS | TWITTER