When President Obama appointed Dollie Gee to the U.S. District Court in 2010, he undoubtedly didn't expect her to mount a frontal challenge to his administration's detention and deportation policies. But five years after her elevation as the first Chinese American woman on the federal bench, Gee ruled last summer that holding Central American women and children in private detention lockups was illegal. 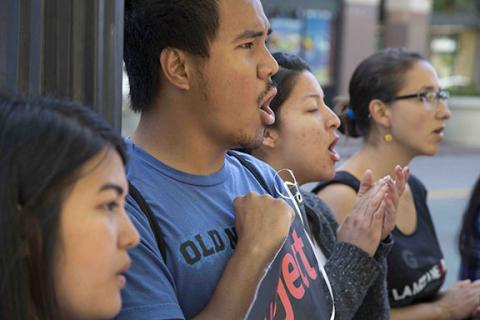 Ending detentions and mass deportations will require political courage and action from whoever is elected-more than just a campaign promise. But as important as that action is, it will still not reach the roots of this current forced migration. Those roots lie in a history of military intervention on the side of wealthy elites, trade policies intended to benefit U.S. investors, and decades of deportations that have separated families. Getting at the roots means changing those basic policies. Those who want change have their work cut out for them-organizing a movement that can make the next president willing to accept the challenge.

David Bacon is a California writer and documentary photographer. A former union organizer, today he documents labor, the global economy, war and migration, and the struggle for human rights. His latest book, The Right to Stay Home (Beacon Press, 2013). discusses alternatives to forced migration and the criminalization of migrants.