Art as politics in the powerful new exhibit at the Whitney Museum in New York by Laura Poitras. Museum director Adam Weinberg sets the show "in the tradition of socially and politically engaged artists - progressive artists such as Ben Shahn and Alice Neal." He said, "The aim of the projections is to provoke moral and ethical responses." Indeed, they do. Or they should. 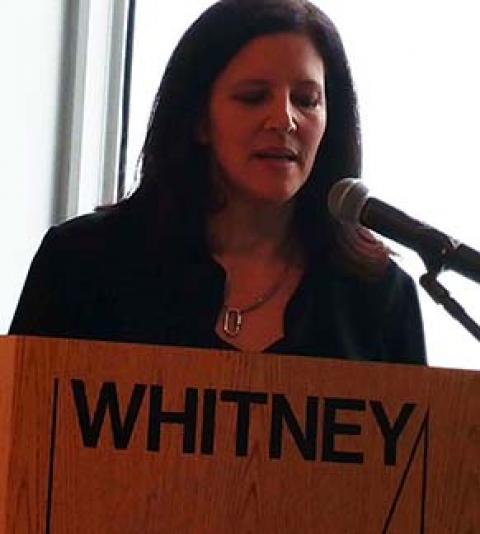 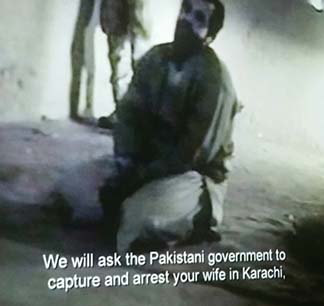 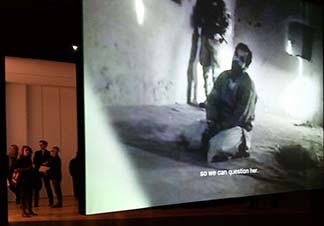 "So we can question her." Museum visitors are at the side, viewing the reverse screen.
photo Lucy Komisar
The video was obtained as evidence in the U.S. court case. Hamdan and his brother-in-law were the subjects of Potras' documentary, "The Oath," in 2010.
The reverse screen shows people disturbed at what they have seen.
The reverse of the screen show stunned "viewers" and their reactions. In fact, ironically, they are viewing ground zero after the 9/11 attack. Still opposite sides of the same screen.
There is involvement by museum-goers, witting and not. People are invited to lie on a platform in a dark room and look up to gaze at what they might see from the courtyards of homes in Yemen, Somalia, and Pakistan. 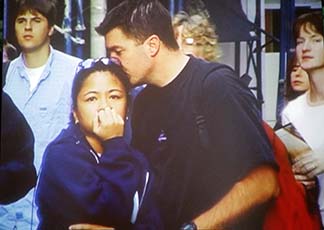 The reverse screen shows people disturbed at what they have seen.
photo Lucy Komisar
And in the other room, we see those - our - bodies as multi-color drone targets. 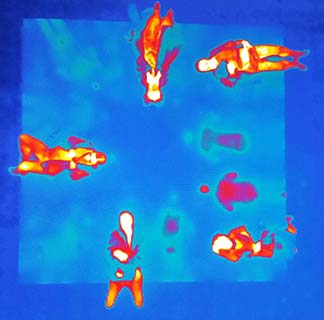 Museum visitors as drone targets.
photo Lucy Komisar
In a dark twisting room, providing a vision of the secretive Deep State, exhibits of documents, drawings and videos are seen through voyeuristic peepholes that offer only partial views.
There's a 2002 memo from CIA Director George Tenet on increasing the agency's cooperation with the NSA. 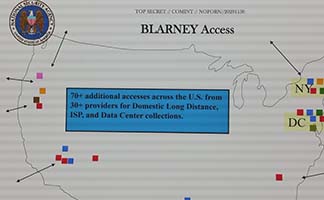 Access across the U.S. for phone and data collection.
photo Lucy Komisar.
Also cell phone footage of casualties from a Sept 2012 U.S. airstrike in Yemen.
And a prisoner's line drawings of implements of torture at a secret CIA detention sites in Afghanistan.
A home video presents two days in a town in Yemen. The first shows a wedding, the second the results of a U.S. drone strike, taken by a man whose brother-in-law and nephew were killed in the strike.
And then, for the visitors who have cell phones, in case they think this exhibit is about "others," a monitor showing the wi-fi signals coming from those phones via Wi-Fi Snifter software by Surya Mattu.
Poitras, who had been living in Berlin as a result of U.S. government harassment when she entered or left the country, returned to New York to prepare the show. After "Citizen Four," her profile is so strong that she can cross the American border with the same freedom as most citizens.
Museum director Adam Weinberg sets the show "in the tradition of socially and politically engaged artists.progressive artists such as Ben Shahn and Alice Neal." He said, "The aim of the projections is to provoke moral and ethical responses." Indeed, they do. Or they should.
"Astro Noise," by Laura Poitras. Whitney Museum of Art, http://whitney.org/ 99 Gansevoort Street, New York City, bet Washington St. & 11th Ave. Daily except Tues. Opens 10:30 am. Under 18 free. Students/seniors $18. Adults $22. On Fridays, 7-10 pm, admission is pay-what-you-wish.
[Lucy Komisar writes about plays and New York City cultural exhibits from a political point of view. As an investigative journalist, she focuses on financial and corporate corruption and offshore bank and corporate secrecy.]
Subscribe to Portside