Spike Lee endorsed the Vermont senator on Tuesday. He is the latest in a series of black intellectual heavy-weights to have come out in support of him. 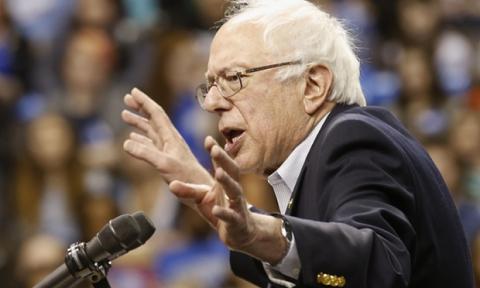 Bernie Sanders’ revolution is appealing to those who want the system to change., Steve Helber/AP
Spike Lee is the latest black public intellectual to endorse Bernie Sanders and to question the sanity of black voters and politicians pledging their allegiance to the Clintons, who have done as much harm to black America as any living political couple. I’ve said it before and I’ll say it again: I am mystified by robust black support for Bill and Hillary Clinton.
Spike Lee’s Do the Right Thing helped me wake up about race in America when I first watched it as a teenager. That’s why I was delighted to read that Spike Lee encouraged South Carolina democrats to “wake up” in a radio ad on Tuesday and to vote for “Brother Bernie”.
Bill Clinton governed through playing to white fears by hurting, locking up or even executing black Americans. He left the campaign trail in 1992 to oversee the execution of Ricky Ray Rector, a black man so mentally incapacitated, he reportedly did not eat the dessert from his final meal because he was “saving it for later”. When in office, Bill Clinton ended welfare for poor children and destroyed countless black families through a crime bill even he now admits made mass incarceration worse, while Hillary Clinton would go out and whip up support for this accelerated disenfranchisement and marginalization of black America, even when it meant referring to children as “superpredators”.
The case against Clintonian neoliberalism is compelling. I am glad to see black thinkers making a case for Sanders’ democratic socialism and its potential to address structural racism as an alternative. If anyone is smart enough to effectively make Sanders’ case to black America, it would be the intellectual leaders who have endorsed him thus far.
Take Spike Lee. He is one of the contemporary black geniuses who have helped the nation (and me personally) reconsider race in transformative ways – and the latest to be feeling the Bern. Or Cornel West, who has been stumping for “Brother Bernie” for months. Just as I understood race differently after watching Crooklyn and Jungle Fever, I grew to understand black liberation theology and the radical potential of Christianity by reading West’s books – his influence been immeasurable. And, like much of America, I learned how to better think about the case for reparations after Ta-Nehisi Coates made it in the Atlantic. That’s why it matters so much that he said he would vote for Sanders.
Similarly, much of the country first got woke about the scale and racism of mass incarceration when they read Michelle Alexander’s The New Jim Crow. Alexander has not endorsed Sanders or any candidate – “I endorse the revolution” she wrote – but she has offered the most skewering critique on why “Hillary Clinton doesn’t deserve the black vote” in the Nation. She has also reminded black voters that “we are not checkmated” – that we can approach politics with a sense of possibility.
No one speaks for “the black community” or the mythical “black voter”. But the Black Lives Matter movement has upped the level of discourse and critique in racial politics. So, it’s fantastic to see such serious black minds from American film, letters and academia making their cases in public with insight and heft. And, given their decades of deep intellectual work on race (along with Sanders’ commitment to universal public college tuition and healthcare and his aversion to Wall Street and private prisons), their cases for Sanders are sound.
Much less intellectually sound are the arguments of Clinton’s black surrogates. When she was endorsed by the corporate-funded Super Pac of the Congressional Black Caucus (not by the CBC itself or by its members), the only reason seemed to be political expediency. The black members of congress seemed intent on maintaining their relationship within the Clinton power structure, no matter how deeply invested it may be in white supremacy. Like Clinton, much of the CBC is beholden to Wall Street. So Sanders – with no connection to Wall Street or to a global foundation ripe for harvesting political chits – offers CBC members little possibility of power except by way of his gamble for the White House.
To me, Sanders is not only appealing because he marched with Martin Luther King Jr or was arrested fighting racism (though I like the idea of a president who has been arrested for social justice). Sanders is most interesting because he offers black Americans a real possibility for change, thanks to his willingness to genuinely critique capitalism. You don’t get to take millions in speaking fees over the years as Hillary Clinton has done – much of it from banks – and get to critique capitalism.
This critique is not without specific implications for black Americans. Malcolm X infamously said: “You can’t have capitalism without racism.” The Clinton machine is the friend of unfettered capitalism, which makes them the friend of racial capitalism, too. Sanders and his dreams of democratic socialism are the enemy of cowboy capitalism – and the racist system in enables.
This is just one of the many intellectual arguments to be made in his favor. As more black geniuses feel the Bern, our arsenal of arguments in favor of the revolution will only grow. For those of us longing for change, they could not have spoken out at a better time.
Steven W Thrasher is writer-at-large for Guardian US. He was named Journalist of the Year 2012 by the National Lesbian and Gay Journalists Association. His work has appeared in the New York Times, the Village Voice, Rolling Stone, BuzzFeed, the Advocate and more. Follow him on Twitter at @thrasherxy or visit his website.