Overthrowing Dilma Rousseff - It's Class War, and Their Class is Winning

The judicial coup against President Dilma Rousseff is the culmination of the deepest political crisis in Brazil for 50 years. Dilma's second victory sparked a heated panic among the neoliberal and U.S.-aligned opposition. The fourth consecutive election of a President affiliated to the centre-left PT (Workers' Party) was bad news for the opposition, because it suggested that PT founder Lu¡s In cio Lula da Silva could return in 2018. 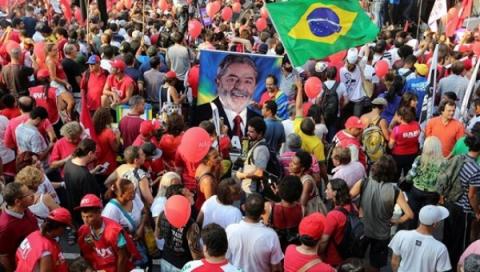 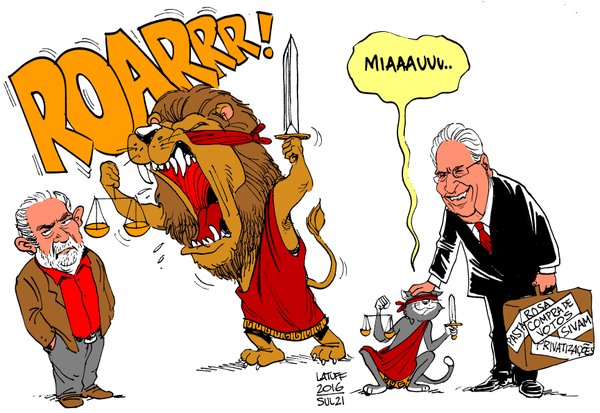 credit - Carlos Latuff
The Coup
Why is this a coup? Because despite aggressive scrutiny, no Presidential crime warranting an impeachment has emerged. Nevertheless, the political right has thrown the kitchen sink at Dilma Rousseff. They rejected the outcome of the 2014 elections and appealed against her alleged campaign finance violations, which would remove from power both Dilma and the Vice-President - now, chief conspirator - Michel Temer (strangely enough, his case has been parked). The right simultaneously started impeachment procedures in Congress. The media has attacked the government viciously for years, the neoliberal economists plead for a new administration to `restore market confidence', and the right will resort to street violence if it becomes necessary. Finally, the judicial charade against the PT has broken all the rules of legality, yet it is cheered on by the media, the right and even by Supreme Court Justices.
Yet... the coup de grƒce is taking a long time coming. In the olden days, the military would have already moved in. Today, the Brazilian military are defined more by their nationalism (a danger to the neoliberal onslaught) than by their right-wing faith and, anyway, the Soviet Union is no more. Under neoliberalism, coups d',tat must follow legal niceties, as was shown in Honduras, in 2009, and in Paraguay, in 2012.
Brazil is likely to join their company, but not just now: large sections of capital want to restore the hegemony of neoliberalism; those who once supported the PT's national development strategy have fallen into line; the media is howling so loudly it has become impossible to think clearly, and most of the upper middle class has descended into a fascist hatred for the PT, the left, the poor, and the black. Their disorderly hatred has become so intense that even PSDB politicians are booed in anti-government demonstrations. And, despite the relentless attack, the left remains reasonably strong, as was demonstrated on 18th March. The right and the elite are powerful and ruthless - but they are also afraid of the consequences of their own daring.
There is no simple resolution to the political, economic and social crises in Brazil. Dilma Rousseff has lost political support and the confidence of capital, and she is likely to be removed from office in the coming days. However, attempts to imprison Lula could have unpredictable implications and, even if Dilma and Lula are struck off the political map, a renewed neoliberal hegemony cannot automatically restore political stability or economic growth, or secure the social prominence that the upper middle class craves. Despite strong media support for the impending coup, the PT, other left parties and many radical social movements remain strong. Further escalation is inevitable. Watch this space.
[Alfredo Saad Filho is Professor of Political Economy at the SOAS Department of Development Studies. His research interests include the political economy of neoliberalism, industrial policy, alternative macroeconomic policies, and the labour theory of value and its applications.
Carlos Latuff https://latuffcartoons.wordpress.com/ is Brazilian cartoonist who doesn't mince words or hold back on stirring up people, in his country and across continents.]
Subscribe to Portside