The Rapid and city engaged in “Witch-Hunt” to silence students, workers 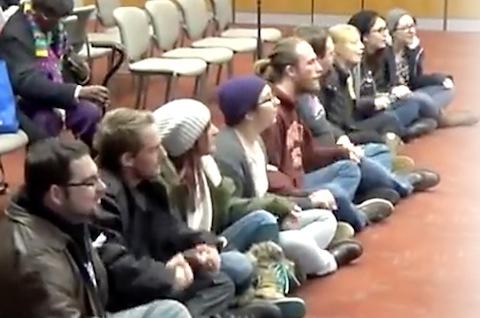 GRAND RAPIDS, MI – Despite federal court rulings ordering The Rapid – the public transit system in Grand Rapids, MI – not to prohibit or interfere with the free speech rights of ATU Local 836 members working for the agency, Grand Rapids police are threatening to detain Grand Valley State students and workers for a peaceful sit-in at a January Rapid board meeting.

Last Friday, Grand Rapids police detectives went to the homes of students and workers, threatening them with charges of disturbing the peace for their participation in the January sit-in to protest the proposed fare increases, the termination of workers’ pensions, and stalled contract negotiations between ATU Local 836 and The Rapid. This all came on the heels of Mayor Rosalynn Bliss attending a march last week to honor the life and legacy of labor activist Cesar Chavez, famed for using civil disobedience tactics on behalf of farm workers abused by their employers.

“Mayor Bliss marches to honor famous labor protestor Cesar Chavez, and then days later tried to silence and intimidate student and worker activists, who used Chavez’s same tactics, by having the Grand Rapids police storm their homes,” says ATU International President Larry Hanley. “This is a witch-hunt by Rapid CEO Peter Varga and the City of Grand Rapids that knows no bounds. We will continue this fight for as long as it takes to protect the students, our riders, and the livelihoods of our Rapid workers.”

The Rapid’s aggressive effort to muzzle their workers now includes intimidating and silencing their community supporters. After the agency earned its first temporary restraining order and a preliminary injunction from a federal court late last year, management threatened employees who engaged in peaceful protest on public streets with discipline and even possible criminal consequences. At the same time, management threatened to take legal action against workers for speaking during the public comment periods at The Rapid Board’s public meetings. These threats led the union to file a second motion for another preliminary injunction in October, which they also won.

Late in January, community activists led by United Students Against Sweatshops (USAS) staged a fare strike, encouraging riders to refuse to pay their fares to protest threats against transit worker pensions, violations of the workers' First Amendment rights, a recent 16% fare hike, and a generous raise for the agency's CEO.

“I was surprised and scared that there was a Grand Rapids police detective at my door to question me,” says Grand Valley State junior Jen Knickerbocker “It’s very frightening to be told you are going to be charged with a crime for participating in a peaceful protest at a public meeting.

“It’s clear to me that the city and The Rapid will stop at nothing to silence anyone who stands in their way. The very fact that the mayor and The Rapid are using police officers as political operatives to intimidate members of the community should alarm everyone.” Knickerbocker says the detective also asked her about fellow students who also attended the sit-in.

Natalie Yoon, USAS Domestic Campaigns Coordinator added, "This attack on student and community voices is shocking and has sparked national outrage. Our national network of student labor activists will be supporting the students of Grand Valley State until all charges are dropped and the city of Grand Rapids respects the rights of the community to peacefully demonstrate their support for bus riders and drivers."

“Local 836 stands strong with these students and entire community of Grand Rapids,” says ATU Local 836 President RiChard Jackson, “We will continue to protest this attempt to rob riders and push our workers into the ranks of the working poor.”

For more information on this struggle please go to http://labornotes.org/2015/11/grand-rapids-bus-drivers-fight-save-pensions