1) Still Working Hard: An Update on the Share of Older Workers in Physically Demanding Jobs 2) Almost Two-Thirds of People in the Labor Force Do Not Have A College Degree 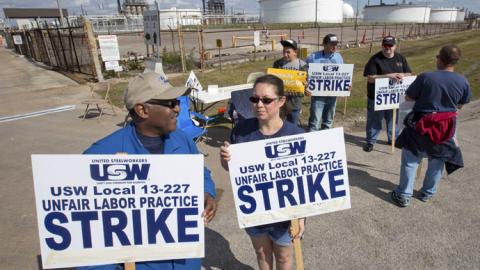 Almost Two-Thirds of People in the Labor Force Do Not Have A College Degree
Still Working Hard: An  Update  on  the  Share  of  Older Workers  in  Physically  Demanding Jobs

Almost Two-Thirds of People in the Labor Force Do Not Have A College Degree
Robert E. Scott and David Cooper
Economic Policy Institute
http://www.epi.org/publication/almost-two-thirds-of-people-in-the-labor-force-do-not-have-a-college-degree/

Almost two-thirds of people in the labor force (65.1 percent) do not have a college degree. In fact, people without a college degree (which includes those without a high school degree, with a high school degree, some college education, and an associates’ degrees) make up the majority of the labor force in every state but the District of Columbia. Mississippi has the highest share of non-college educated workers (75.7 percent) while Massachusetts and the District of Columbia have the lowest shares (51 percent and 33.7 percent, respectively).

It is no secret that wages for typical workers have stagnated over the past 35 years. The lagging recovery of construction and manufacturing sectors, two sectors which traditionally provide strong wages for workers without college degrees, is one reason for this wage stagnation. Trade agreements like the Trans-Pacific Partnership threaten to make the possibility of strong, middle-class jobs even more elusive for non-college educated workers.

We cannot solve the problem of low and stagnating wages for non-college educated workers by expecting everyone to pursue more education. We need solutions that will raise wages for all workers, regardless of educational attainment. These solutions include raising the minimum wage, strengthening collective bargaining rights, prioritizing very low rates of unemployment through monetary policy, and reducing our trade deficit by stopping destructive currency manipulation.

A  recurring  theme  in  debates  over  Social  Security  policy  is  that  workers  should  be  encouraged  to work  later  into  their  lives  by  raising the  age  at  which  they  can  get  full  benefits.  Implicit  in  this argument is that most workers are in a situation where they would be able to work to an older
age; however, many older workers stop working because they can no longer meet the physical demands of their job.

Read the remainder of the report here.