Among the accomplishments of the Cuban revolution have been the great strides made in the education of its entire people. Education is completely free from primary school through university. Cuba today has a literacy rate of over 96 percent, putting it at the top of all Latin America. But the struggling economy has not created the kind of economic opportunity that is commensurate with an educated population, particularly in the professions. 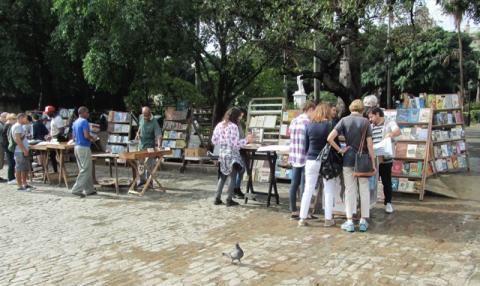 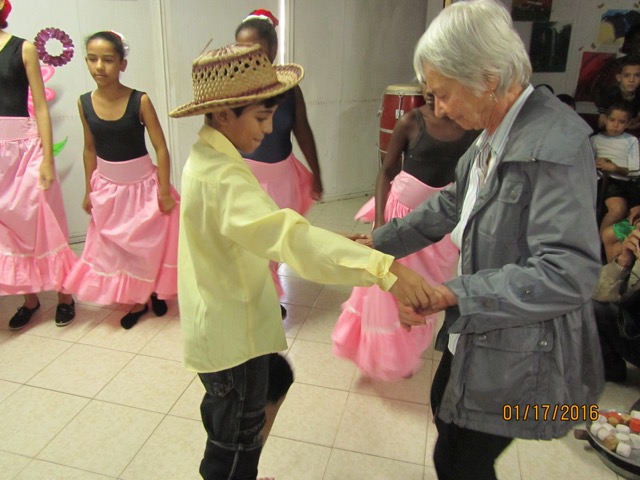 Nettie Becker, wife of the writer of the article, dancing with Cuban children in La Conceit, a small village in Pinar Del Rio, at a dance performance the children put on for their American visitors.
Photo credit: Paul Becker
On our trip to the island in January, we spent a day in a small village in Pinar del Rio listening to the story of its people.  The village is home to 8,300 people in 1,300 families. Before the revolution, in villages like this people were barely literate and children grew up with little prospect but manual labor in the cane fields as their only life. Today there are 10 elementary schools, a middle school, and a high school as well as a child care center for pre-school children and a nearby college.
But the village has another distinction, a unique project of the community known as Los ChapuSerios. The project encouraged children in the village to make films about their lives and to tell the story of the village. Classes were started in filmmaking, using one old camera. On Sundays and after school at a local community center, the children wrote their scripts, then chose what they viewed as the best and they cooperated on polishing it. They chose the casts, the directors and the camera operators. National renowned Cuban film artists came in to work with the children. Some of the films were shown on national television. The village had a factory that employed most of its people but, as a result of the embargo, it could not improve its technology and its production was increasingly obsolete. The factory was scheduled to be closed down resulting in severe hardship when the children, and their adult directors decided to tell the story. The film they made aroused widespread attention and concern. Money was raised both in Cuba and abroad for the necessary technological improvements and the updated factory continued to operate.
Another film, entitled Serving the Soul, tells the story of some children who had witnessed domestic violence in their homes and some whom had a parent spending time in jail for commission of a crime. The director of the film, 11 year old Amalia Gonzalez Garcia, and the lead actress, Leidy Marian Garcia Rodriguez, also 11, were themselves part of families like this. They spoke to our American group of their experiences and how their lives had changed in making their film. And as the adult manager of the film project, Zenobio Jimenez, and the teacher who was teaching the filmmaking art, Juancarlos Banos Fernandez, also spoke, the pride they had in the children shone through each word. They plan to show their film in the prisons where some of their parents are serving their sentences as a way of telling the story of how parents actions affect their children. 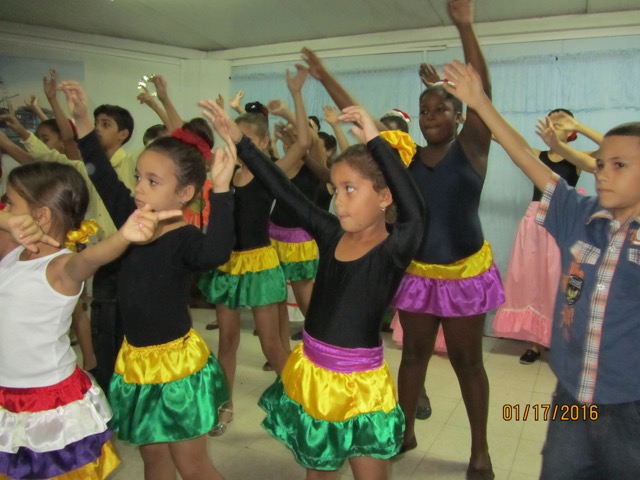 This photo is one of a younger group of children at the dance performance.
Photo credit: Paul Becker
Before we left, we were treated to a dance performance by the children who then encouraged their American visitors to join them in their dance. As the Cuban children and their American guests swirled around the floor, you could not help but choke up a little at the prospect that our two people might finally break down the barriers that have separated us for more than 50 years. And you could not help but hope that this Cuban revolution that has brought so much to its people will make the democratic reforms that are now necessary to solve some of its current problems, rekindle the confidence of all its people, particularly the young, and move forward. In the last analysis, that will be up to both Cubans and Americans in the coming years.
[Paul Becker is a retired teacher, currently a freelance writer, who recently returned from a visit to Cuba.]
Subscribe to Portside