The Sun-Times previously has reported that, over the past seven years, the police have spied on anti-Olympics protesters, the Service Employees International Union, critics of the visiting Chinese premier, the Occupy movement and NATO Summit demonstrators. Following nationwide protests over the shooting of 18-year-old Michael Brown in Ferguson, the police here monitored black demonstrators and kept logs of events led by the Rev. Jesse Jackson and other groups. 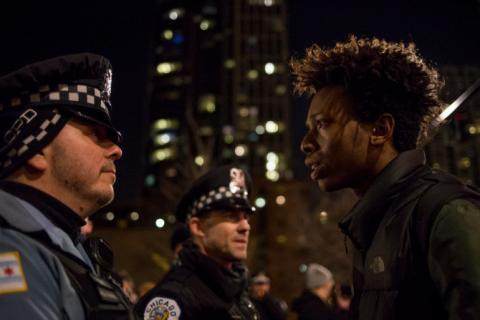 A protester confronts a police officer in the Loop last Nov. 24 after the release of a police dashcam video showing the fatal shooting by a cop of 17-year-old Laquan McDonald, Alex Wroblewski / Sun-Times

The police department already had been monitoring the actions and online postings of protest groups in the aftermath of the 2014 shooting of a black teenager by a white cop in Ferguson, Missouri.

Then, in October, the records show Ralph Price, the police department’s top lawyer, signed off on a plan to send undercover cops to “monitor” meetings of four additional groups. They included Black Lives Matter activists, as well as churches and philanthropic organizations.

A month later — after the court-ordered release of police dashcam video showing a white Chicago cop, Officer Jason Van Dyke, shooting and killing a black teenager, Laquan McDonald — a top Emanuel aide went to the command center of the city’s Office of Emergency Management and Communications to keep tabs on protests organized by the Black Youth Project 100, one of the groups spied on by the police.

Joe Deal, deputy chief of staff for the mayor, relayed information gathered by public safety officials to mayoral chief of staff Eileen Mitchell and the City Hall press team. That’s according to emails that were buried amid a trove of records released by the city in late December amid outrage over the video, which showed the teenager, who had a knife, being shot 16 times as he appeared to walk away from Van Dyke.

It was the seventh investigation opened by the police department since 2009 to monitor groups exercising their free-speech rights. The department requires investigators to justify such investigations in a “First Amendment Worksheet” outlining each proposed inquiry, which are supposed to be allowed only when there’s a “reasonable law enforcement purpose.”

The Sun-Times previously has reported that, over the past seven years, the police have spied on anti-Olympics protesters, the Service Employees International Union, critics of the visiting Chinese premier, the Occupy movement and NATO Summit demonstrators.

Also, in late 2014 and early 2015, following nationwide protests over the shooting of 18-year-old Michael Brown in Ferguson, the police here monitored black demonstrators and kept logs of events led by the Rev. Jesse Jackson and other groups.

In each case, members of the groups being investigated had spoken out against City Hall or its allies.

Since 2009, only one police request to investigate protesters has been rejected by department lawyers, records show. That was in 2012, when a commander proposed using undercover officers for “infiltration” of activists planning a march during the NATO Summit, held in Chicago. The police already had a separate investigation into NATO protesters underway.

For decades, the police department had a unit, known as the Red Squad, that spied on dissidents and City Hall foes. It was disbanded in the 1970s.

But those targeted by the recent investigations say little really has changed.

“I always operate under the assumption that someone is looking at us,” says DeAngelo Bester, co-executive director of the Workers Center for Racial Justice, one of the groups the police investigated last fall.

Bester, whose group’s main focus is access to jobs, says it’s “ridiculous” and wasteful to spy on law-abiding protesters.

“The Chicago Police Department and Emanuel administration try to justify the harsh treatment [by cops] in black communities by saying there’s so much violence,” he says. “Meanwhile, they’re spending the time and resources to surveil groups exercising their First Amendment rights.”

Organizers for the Black Youth Project 100 — a leading voice in the Black Lives Matter movement that had been demonstrating against police shootings — say they aren’t surprised the police spied on them.

“There’s just a history of knowing we are organizing in a very hostile environment,” says Johnae Strong, a Chicago leader of the group. “The Chicago Police Department does exactly what it wants to do and finds ways to make it bureaucratically valid.”

Police spokesman Anthony Guglielmi says the investigation was “routine,” legal and “documented to ensure transparency with the public.”

The undercover police operations last fall stemmed from plans announced by the Black Youth Project, the Workers Center and Southsiders Organized for Unity and Liberation — a coalition of churches and neighborhood groups known as SOUL — to protest the annual conference of the International Association of Chiefs of Police, held Oct. 24-27 at McCormick Place.

Funders for Justice — a nationwide network of philanthropic groups that includes the Ford Foundation, one of the country’s biggest and best-known charitable organizations — posted an announcement of the “counter-conference” on its website. The Funders group had been formed to support discussions of police practices post-Ferguson.

On Oct. 19, police Cmdr. Leo Panepinto asked for departmental approval to investigate Funders for Justice and the three activist groups for the next nine days, according to the First Amendment Worksheet he filed.

Panepinto is the commanding officer of the Crime Prevention Information Center, where the police gather intelligence with agents from the FBI and the federal Department of Homeland Security. The center had also collected information on African-American protesters in 2014 and early 2015, records show.

According to Panepinto, the chiefs’ association had learned demonstrators planned to “disrupt” the conference. He wrote that “the methods, scale and actions such groups intend to take to cause their disruptions are not identified and may include unlawful conduct.”

He didn’t explain why the four organizations listed were chosen but got permission to send undercover officers to their meetings.

On Oct. 22, Black Youth Project, the Workers Center for Racial Justice and SOUL demanded that City Hall and the federal government spend more money investing in black communities and less on policing. Two days later, some demonstrators marched from police headquarters at 35th and Michigan to McCormick Place, while others chained themselves together to block an entrance to the police chiefs’ convention.

“Social media was monitored,” police records show. “There were discussions of civil disobedience.”

After several hours, 66 protesters were arrested outside McCormick Place.

A month later, a judge ordered the release of the McDonald shooting video. Before the city complied, aides to Emanuel asked black elected officials, pastors and organizers to meet with him at City Hall on Nov. 23 in an attempt to minimize the fallout.

Black Youth Project leaders turned him down. Then, they held a news conference outside the South Side courthouse where the arrested McCormick Place protesters were appearing before a judge. Mayoral spokesman Adam Collins emailed the group’s press release to other top Emanuel aides.

Later, on Facebook, the organization announced plans for a protest at 5:30 p.m. the following day — after the city released the McDonald video. Several mayoral aides were tracking protesters on social media, and one forwarded the rally information to other Emanuel staffers, according to the emails released by the mayor’s office.

City officials made the McDonald video public the afternoon of Nov. 24, as Emanuel called on demonstrators to remain peaceful.

At 6:22 p.m. that day, Deal emailed the first in a series of updates on the Black Youth Project protest to Collins, chief of staff Mitchell, Guglielmi and others, including Michael Sacks, chairman of the investment firm GCM Grosvenor and one of Emanuel’s closest advisers and biggest campaign contributors.

About 30 demonstrators were marching in the street down Roosevelt Road, Deal wrote, citing information from OEMC, which coordinates the city’s public-safety efforts.

“I will be at OEMC this evening and will report any significant activity,” he wrote.

An hour later, Deal reported the group had grown to 150 people and had moved to Balbo and Michigan, where some protesters were sitting in the street. Guglielmi forwarded the message to then-Supt. Garry McCarthy and other police officials.

“Any sign it’s growing?” emailed David Spielfogel, then one of Emanuel’s top advisers.

“It definitely grew in the last hour,” Deal replied, and minutes later he emailed a photo. “It looks like mostly college kids. They are trying to antagonize the line of cpd.”

At 10:12 p.m., Deal reported a “minor skirmish” between protesters and police and at 12:45 a.m. wrote that protesters had surrounded a squad car: “They aren’t doing anything. Just surrounding it.”

Just before 1 a.m., he wrote that the protest was over.

According to Collins, the mayor’s “office has no involvement in the investigatory decision-making of the police department.”

He didn’t respond to questions about why other top aides and press staff were tracking protesters.