Former Greek Finance Minister Yanis Varoufakis revealed for the first time how days after he resigned, the Troika effectively abolished a unit he had set up to combat tax evasion. European Commission (EC) President Jean-Claude Junker led the efforts to prevent Greece from collecting taxes. Junker was Minister of Finance and later Prime Minister of Luxembourg from 1989 to 2013. Varoufakis called Luxembourg the largest tax haven in the world. 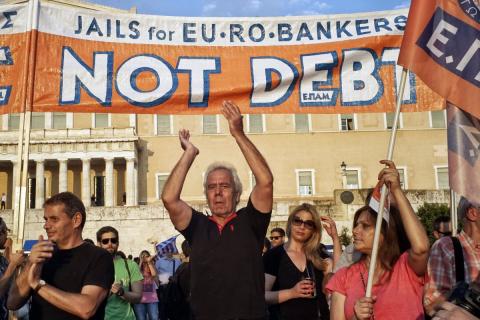 Demonstration last year against the Troika mandated austerity plan - a plan that the Greek voters initially voted down., Milos Bicanski/Getty Images // Business Insider (UK)
A drumbeat of the Troika that ended Greek sovereignty last year was that the government wasn't collecting taxes. The Troika was the European Commission (EC), the International Monetary Fund, and the European Central Bank. That charge came from a collection of states that includes some of the world's worst tax evasion enablers, including the Luxembourg of EC President Jean-Claude Junker, whose country is a world class tax haven.

Former Greek Finance Minister Yanis Varoufakis revealed for the first time how days after he resigned, the Troika effectively abolished a unit he had set up to combat tax evasion.

Varoufakis talked about this yesterday at the Council on Foreign Relations. He appeared on the publication of And the Weak Suffer What They Must? Europe's Crisis and America's Economic Future, (Nation Books).
I had asked Varoufakis if, as Greece was being attacked by European Union countries and representatives for not collecting the taxes due from individuals, businesses and corporations, if he had pointed out to the attackers that among them countries such as France, the U.K., and Luxembourg run tax havens where these individuals and businesses stash their money - so that they don't pay taxes.
[Though people know that the UK and Luxembourg are big tax cheating centers, many are not aware that France exercises judicial control in tax haven Monaco.]

Varoufakis pointed out that he didn't have to, because Junker, "the president of the European Commission was running the largest tax haven in the world. It's called Luxembourg, yeah?" He said Junker had given him "a little lecture on tax collection. I said, really?" (Audience laughter.)

[Junker from 1989 was Minister of Finance and for an overlapping period Prime Minister of Luxembourg till 2013. No one is more responsible for the corrupt offshore money-laundering center he helped build.]
But then Varoufakis exposed the hypocrisy of the Troika, detailing how it destroyed a computerized system set up to catch tax evaders and "encourage" them to pay their taxes. 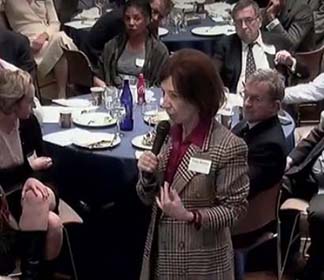 Lucy Komisar asks about tax havens at Yanis Varoufakis meeting.
photo credit: The Komisar Scoop
The most traumatic experience
He said: "But let me relate to you the most traumatic experience I've had, more traumatic than negotiations or anything of the sort. I saw my job for the five months I was in government as effectively having two pillars. One was the negotiations and the other was tax evasion.
"So from day one, I put together, I convened a working group for homing in on the major tax evaders, yeah? So I put together two teams within the ministry, one from the equivalent of the IRS and the other one from IT, because you've got to realize that through austerity cuts and so on we didn't even have the personnel to go after the tax evaders in the way that it would happen here in the United States.
"So the way we did it was I leaned very, very heavily upon the banks to get real-time data of all transactions within the country and without the country for the last 15, 20 years. That took two, three months, and a lot of leaning on bankers to do it, but we got it.
"And then it was-I thought it was a simple matter of creating an algorithmic system, software, that would compare all the transactions from tax file number to tax file number with tax returns.
"I had a lot of resistance from the Greek IRS, which I didn't control-not because it's independent, but because it was answerable directly to the Troika, our lenders. And in any case, I banged a few heads, put together this working group.

"Preliminary results in late May of 2015 revealed more than 480,000 tax file numbers that [each] had evaded more than $150,000. That is a lot of money for the Greek-for the small, Greek state. And some of them it was millions, yeah?

"And this group was going to come to its final findings in October of last year. And our idea was very simple. Once we had the final list, instead of going through the process of prosecuting and all that, we would just announce that this is what we've done, without any names at all, and we would say, OK, now here is a website. You can go there, and you have a week to pay what you think you owe.
"And if you do, we will give you tax immunity-immunity from prosecution-and we would turn a blind eye. That was the plan.
"Now, let me tell you that the greatest resistance to this came firstly from the oligarchs within Greece who were connected to the Greek IRS, with great cover from the Troika.
"And this is-so this sounds a bit strange. But remember, during those months I was in office the press-the Greek press, television, radio, newspapers, that is owned by the oligarchs, was completely and utterly in support of the Troika against me and against the prime minister. And they were getting some cover for it.

"OK, 6th of July I resign, 8th of July, the head of this working group calls me-I was no longer the minister, but I had appointed him-in tears, saying that the Troika is trying to disband the unit. Thirteenth of August, the memorandum was signed, my prime minister had capitulated. In it, it stated clearly that this working group is disbanded and absorbed by the original IRS, which was doing nothing. 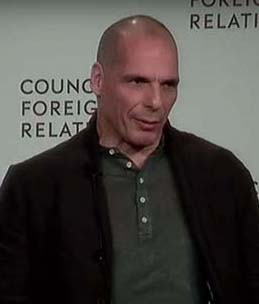 Yanis Varoufakis answers Lucy Komisar's question.
photo credit: Council on Foreign Relations
The Troika is the oligarchs' and tax evaders' best friend
"So the Troika is the oligarchs' and the tax evaders' best friend. It's very difficult to explain this to people."
Varoufakis noted that Greece had suffered from tax evasion and, even worse, tax immunity - those in power manipulating the system in such a way that they didn't have to pay tax.
He said the situation had improved for "sad reasons." He explained, "The powers that be have already taken their money out long ago from Greece. And those who are left behind don't have a way of tax evading anymore. So the degree of tax evasion has been severely circumscribed of recent, but that's not for good reasons."
Later, talking to a few reporters (no mainstream press attended his talk), Varoufakis was asked if he supported Bernie Sanders.
He replied, "I'm biased. Bernie Sanders called me personally in January last year when I got into the ministry and wished me well. Before he knew who he was." An ironic comment, meaning Bernie Sanders was not then a major candidate for the Democratic presidential nomination.
Varoufakis said, "I don't believe Donald Trump even knows where Greece is. And I much want to keep it that way. Bernie Sanders knows where Greece is and he was very supportive of what we were trying to do."
For transcript, audio and video. In the one-hour video, Lucy's question is at 32:40 minutes in.
[Lucy Komisar's beat is the secret underbelly of the global financial system - offshore bank and corporate secrecy - and its links to corporate crime; tax evasion by the corporations and the very rich; empowerment of dictators and oligarchs; bribery and corruption; drug and arms trafficking; and terrorism. Her articles have appeared in publications as diverse as The Nation magazine and the Wall Street Journal.]
Thanks to the author for sending this to Portside.
Subscribe to Portside