"It is clear that [C8] contamination is not a state problem or a regional problem," the governors of New York, Vermont and New Hampshire wrote in a March letter addressed to EPA Administrator Gina McCarthy, "it's a national problem that requires federal guidelines and a consistent, science-based approach." 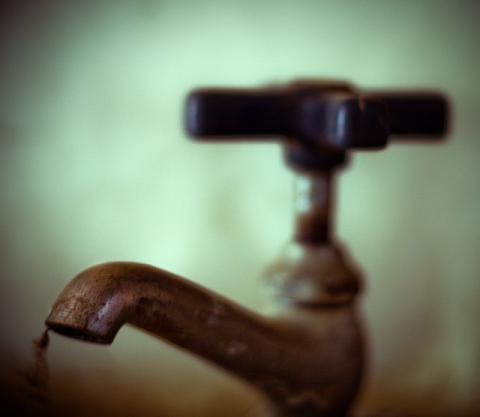 Photo by Rick Harris State officials want the Environmental Protection Agency to issue federal guidelines on how to understand the hazards of PFCs and how best to respond when water pollution is discovered. , Rick Harris

New information emerged last month about toxic contamination from chemicals used to manufacture Teflon pots and pans and many other consumer, military, and industrial products. Water tests in several states have revealed a growing number of sites where the groundwater is polluted by the most well studied of these chemicals — C8 or PFOA — prompting calls from a group of state governors for federal action.

Meanwhile there are new indications that another perfluorinated chemical (PFC), heavily promoted by chemical manufacturers as a safer substitute for C8, is also toxic and just as persistent in the environment as C8, raising questions about the adequacy of a voluntary C8 phase-out agreement promoted for the past decade by the Environmental Protection Agency.

First created in a lab in 1947, C8 has managed to spread extraordinarily far and wide. Built from one of the strongest bonds in organic chemistry, the tie between carbon and fluorine atoms, the chemical that acts as a surfactant was, until recently, used not just in Teflon cookware, but in hundreds of other consumer products including fast food wrappers, waterproof clothing, electrical cables, and pizza boxes.

As with many other PFCs, C8 is impervious to breaking down or biodegrading. It can also accumulate in the human body over time and has been linked to at least six serious health conditions, including kidney cancer, ulcerative colitis, and thyroid diseases. According to the Centers for Disease Control, the chemical can now be found in trace amounts in the blood of roughly 98 percent of Americans.

Ongoing legal battles surrounding C8 contamination by a former DuPont plant in West Virginia have drawn renewed attention to the risks associated with the chemical. (Read “Teflon’s Toxic Legacy,” our in-depth report on how DuPont hid information that C8 was making people sick.) And now this toxic chemical is being found at potentially hazardous levels in places ranging from small New Hampshire towns to the lead-laced waters of Flint, Michigan.

In New York's Hoosick Falls, where in 2014 local authorities refused to conduct tests until one resident provided them with lab results from his own water showing high levels of C8, a Saint-Gobain Performance Plastics plant was recently declared a Superfund site.

“Every time I think about it, I just feel like crying,” Virginia Barber of North Bennington, VT, where over 100 water wells have tested positive for C8 contamination, told The New York Times. Barber now relies on bottled water.

In 2012, EPA added C8 and five other PFCs to its list of unregulated contaminants that public water systems should test for under the Safe Drinking Water Act. Testing between 2013 and 2015 showed over seven million people in 27 states had trace amounts of C8 in their tap water, according to an Environmental Working Group analysis published last month.

So, is all of that water unsafe to drink? Depends on whom you ask.

The levels of C8 in municipal water supplies were all below 400 parts per trillion, concentrations that the EPA, in a 2009 provisional health advisory, suggests should be safe if you were drinking that water for just a few weeks. (The agency has yet to issue any binding regulations capping C8 levels in public water supplies). Officials in Vermont, however, say that tap water should contain less than 20 parts per trillion of C8, a threshold that takes the impacts on infants and small children into account. The levels of C8 in the tap water were higher than that in every one of the places that tested positive for the chemical.

But even as authorities continue to realize how far C8 has spread, public health experts are calling attention to dozens of related, unregulated chemicals that may pose similar threats but about which the public knows very little.

Under a federally-backed agreement, American chemical manufacturers agreed to phase out their use of C8 and a handful of related chemicals by the end of 2015. But while the eight C8 manufacturers — some of the largest chemical makers in the US — that participated in the voluntary agreement say they stopped using C8 at the end of 2015, environmental groups warn that the substitutes they've adopted are under-studied and likely to be dangerous as well.

DuPont, for instance, introduced one such substitute, called GenX, in 2010, describing it as a chemical “technology” that “enables the company to make high-performance fluoropolymers without the use of PFOA."

But as with the case of C8, DuPont’s own research, starting 50 years ago, showed troubling indications that GenX  may be little better for human health or the environment than C8, despite being heavily promoted as a safer substitute. According to research reported to the EPA between 2006 and 2013 and newly obtained by The Intercept via open records requests, DuPont had evidence as early as 1963 that GenX might pose a "substantial risk of injury to health or the environment since.

In 2005, the EPA had announced that DuPont agreed to pay the largest civil administrative penalty in the agency's history — over $16.25 million in penalties and research funding — because DuPont had concealed evidence of C8's toxic effects on people and animals. The GenX filings — required under the same provision of the Toxic Substances Control Act that DuPont stood accused of breaking — revealed troubling signs that animals exposed to GenX became ill, developing liver and kidney problems, cancer, reproductive problems, and impacted immune systems.

Despite this evidence, the EPA has yet to require DuPont or its spin off company, Chemours, to conduct further testing of GenX. In part, this is because the Toxic Substances Control Act provides little latitude for the EPA to ban or restrict chemicals even when health risks are discovered. It is not uncommon for reports like these to prompt no action by the EPA.  The agency has only ever required companies to conduct further study of a couple hundred chemicals out of over 85,000 chemicals allowed on the market.

“A lot of them do just get filed away,” Vincent Cogliano, director of the EPA's Integrated Risk Information System, told The Intercept, in reference to the studies that that the industry turns in to the agency.

DuPont’s findings on GenX were based on research on lab animals, not humans. But if the research proves relevant for humans, it could have profound the implications for the entire chemicals industry.

Here’s the thing: GenX is what’s called a “short-chain PFC,” unlike C8 which is a “long-chain PFC. As awareness of the risks associated with C8 rose, industry groups pushed successfully for regulators to approach short- and long-chain PFCs differently, arguing that because the short-chain versions exit the human body faster, they should be considered safer substitutes for the long-chain versions.

These short-chain PFCs are used in a variety of goods including water-repellant clothing and outdoor gear, in fire-fighting foam used by the military, and in fast food wrappers and microwave popcorn bags.

The rise of GenX and other short-chain PFCs highlights how, under current chemical laws, steps to protect the public against one harmful chemical may inadvertently promote the proliferation of dozens of others that prove to be similarly or even potentially more dangerous.

"The painfully slow process of reducing the public’s exposures to PFCs reflects one of the biggest flaws of the 1976 Toxic Substances Control Act – that the EPA assesses health hazards chemical by chemical, rather than as a family," Environmental Working Group wrote last year.

Current federal laws allow chemicals like GenX to spread even when there are signs that they might be toxic and dangerous. "With decades of experience, not just with C8, that chemicals have these negative health effects, our law still says you can introduce these new chemicals into the marketplace without testing," Bill Walker, an investigator with EWG, told Earth Island Journal.

And GenX may be only the tip of the iceberg. EWG’s review of similar research filings to the EPA by chemical companies on more than 100 PFCs found several reports of worrisome animal testing results.

But the publicly available information on these substitutes often lacks crucial information. "We found that roughly 85 percent did not even tell you the name that a chemical was marketed under," Walker said. "Something like 55 percent didn't even disclose the name of the company in the public record that was available."

Concern about the continued unregulated expansion of fluorinated chemicals like GenX prompted more than 200 scientists to sign a warning called The Madrid Statement last year.

"While some shorter-chain fluorinated alternatives seem to be less bioaccumulative, they are still as environmentally persistent as long-chain substances or have persistent degradation products," the group of scientists wrote in a piece published in the peer-reviewed journal Environmental Health Perspectives. "In addition, because some of the shorter-chain [PFCs] are less effective, larger quantities may be needed to provide the same performance."

Meanwhile, state officials are turning to the federal government, calling for guidance on how to understand the hazards of PFCs and how best to respond when water pollution is discovered.

"It is clear that [C8] contamination is not a state problem or a regional problem," the governors of New York, Vermont and New Hampshire wrote in a March letter addressed to EPA Administrator Gina McCarthy, "it's a national problem that requires federal guidelines and a consistent, science-based approach."

Sharon Kelly is a Philadelphia-based lawyer and freelance writer. Her work has appeared in the New York Times, the National Wildlife Federation, and the Legal Intelligencer.