As Brexit Approaches, Europe's Left Is Divided - and for Good Reason

Can the EU still unite a continent shattered by world wars, or is it little more than a vehicle for austerity capitalism? Soon British voters will vote on Brexit - leaving the EU. Given the absence of a strong, continent-wide left, however, reversing the current economic rules of the EU may be a country-by-country battle. It's already underway - and for all of the economic power of the EU, the organization is vulnerable to charges that Brussels has sidelined democracy.

May 26, 2016 Conn Hallinan Foreign Policy in Focus
Printer friendly
As Brexit Approaches, Europe's Left Is Divided - and for Good Reason Published May 26, 2016 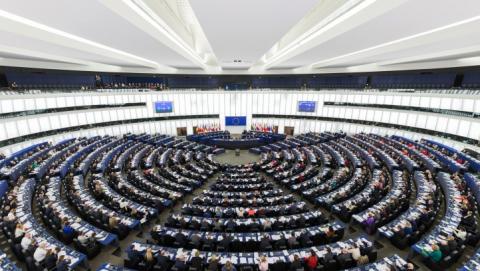 The European Union is one of the premier trade organizations on the planet, with a collective GDP that surpasses the world’s largest national economies.

But it’s far more than a trade group. It’s also a banker, a judicial system, a watchdog, a military alliance, and — increasingly — an enforcer of economic rules among its 28 members. “Larger now than the Roman Empire of two thousand years ago,” observes British historian Perry Anderson, “more opaque than the Byzantine, the European Union continues to baffle observers and participants alike.”

On the one hand it functions like a super state. On the other, it’s more like a collection of squabbling competitors, with deep divisions between north and south. On June 23, the two-decade-old organization will be put to the test when the United Kingdom — its second largest economy — votes to stay in the EU or bail out.

The awkwardly named “Brexit” has stirred up a witches’ brew of xenophobia, racism, and nationalism, but it’s also served to sharpen a long-standing debate among the European left over the nature of the EU. Does it serve to unite a continent shattered by two world wars, or is it little more than a vehicle to spread a species of capitalism that’s impoverished more people than it’s lifted up?

The EU was originally sold as an effective way to compete with U.S. and Japanese commercial power (and later China) by integrating the economies of Western Europe into a common market. The 1957 Treaty of Rome established the European Economic Community (EEC), but that organization was plagued by currency instability.

Currency manipulation is a standard economic strategy, one the U.S. Treasury Department follows to this day. The idea is to boost exports by deflating one’s currency, thus making one’s products cheaper. In an organization like the EEC, however, where currencies were traded back and forth, that strategy caused chaos, particularly after the Americans decoupled the dollar from gold in 1971. The U.S. immediately began aggressively devaluing its currency and undercutting Germany.

To make a long history brief, Germany and France began pushing for a common currency, though for different reasons.

For Germany, fluctuating currency rates cut into that country’s export engine. For France, a common currency promised to give Paris some say over the EEC’s economic policies through the creation of a European Central Bank, policies that at the time were largely determined by Germany’s powerful economy.

In the end, 19 countries would adopt the euro, creating the eurozone. Eight others, including Denmark, Sweden, and Poland kept their own currencies. Although Britain opted out of adopting the euro as well, London rapidly became the financial center of the continent.

The common currency — established by the 1991 Maastricht Treaty and launched in 1999 — effectively put the German Bundesbank in charge. The bank agreed to the common currency, but only on the condition that everyone kept their budget deficits to 3 percent of national income and held their government debt level at 60 percent of GDP. Those figures matched Germany’s economy, but very few of the other states in the EU.

The Maastricht Treaty also transformed the EEC into the EU in 1993.

Henceforth, deflating a national currency as a tactic to increase exports and stimulate growth during a downturn was no longer an option, and the debt ratio was set so low that few economies could keep to its strictures.

When the bottom fell out during the 2008 economic meltdown, EU states found out just what they had signed on for: draconian austerity measures, the widespread privatization of state owned enterprises — from water and electrical systems to airports and harbors — and emigration. Millions of mainly young Portuguese, Irish, Greeks, and Spaniards fled abroad.

The European Central Bank with its cohorts, the International Monetary Fund and the European Commission — the so-called troika — straitjacketed economies throughout the continent, turning countries like Greece, Spain, Portugal, and Ireland into basket cases. The troika forced them to borrow money to keep their banks afloat while instituting austerity regimes that led to massive unemployment, huge service cutbacks, and rising poverty rates.

The troika had a neat trick: It shifted the debts incurred by private speculators onto the public, while the Germans spun up a fairy tale to explain the counter-example: the frugal frau. “TheSwabian housewife,” lectured German Chancellor Angela Merkel, “would have told us her worldly wisdom: In the long run you cannot live beyond your means.”

Except that the debts were not due to the Greeks, Irish, Spaniards, and Portuguese “living beyond their means.” They were just picking up the tab run up by private speculators. Indeed, the vast majority of “bailouts” that followed the crash went directly into the vaults of French, British, German, and Austrian banks. On the day the Greek “bailout” was announced, French bank shares rose 24 percent.

In many ways, the EU resembles a military alliance on the march. Jan Zielonka, a professor of European politics at Oxford, calls the EU a “postmodern empire,” filling the vacuum created by the fall of the Soviet Union and using “checkbooks rather than swords as leverage.”

During the Clinton administration, the EU — along with NATO — pushed eastward, creating what Zbigniew Brzezinski called “the Eurasian bridgehead for American power and the potential springboard for the democratic system’s expansion into Eurasia.” Indeed, in a nod to this legacy, the Obama administration strongly supports the UK remaining in the EU today.

But the EU has very little to do with “democracy,” as the recent Greek crisis demonstrated.

In a confrontation between the then newly elected Greek Finance Minister Yanis Varoufakis and German Finance Minister Wolfgang Schauble, for example, the latter refused to negotiate over the austerity program that had cratered Greece’s economy. “I’m not discussing the program,” said Schauble. “This was accepted by the previous [Greek] government and we can’t possibly let an election change anything.”

In short, the troika — an unelected body — makes all economic decisions and is unwilling to consider any other approach but that of the mythical Swabian housewife. It isn’t democracy that’s moving east, but the Bundesbank — and a species of capitalism that’s unmoved by unemployment, poverty, and widespread misery.

Crosscurrents on the Left

So is the Brexit a challenge to the growing might of capital and an implicit critique of the EU’s dearth of democracy? Nothing’s that simple.

First, the loudest critics of the EU are people one needs a very long spoon to sup with: Marine Le Pen’s racist National Front in France, Britain’s xenophobic United Kingdom Independence Party, Hungary’s thuggish Jobbik, Greece’s openly Nazi Golden Dawn, and Italy’s odious Northern League. Hatred of immigrants and Islamophobia are the glue that binds these euroskeptic parties, which are active and growing throughout the EU.

Indeed, some on the British left have suggested voting against a Brexit precisely because the most vocal opposition to the EU comes from the most reactionary elements in the UK. The British Conservative Party is deeply split on the issue, with its most right-wing and anti-immigrant members favoring getting out.

The left is also filled with crosscurrents. While some argue for getting out because they see the EU as an undemocratic vehicle for the expansion of international capital, others are critical but advocate staying in. British Labor Party leader Jeremy Corbyn — hardly a friend to international capital — opposes the Brexit.

While Corbyn is deeply critical of the EU’s lack of “democratic accountability” and its push to “privatize public services,” he argues that there is a “strong socialist case” for staying in. Corbyn says the EU plays a positive role on climate change and that exiting the EU would initiate a race to the bottom on issues like equal pay, work hours, vacations, and maternity leave. The Scottish National Party, which is to the left of the Labor Party, also opposes a Brexit, and threatens to call for another independence referendum if it passes.

Left parties in Greece, Italy, Spain, Portugal, and Ireland are also critical of the EU, but most don’t advocate withdrawing. What they’re demanding is a say over their economic decisions and relief from the rigid rules that favor economies like Germany — and bar many others from ever becoming debt free.

It’s ironic that Germany — the country that refuses to even consider retiring some of the overwhelming debts that enchain countries like Greece — owes its current wealth to the 1951 London Conference, which cut post-war Germany’s debt in half, lowered interest rates, and stretched out debt payments. The result was the Wirtschaftswunder— the economic miracle — and the creation of an industrial juggernaut. Greece’s Syriza Party has long called for such a conference to deal with the EU countries mired in debt.

Yet there’s no secret why Germany, France, and the European banks oppose debt reduction, or “haircuts”: Between the three of them, they hold almost $84 billion of Greece’s debt.

The polls show the British electorate could go either way on a Brexit.

What happens if they do leave is hardly clear, because it would be a first. The predictions range from doom and gloom to sunny days and everything in between, although it’s doubtful the EU would severely punish Europe’s second largest economy.

One model the left needs to look at in this battle is Portugal, where three left parties who’ve long fought with each other found common ground around reversing the austerity policies that have racked the country’s economy for four years. Portugal just recently received a barely favorable bond rating that gives the coalition government some breathing room. The economy is growing and unemployment is down. But at 129 percent of GDP, Portugal’s debt burden is still the third highest in Europe.

Alone, Portugal is no match for power of the troika. But Lisbon has allies in Spain, Greece, Ireland, and increasingly Italy. Support for the EU in Italy has gone from 73 percent in 2010 to 40 percent today. “Europe has taken the wrong road,” says Italian Prime Minister Matteo Renzi. “Austerity alone is not enough.”

Given the absence of a strong, continent-wide left, however, reversing the current economic rules of the EU may be a country-by-country battle. It’s already underway — and for all of the economic power of the EU, the organization is vulnerable to charges that Brussels has sidelined democracy.

If Brussels — read Germany — can be persuaded or forced to agree to debt reductions, to loosen the spending restrictions, and start pump priming, Europe can do something about its horrendous unemployment rate and underperforming economies.

If not, whether the British leave or not may be irrelevant: A house divided cannot stand for long.

[Foreign Policy In Focus columnist Conn Hallinan can be read at Dispatches from the Edge and Middle Empire Series.]