Political courage might seem to be in short supply, but it was inside a young boxer from Louisville 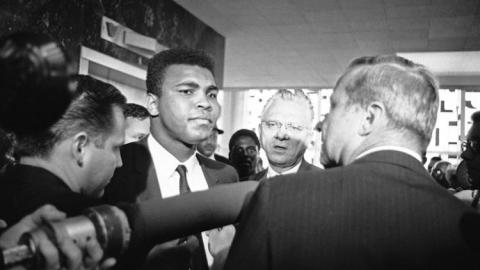 Muhammad Ali with his chief attorney Hayden Covington, right, on June 19, 1967 in Houston, Tex., as Ali goes to trial on charges of refusing to be inducted into the armed services., Ed Kolenovsky / Associated Press

Muhammad Ali's saga is without parallel: the champion boxer who was the most famous draft resister in history; a man whose phone was bugged by the Johnson and Nixon administrations yet who later was invited to the White House of Gerald Ford; a prodigal son whom his hometown city council in Louisville, Ky., condemned, but who a few years later had a main street renamed in his honor and today has a museum that bears his name.

His life was one of polarization and reconciliation, anger and love, and a ferocious, uncompromising commitment to nonviolence, all delivered through the scandalously dirty vessel of corruption known as boxing. Few have ever walked so confidently and casually from man to myth, and that journey was well earned.

As football great Jim Brown said to me last year: “It was unbelievable, the courage he had. He wasn’t just a championship athlete. He was a champion who fought for his people…. The man used his athletic ability as a platform to project himself right up there with world leaders … going after things that very few people have the courage to go after. From the standpoint of his ability to perform and his ability to be involved with the world, Ali was the most important sports figure in history.”

To this day it is awe-inspiring that he once bellowed 'God damn the white man’s money' at a time when such words were more than shocking — they were sacrilege.

Or, as Bill Russell said in 1967 in supporting Ali’s decision to risk five years in prison for resisting the draft: “I envy Muhammad Ali.... He has something I have never been able to attain and something very few people possess: He has absolute and sincere faith. I'm not worried about Muhammad Ali. He is better equipped than anyone I know to withstand the trials in store for him. What I'm worried about is the rest of us.”

Ali’s death, however, should be an opportunity to remember what made him so dangerous in the first place. The best place to start would be to recall the part of him that died decades ago: his voice. No athlete, no politician, no preacher ever had a voice quite like his or used it as effectively as he did. Ali's voice was playful, lilting, with a rhythm that matched his otherworldly footwork in the boxing ring. It's a voice that forced you to listen lest you miss a joke, a gibe or a flash of joy.

Retired New York Times sportswriter Robert Lipsyte said to me, “Before everything else, what I’ll remember about the young Ali was that he was so much fun.” And that his voice had a physical beauty that “beat you to death with his attractiveness.”

With that voice, face and body, the man Cassius Marcellus Clay Jr. could have been Michael Jordan before Jordan: an icon of ungodly wealth and conspicuous consumption.

But Cassius Clay chose to be Muhammad Ali and do something different with that voice. He used it to speak out from a hyper-exalted sports platform to change the world. He joined the Nation of Islam in frustration with the pace and demands of the civil rights movement. He was willing to go to jail in opposition to the war in Vietnam. But one has to hear the voice, and read the words, to understand what exactly made it so dangerous and, by extension, made it all matter.

Imagine not only an athlete but a public figure telling these kinds of unvarnished truths. To this day it is awe-inspiring that he once bellowed “God damn the white man’s money” at a time when such words were more than shocking — they were sacrilege.

It is awe-inspiring that, when facing five years in prison, Ali said: “I strongly object to the fact that so many newspapers have given the American public and the world the impression that I have only two alternatives in this stand — either I go to jail or go to the Army. There is another alternative, and that alternative is justice. If justice prevails, if my constitutional rights are upheld, I will be forced to go neither to the Army nor jail. In the end, I am confident that justice will come my way, for the truth must eventually prevail.”

He was equally moving when he said on another occasion: “Boxing is nothing, just satisfying to some bloodthirsty people. I’m no longer a Cassius Clay, a Negro from Kentucky. I belong to the world, the black world. This is more than money.”

In 1967, long before it was obvious to most, Ali connected the black freedom struggle to the injustices of the war in Vietnam, saying: “Why should they ask me to put on a uniform and go 10,000 miles from home and drop bombs and bullets on brown people in Vietnam while so-called Negro people in Louisville are treated like dogs and denied simple human rights? No, I'm not going 10,000 miles from home to help murder and burn another poor nation simply to continue the domination of white slave masters of the darker people the world over. This is the day when such evils must come to an end. I have been warned that to take such a stand would cost me millions of dollars. But I have said it once and I will say it again: The real enemy of my people is here. I will not disgrace my religion, my people or myself by becoming a tool to enslave those who are fighting for their own justice, freedom and equality.... If I thought the war was going to bring freedom and equality to 22 million of my people, they wouldn't have to draft me, I'd join tomorrow. I have nothing to lose by standing up for my beliefs. So I'll go to jail, so what? We've been in jail for 400 years.”

We haven’t heard Ali speak for himself in more than a generation, and it says something damning about this country that he was only truly embraced after he lost his power of speech, stripped of that beautiful voice. Ali may have seemed like he was from another world, but his greatest gift was that he gave us quite a simple road map to walk his path. It is not about being a world-class athlete or an impossibly beautiful and charismatic person. It is simply to stand up for what you believe in.

Political courage might seem to be in short supply, but it was inside a young boxer from Louisville who dreamed about being King of the World. Goodbye, Champ. Rest in power and peace.

Dave Zirin is the sports editor at the Nation and the author of, most recently, “Brazil’s Dance With the Devil: The World Cup, the Olympics and the Fight for Democracy.”