Who Is Responsible for Puerto Rico's Debt?

There's evidence some of it is illegal - and activists agree that Washington's colonial control over the island's economy helped create the crisis. We are urging members of Congress to put the people of Puerto Rico first and oppose H.R. 5278 as currently written, said SEIU 32BJ President Hector Figueroa. We need a real solution and Congress must get back to work immediately to provide a path forward that allows Puerto Rico to negotiate a feasible debt restructuring plan. 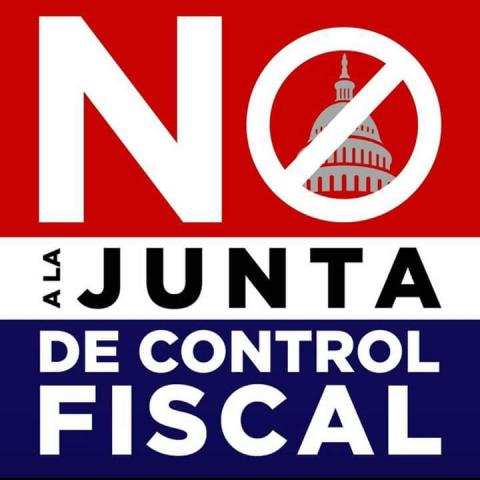 ., .
Who Is Responsible for Puerto Rico's Debt?
By Ed Morales
June 7, 2016
The Nation
Hillary Clinton's decisive victory over Bernie Sanders in the Puerto Rico Democratic primary on Sunday was not surprising. She won for the same reason she enjoys strong support from blacks and Latinos in the States: Previously established political networks that get out the vote, and the loyalty to local leaders and elected officials, translate into her margin of victory. Despite his more progressive policies, Sanders is not strongly enough embedded in this ground-level political discourse.
Yet the positions they take on Puerto Rico represent two competing strands in the fight to save the island from Republicans in Congress, who want to impose conservative, pro-business economic growth models, and hedge- and vulture-fund owners, who want to have their way with Puerto Rico's wealth and people. Clinton reluctantly endorses a debt-restructuring bill that would impose a fiscal-oversight board with colonial powers; Sanders favors emergency action from the Treasury Department in the form of loans and access to Chapter 9 bankruptcy.
There is a general consensus for many of the parties involved in the rapidly unfolding drama known as the Puerto Rican debt crisis that July 1 represents the clock striking midnight, the point at which we enter the potential chaos of unbridled bondholder lawsuits and even more draconian government cuts in services to the unincorporated territory inhabited by 3.5 million US citizens. At that point, Puerto Rico is expected to default on an $800 million debt payment of general-obligation bonds, which will spur the owners of that debt-whose payment is given priority over other governmental expenditures by the island's Constitution-into legal action. This was ostensibly the impetus for the House Committee on Natural Resources to release the final version of the Puerto Rico Oversight, Management and Economic Stability Act, aka PROMESA, on May 18, a bipartisan effort that drew sharp responses from various interest groups on the right and left.
The debt-crisis battle features a dizzying array of combatants: First are the bondholders, who are roughly divided into hedge- and vulture-fund owners mainly invested in what is called COFINA debt, which is secured by a share of the island's 11.5 percent sales tax; and other hedge fund and mutual-fund owners, who own general obligation (GO) bonds.
The latter group, represented by the lobbying efforts of the Koch-brothers-backed America Future Fund, Main Street Bondholders and 60 Plus organizations, supposedly consists of "average" Puerto Rican and US senior-citizen bondholders. But as The New York Times wrote last December, "Puerto Ricans own less than one-fifth of the island's debt," and "most of the group's revenue comes from a few large, anonymous contributors." Koch-affiliated groups are not happy with the PROMESA bill because it requires restructuring of the GO debt, even though it is backed by Puerto Rican constitutional guarantees, and they have voiced loud displeasure.

Even though Senator Bob Menéndez called the PROMESA bill "neocolonial," several members of the Hispanic caucus endorsed it.

Vulture-fund groups, many of whom bought bonds as cheaply as 30 cents on the dollar and which have more to gain by the potential of acquiring government-owned assets as part of a settlement, seem to be happy with the bill. Democrats like Nancy Pelosi strongly backed PROMESA because the bill "achieved a restructuring process that can work," even with its poison pill of austerity measures that include lowering the minimum wage to $4.25 for workers under 25 (if the governor chooses to enact this provision). Republicans like the sharply conservative Puerto Rico-born Raúl Labrador and Rob Bishop, who shepherded the bill through the House as committee chair, are satisfied, since the bill left out any provision for healthcare parity and satisfied the Republican mantra of shrinking government spending and mandating a business-friendly economic growth plan.
But Puerto Rico Governor Alejandro García Padilla, who in April signed on to an emergency moratorium law justifying the island's default on a $422 million payment due on May 1 - along with many mainstream island politicians, activists, labor unions, and community groups-is deeply unhappy about PROMESA's fiscal-oversight board. The board became a fait accompli in Congress after the failure of repeated attempts by Puerto Rico's non-voting representative in the House, Resident Commissioner Pedro Pierluisi, to gain support for his debt-restructuring bill after it was attacked as a "bailout" by bondholder lobbyists.
The seven-member oversight board  -four of whom would be appointed by Republicans, two by Democrats, and one by the president, with only one required to maintain a residence in Puerto Rico - would have so much authority over the island's fiscal and governmental affairs that it is seen as a throwback to the early days of US colonial rule, when the governor was a US military officer appointed by the president and the legislature was divided into an upper and lower house, with the upper house completely controlled by Washington.

We want to have a movement that makes sure that Puerto Rican lives.also matter." -Héctor Figueroa, 32BJ SEIU 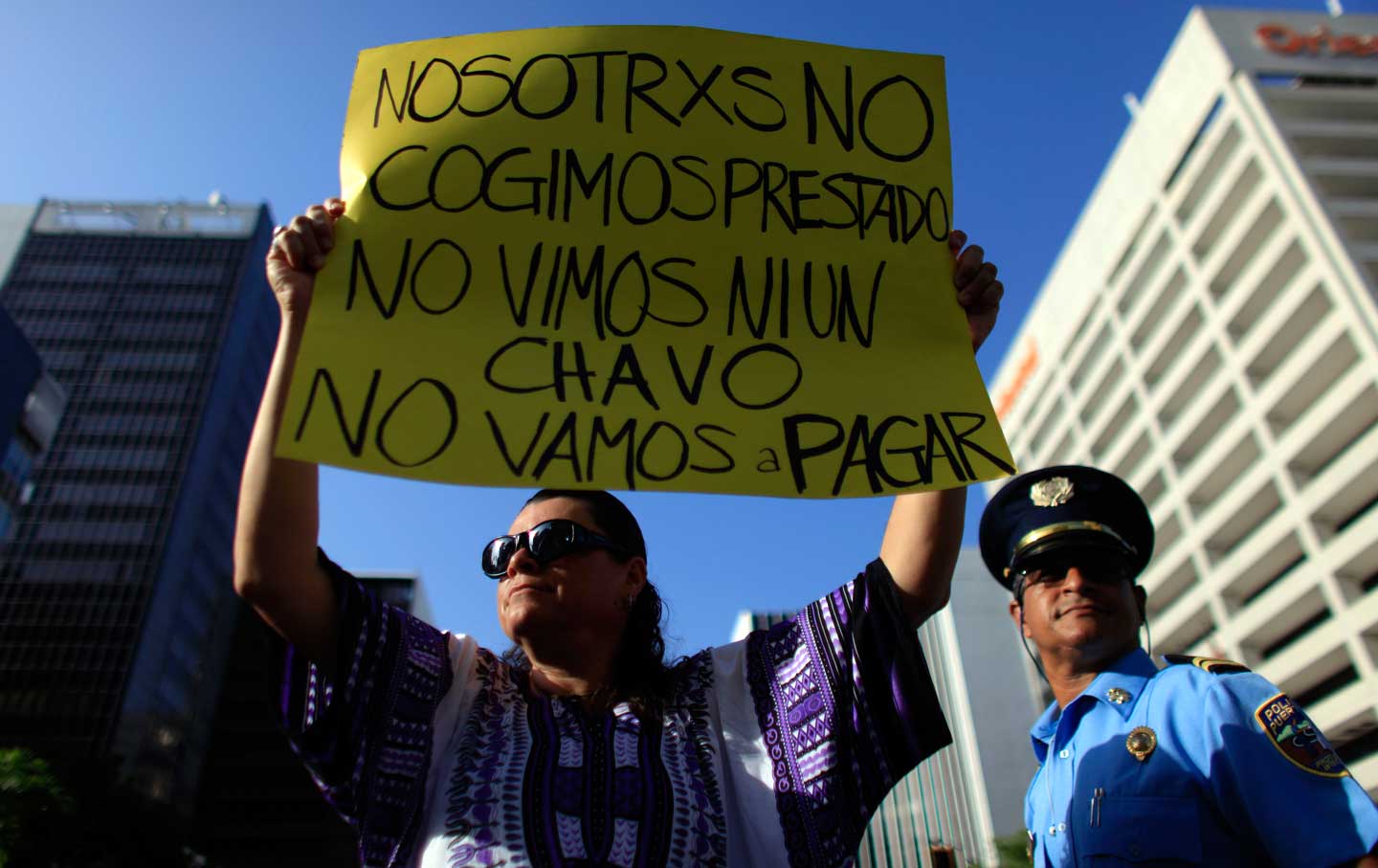 A protester holds a sign that reads in Spanish, "We didn't take out a loan. We didn't see a dime. We're not going to pay" during a protest in San Juan, Puerto Rico, on July 15, 2015.
AP Photo / Ricardo Arduengo // The Nation
A network of stateside Puerto Rican and other labor, progressive and community-based organizations committed to a sustainable future for Puerto Rico held a news conference yesterday in New York City urging members of Congress to oppose H.R. 5278, the "Puerto Rico Oversight, Management, and Economic Stabilization Act" or "PROMESA."
The draft bill released by the U.S. House of Representatives addressing some aspects of Puerto Rico's public debt crisis fails to meet standards that will protect pensions, workers' rights and democratic rights of the people of Puerto Rico.
"We are urging members of Congress to put the people of Puerto Rico first and oppose H.R. 5278 as currently written," said 32BJ President Hector Figueroa, whose organization is a member of VAMOS4PR. "But we need a real solution and Congress must get back to work immediately to provide a path forward that allows Puerto Rico to negotiate a feasible debt restructuring plan, protects workers' rights and promotes sustainable economic growth."
"H.R 5278 in its current form leaves Puerto Rico vulnerable to further economic distress, and it must be defeated. It does not protect the modest pensions of retirees, and is a further assualt on workers' rights," said Julie Kushner, Director of UAW Region 9A, an organizational member of VAMOS4PR. "Congress must go back to the table and craft a plan that creates an environment for a long-term growth economy that benefits and protects the people of Puerto Rico."
The people of Puerto Rico face an urgent humanitarian and fiscal crisis brought on by more than a decade of recession, excessive debt, and Wall Street demands for austerity. Congress must act immediately to provide a path for comprehensive debt restructuring and a sustainable economy that protects the accrued pension benefits of Puerto Rican workers and retirees, retains worker protections that apply to all working people in the U.S. including minimum wage and overtime protections and preserves the democratic rights of the people of Puerto Rico. PROMESA is unacceptable because the bill fails to meet these basic goals.
Members of VAMOS4PR, a network of stateside organizations and individuals taking a stand for a fair economy for all Puerto Ricans, will release the results of a report by Puerto Rico's Debt Audit Commission, which is in the process of preparing a complete audit of the island's $72 billion public debt. The report is scheduled to be released the same day in San Juan, Puerto Rico, by the Commission, which was appointed by Puerto Rico's legislature. VAMOS4PR believes that a complete audit of the debt will provide an essential baseline to developing measures that can best address the island's immediate humanitarian crisis and its long-term economic health. The group also believes that the report results should influence how the federal government approaches legislative proposals for Puerto Rico to restructure its debt.
Puerto Rico's Legislature passed in July 2015 a law establishing the Commission for the Comprehensive Audit of the Public Debt. The 17-member Committee, representing elected officials, representatives of financial institutions, credit unions, academics, and organized labor, has begun examining public debt incurred by the Commonwealth of Puerto Rico from 1972 to the present to determine to what extent the debt conforms to constitutional and legal norms. Current estimates are that as much as a third of the Island's debt may have been illegally obtained.
The Committee's determination could affect proposals to restructure the public debt, including the current PROMESA bill, which was last week approved by the House Natural Resources Committee and is headed for a full House vote within the next few weeks. VAMOS4PR opposed this Congressional legislation because it contains several measures that protect the interests of Puerto Rican working people. Our VAMOS4PR network believes that this survey report will help to make the case that the federal government should not rush into legislation that could lock the island into a devastating repayment plan.
A complete audit of the debt is part of the baseline principles of VAMOS4PR's work, which includes seeking to secure a restructure of Puerto Rico's public debt, protecting and expanding workers' rights in the island, advancing development proposals that sustain its economy in the long term, and educating and mobilizing the Puerto Rican diaspora and its allies.
VAMOS4PR is a network of labor, community, cultural and human rights organizations and individuals who live and work in the US mainland fighting for a fair solution to Puerto Rico's debt crisis.
For more information
Carolina Gonzalez,
cagonzalez@seiu32bj.org
929-287-4263 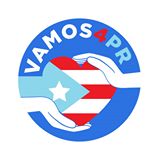