books Global Capitalism and the Crisis of Democracy

In this new book, Jerry Harris traces the links between the current stage of the development of transnational capitalism and the decline of democratic norms throughout society. Harry Targ guides us through this terrain, and, along the way, raises some critical questions about the significance of Harris's findings for today's social movements. 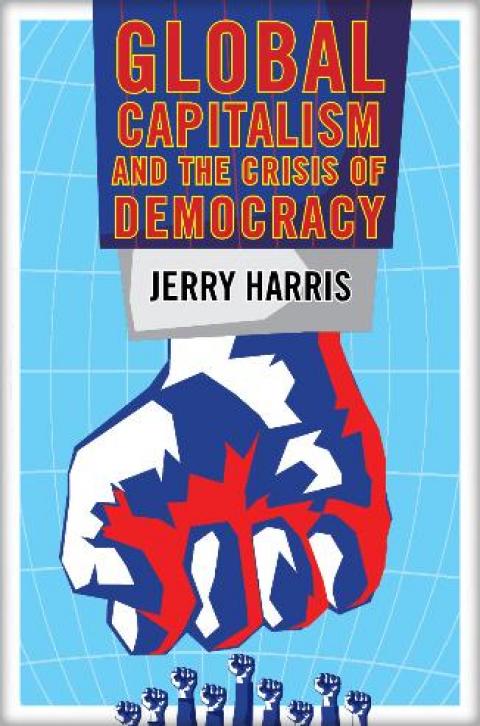 As the Berlin Wall came down and the former Soviet Union collapsed, the dominant mantra of   pundits that portrayed a world of superpower struggle between the “free world” and communism was replaced by one celebrating the “end of history.” To complement history’s end they began to describe a new world order based on “globalization.”  From the 1991 demise of the Socialist Bloc until today, libraries of books on globalization have been published. After a period of excitement about the new world order, “global celebrants” were challenged by analysts more skeptical about the meaning of the changes in international politics and economics.

The more sophisticated theorists correctly argued that the dramatic increase in cross-border economic, political, and cultural interactions was not merely the result of the collapse of the Soviet Union, or the technological revolution, or the happy dawn of worldwide production and investment. For some theorists, including Jerry Harris, globalization was not even just a byproduct of a systematic policy by international economic institutions (although it was that too) but the development of a new stage in the history and direction of capitalism. This new stage in the development of global capitalism is the subject of this book. It provides the most comprehensive analysis to date of how neoliberal globalization shapes politics, the role of the state, and the possibilities for the creation of a new kind of socialism, a twenty-first century socialism.

For Harris, neoliberal globalization is inextricably connected to the decline of democracy. The neoliberal age is based on the proposition that the pursuit of capital accumulation and profits requires the shift in the role of the state from serving the ruling class and the traditional working class, to the redistribution of wealth and power to what Harris calls a transnational capitalist class (TCC). Under the new global conditions of capitalism-a qualitative shift from manufacturing to finance; expanded cross-border manufacturing, investment and trade; and a fundamental reconstitution of the working class from a relatively secure, organized political force to an increasingly marginalized precariat-a new stage of capitalism has emerged.

The qualitative change in the global capitalist system and its class structure, Harris contends, began in the 1970s “with corporations locating more of their assets, production, and employment abroad.” As the global economy was changing and the global class fraction in each nation was gaining greater influence everywhere “the state apparatus was used to restructure laws and regulations over trade and the flow of capital.” (61)

Neoliberal policies introduced by states, international financial institutions, and trade agreements promoted downsizing state services to citizens and the privatization of public institutions. TCC- dominated global institutions demanded that most countries shift their economic profiles from production for domestic consumption to production for export. And, with the opening of doors to international capital and manufacturing, citizens, primarily workers, lost the last vestiges of their sovereign rights to determine their own destiny. By the 1980s, financial speculation was the driver of the new global economy and workers became migrants, part-time employees, and isolated atoms in a new economy devoid of any economic security and autonomy. The several hundred year momentum for building democracy was reversed with the rise of the TCC.

A substantial portion of the Harris book describes in detail the network of economic connections, financial and manufacturing, that have led to the transformation of national capitalist classes to a TCC. National capitalist classes still exist, and fractions of them conflict within national boundaries, but the development of the global economy makes the globalization of a capitalist ruling class the leading force in historical development.

Having analyzed the development of a new stage of capitalism, globalization, and an ideology and set of policies to sustain it, neoliberalism, Harris describes the dialectical development of both in two critical cases: Ukraine and China. In the Ukraine case, a national ruling class is embedded in conflict with sectors of Russian and European ruling classes. However, conflict between national ruling classes are less central to Central European politics than the deep network of economic ties between sectors of the TCC in Russia, Ukraine, the European Union, and to a lesser extent, the United States. In the Chinese case, a hegemonic Communist Party directs and supports the development of global capitalism, and while China is engaged in global competition with older capitalist powers, it too is becoming part of the network of global capitalism. Many of its key entrepreneurs are connected to the TCC.  The data Harris presents on these connections and the rich analyses of both Ukraine and China are compelling. For those theorists of neoliberal globalization who still see the hegemonic power of the nation-state system, Harris makes a powerful case for a new globalized economic and political order.

Harris then addresses the difficult theoretical and practical questions so relevant to activists: How do we save the planet and move history in a progressive direction? First, the author addresses climate change and the problematic character of the ways representatives of global capitalism seek to forestall it. On this question the fundamental contradiction remains between the processes of capital accumulation at all costs versus the recognition by sectors of the TCC that devastation of the environment has potential negative consequences for the making of profits.

As a result of the TCC concern for both profit and the environment, various movements and organizations promoting “green capitalism” have emerged. Some prominent members of the capitalist class advocate for market solutions to the environmental crisis, using taxing and trade policies to reward economic actors who reduce their misuse of air, water, and other natural resources. More advanced green capitalists argue for a Green New Deal, shifting societal resources to develop the economy in a way more compatible with the environment. They propose massive reallocation of federal dollars in the United States that could rebuild the nation’s infrastructure, emphasizing wind and solar energy, and at the same time, employ millions of marginalized workers.

After a rigorous analysis of neoliberal globalization, the rise of a TCC, and the development of a powerful argument that neoliberal globalization constitutes a qualitative new stage in the historic development of capitalism, Harris addresses the critical question for the left: what next? Drawing upon three core institutions in modern history-markets, the state, and civil society-he discusses the twentieth century shortcomings of “free market” capitalism, state-directed socialism, and anarchist rejections of both the market and the state. For him excessive emphasis on any one of these reduces the probability of creating full democracies.

A twenty-first century socialism, based on the thinking of analysts such as Marta Harnecker, David Schweickart, and Gar Alperovitz, and the concrete experiences of worker cooperatives in Spain and North America, and the effort to build cooperatives in Cuba, Venezuela, and Italy, constitute an alternative to neoliberal globalization. Although each can and should be critiqued,  existing proposals and experiments use markets as ways to distribute goods, encourage and rely on state support for building institutions at the base without creating centralized bureaucratized socialism, and  facilitate and reconstitute civil society while not rejecting the contributions markets and the state can make. A central premise of Harris’ thinking is the value of building alternative institutions today which might serve as a skeletal form of a new society.

Global Capitalism and the Crisis of Democracy is a seminal work which addresses the major questions raised by the vast critical literature on neoliberal globalization. It addresses markets, the state, civil society, the transforming working class, the environment, and the draconian reversal of the historic drive to create real democracy. It accumulates a dense collection of data on financial speculation, investment, and trade to demonstrate the growing network of cross-national ties that bind a new transnational capitalist class.

This volume should be read and used in classrooms and study groups to stimulate a conversation about the new era of neoliberal globalization and the prospects for building twenty-first century socialism. Two prominent elements of the new global order should become part of these conversations, elements that did not receive adequate attention in the Harris book. First, the discussion of the military-industrial complex and its integration into the TCC needs to be expanded. Also, the techniques of empire, mentioned briefly, need to be more rigorously connected to the cross-national economic ties, the forced transformation of the working class, and the rise of protest against neoliberal austerity.

Second, while Harris makes a compelling case for the existence of a TCC, he does not sufficiently address the existence or possibility of the emergence of a transnational working class (TWC). Data-based research and anecdotal evidence suggests a dramatic upsurge in protest activity and progressive political organization all across the globe. One research project, counting protest activities over the last decade, found a dramatic upsurge of public protests in over eighty countries. Half of these protest events were motivated by opposition to austerity policies and/or included demands for democratization. The optic of protestors in Tahrir Square in Cairo sending money to buy pizzas for protestors in Madison, Wisconsin is a powerful metaphor. In the end a Transnational Capitalist Class must be challenged by a Transnational Working Class at the same time as workers everywhere build vibrant alternative economic and political institutions.

Harry Targ teaches foreign policy,US/Latin American relations, international political economy, and topics on labor studies in the Department of Political Science and a program in Peace Studies, at Purdue University. He sees connections between theory/education and political practice. Targ is a member of the Committees of Correspondence for Democracy and Socialism (CCDS), the Northwest Central Labor Council (AFL-CIO),and the Lafayette Area Peace Coalition (LAPC). His book, Diary of a Heartland Radical, can be ordered here. He can be reached at targ@purdue.edu.